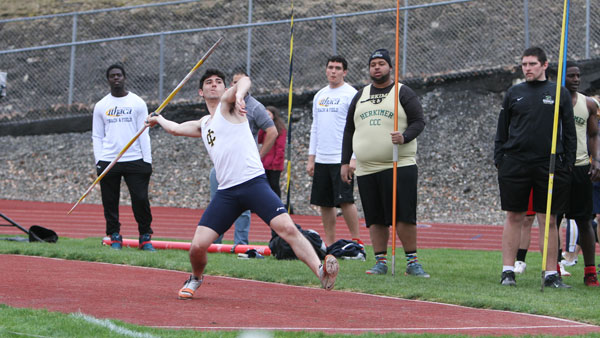 Jennifer Williams/The Ithacan
Sophomore Aaron Matthias prepares to throw the javelin during the Ithaca Tuesday Meet on April 22 at Butterfield Stadium. Matthias finished fifth overall in the event, as his best toss was 141.42 feet.
By The Ithacan — Ithacan Staff
Published: April 23, 2014

The men’s tennis team improved its record to 7–6 after coasting to a 9–0 victory against Elmira College in a dual match April 16 in Glazer Arena.

The Blue and Gold swept the doubles matches to build an early 3–0 lead. Senior David Andersen and freshman Wes Davis collected an 8–4 win in the first doubles, followed by sophomore Chris Hayes and senior Griffin Reid with an 8–3 win in second doubles.

The first five singles sets were decided in straight sets, including sophomore Joey Hanf and Davis, who clinched the team victory with their singles victories. Hayes pulled out a 6–3, 7–5 win at third singles, before Reid pulled off a comeback victory at first singles. After going down 6–3 in the first set, Reid stormed back to win the next two sets 6–2, 10–6.

The Bombers will play the Alfred University Saxons at 4 p.m. April 25 in Alfred, N.Y.

The No. 16–ranked women’s lacrosse team won a 13–6 matchup at Stevens Institute of Technology on April 18. The win secured the Bombers sole possession of first place in the Empire 8 conference.

The Bombers jumped out to a 6–0 lead in the first half before the Ducks could score. Stevens struck first in the second half and managed to trim the Blue and Gold’s lead down to 10–6. But the Bombers tallied three additional second-half goals to seal the victory. Sophomore attack Ally Runyon, sophomore midfielder Riley Marion and junior midfielder Molly Fischer each scored a hat trick in the contest. Freshman goalkeeper Emily Ross had seven saves.

The South Hill squad continued its winning-ways on the road with a 13–8 win against Hartwick College on April 19. The Bombers scored eight unanswered goals within the first 11 minutes of the match but cooled off after that, going into the half with a 9–5 lead. Runyon scored five goals in the matchup, bringing her to 41 goals scored this season. Marion notched another hat trick and also contributed with an assist.

The Blue and Gold will wrap up the regular season against Utica College at 4 p.m. April 24 at Higgins Stadium.

The women’s crew team faced Colby, New Hampshire, William Smith College, Connecticut College and the on April 19 also on Lake Quinsigamond. The Bombers’ top Varsity 8 boat took second place, finishing with a time of 6:46.37. The Blue and Gold’s second Varsity 8 boat recorded a time of 7:11.54, which gave them a third–place finish in the second varsity 8 race.

Both squads return to the Bay State to compete at 8 a.m. April 26 in Williamstown, Mass. The men will face Williams College, and the women will take on the United States Coast Guard Academy and Williams.

The Blue and Gold advanced their record to 11–3 with a 19–7 win against Hartwick College on April 19 in Oneonta, N.Y. The win also marked four in a row for the Bombers.

The Blue and Gold will return to action for their last regular season game against Stevens Institute of Technology at noon April 26 at Higgins Stadium.

The women’s golf team took home first-place honors with a team stroke count of 644 at the Jack Leaman Invitational from April 19–20.

Junior Sharon Li finished second overall individually with a 76 in round one and a 77 in round two. The Bombers defeated No. 4–ranked Williams College and No. 25–ranked Middlebury College in the match.

The Bombers will play in the Williams Northeast Elite Invitational from April 26–27 at the Taconic Golf Club in Williamstown, Mass.

Against Fisher, senior pitcher Sam Bender picked up the win in the first game. She struck out three batters in five innings and did not give up any runs or walks. Sophomore catcher Kelly Robichaud led the Bombers at the plate, as she went 3-for-3 with a home run, two RBIs and three runs scored.

Sophomore pitcher Laura Quicker struggled in game two and was pulled after giving up seven runs, though only three runs were earned. Fellow sophomore pitcher Allison Macari came in to relieve Quicker, and she struck out four and gave up three unearned runs.

The South Hill squad bounced back with two wins against Stevens. Bender threw two complete games, including a shutout in game one. Junior infielder Francesca Busa knocked in sophomore infielder Casey Gavin with a double to score the only run of the first game. Folk went 2-for-3 with a double as well.

The Blue and Gold will play a doubleheader against Union College beginning at 3 p.m. April 24 on Kostrinsky Field.

Before beating the Cardinals, the Bombers began the week on a low note, dropping a 6–0 decision to the University of Rochester on April 16.

However, the Blue and Gold bounced back to split the first doubleheader with Fisher on April 18. The Bombers had a seven-run sixth inning to come back from a 2–0 deficit and beat the Cardinals 7–2 in the first game. Senior center fielder Luke Stark and junior catcher Cooper Belyea led the team’s offense with two hits each. Junior pitcher John Prendergast picked up the complete-game victory, and his eight wins are the best for the South Hill squad.

The Bombers then lost the second game of the day to St. John Fisher by a score of 3–2 but rebounded April 19 to sweep the second doubleheader. In the first game, the Blue and Gold won 6–5 thanks to multiple-hit games from junior right fielder Christian Brown and junior third baseman Matt Connolly. The Bombers then pulled out an 11-inning victory in the final game of the series when Brown scored the go-ahead run on a wild pitch with the bases loaded.

The Bombers will hit the road again and play SUNY New Paltz in a doubleheader at 1 p.m. April 26 in New Paltz, N.Y.

The men’s track and field team won its eighth straight Empire 8 Outdoor Championship on April 19 at St. John Fisher College. The Bombers finished first with a 72-point lead and reached five Eastern Collegiate Athletic Conference qualifiers during the meet. Junior Rashaad Barrett had the strongest performance after earning second place in the 200-meter dash and first place in the 100-meter dash with a time of 11.01 seconds.

The Blue and Gold also competed in the Ithaca Tuesday Meet on April 22 at Butterfield Stadium. The Bombers’ pole vaulters earned first through ninth place, with senior Jarrod Monacelli at the top of the leaderboard.

The women’s track and field team won its 10th Empire 8 Championship on April 19. Freshman Brandy Smith rewrote history in the discus with her 43.23-meter throw, breaking the college record set back in 2001. Junior Emilia Scheemaker took first place in the triple jump.

In the Tuesday Meet, the Bombers took the first 11 places in the 200-meter dash, as junior Harmony Graves took first place overall, finishing in 26.33 seconds.

Both squads will compete next at the Penn Relays from April 24–25 in Philadelphia.