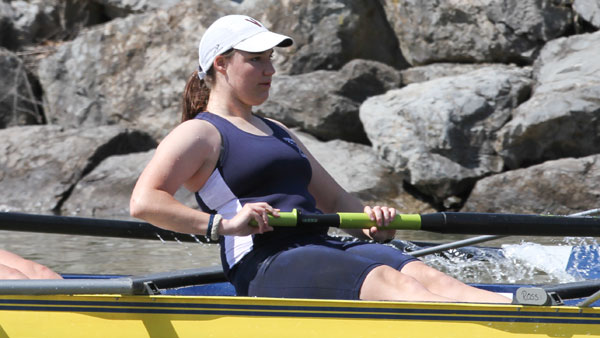 The baseball team continued its winning streak, posting a 5–0 record during the past week to improve its overall record to 19–5.

The Blue and Gold then swept Utica College in a four game series from April 12–13. Senior second baseman Tim Henry hit a walk-off single in the first game of the series to give the Bombers the 3–2 win. Prendergast improved to 7–0 on the season, collecting the win in the first game April 13. In the same game, sophomore shortstop Stephen Yanchus hit his first collegiate home run, a solo shot in the fifth inning off of Utica sophomore pitcher Joshua Webb.

Senior first baseman Colby Gee and freshman catcher Ryan Henchey led the way for the Bombers in the fourth game against Utica. The pair had six hits, six RBIs and two runs scored as the Blue and Gold topped the Pioneers 10–3.

The Bombers will take on St. John Fisher College in a four-game set from April 18–19 in Rochester, N.Y.

The men’s tennis team fell short in its non-conference dual match 8–1 against The College of New Jersey on April 13 in Ewing, N.J. The Bombers dropped to 6–6 with the loss.

In singles completion, Reid and Passman lost in two sets. Levine lost his first set 6–3 but came back to win his second 7–5, bringing the match to a tiebreaker. However, Levine could not secure the victory, losing the tiebreaker 11–9. Davis claimed the Bombers’ only win of the dual match, defeating sophomore Dan Presuto of TCNJ in a tiebreak set 10–6.

The Blue and Gold will face Alfred University for a conference dual match 4 p.m. April 25 in Alfred, N.Y.

The men’s crew team completed another sweep April 12, successfully defeating both Skidmore College and St. Lawrence University in its final meet on Cayuga Inlet of the season.

Both squads will be back on the waters in a quad meet at 9:30 a.m. April 19 on Lake Quinsigamond in Worcester, Mass.

The women’s lacrosse team won both of its games this past week, adding to its seven-game winning streak. First, the Blue and Gold defeated Nazareth College 12–5 on April 12 in Rochester, N.Y.

The Bombers are now 4–0 in Empire 8 Conference play. The team returns to action at 12 p.m. April 18 in Hoboken, N.J., against Stevens Institute of Technology.

The golf team began spring play at the Vassar College Invitational from April 12–13 at Dutchess Golf & Country Club in Poughkeepsie, N.Y. The Bombers took second place at the event with a total of 650 strokes.

Junior Sharon Li tied for the top individual performance, shooting a 78 on day one and a 76 on day two. Her play earned her a spot at  the top of the leaderboard along with SUNY Cortland senior Rebecca Studin. Junior Kelsey Baker and freshmen Kimberley Wong and Lisa Calcasola also finished in the top 20.

The Blue and Gold will compete in the Jake Leaman Invitational from April 19–20, playing in Amherst, Mass., and South Hadley, Mass.

The men’s track and field team competed in both the Moravian College Coach P Invitational and the Bucknell Bison Outdoor Classic on April 12. A few of the team’s distance runners traveled to the Bucknell meet and hit three Eastern Collegiate Athletic Conference qualifiers. The rest of the team headed to Moravian where the squad had 18 top-10 finishes. Senior Jarrod Monacelli earned third place in the pole vault after clearing 4.4 meters, and sophomore Larkin Bohanan had a third-place finish in the 800-meter run, finishing in 1:57.39.

The women’s track and field team also travelled to Moravian and reached 15 ECAC qualifiers. Sophomore pole-vaulter Alex Rechen earned second place and tied the college’s record with a 3.5-meter clear. Senior Shannon Meehan finished fifth in the pole vault clearing 3.35 meters. Junior Emilia Scheemaker took first in the triple jump, with a leap of 11.68 meters, and junior Leigh Martino crossed the line in first in the 400-meter at 1:05.12.

Both squads will attempt to defend their Empire 8 Championship titles beginning at 10 a.m. April 19 at St. John Fisher College.

The No. 12–ranked men’s lacrosse team defeated Utica College 20–4 on April 9 at Higgins Stadium. The Blue and Gold opened the game on a 9–0 run, as 12 different Bombers scored in the blowout win.

Freshman attack John Januszkiewicz recorded a game high of six goals, totalling to 31 goals on the season. Senior attackers Jake Long and Pat Slawta each had two goals to help propel the Blue and Gold’s offense.

The South Hill squad won another home contest April 12 with a 10–8 win against the Nazareth Golden Flyers. The Blue and Gold are now in first place in the Empire 8 conference.

Freshman midfielder Justin Bird opened the game with a goal, but the Golden Flyers had three consecutive goals from senior midfielder Brian Wright, junior attack Kyle Fanning and junior attack Will Fallo. Before the end of the quarter, Slawta and Long answered with goals of their own. The teams scored two goals each in the second quarter and entered the half tied 5–5.

The Golden Flyers never attained another lead in the second half. Long scored his hat trick goal early in the third quarter, and two penalties against Nazareth allowed the Bombers to maintain possession for the final minutes to finish with a 10–8 win.

The Bombers will play Hartwick College at 3 p.m. April 19 in Oneonta, N.Y.

The softball team won two games in a pair of doubleheaders from April 12–13. The Blue and Gold hosted Utica College on April 12 and split the series, winning game one 7–3 and dropping the second 9–6.

Senior Sam Bender started the first game on the mound and had two strikeouts while allowing three runs. After the fifth inning, sophomore pitcher Laura Quicker came in to relieve Bender and was able to keep the Pioneers from scoring in the last two innings.  At the plate, sophomore first baseman Casey Gavin was 4-for-4, and senior infielder Sydney Folk hit two doubles and knocked in two runs.

Sophomore catcher Kelly Robichaud hit a three-run home run in the first inning to put the Bombers up 4–0. Quicker started as pitcher in the second game against Utica. Quicker allowed seven runs in the fourth inning, but only two runs were earned.

Bender was the starting pitcher in the first game against Elmira College on April 13. Bender had three strikeouts and only allowed one run to score in six innings. Freshman outfielder Jessie Fleck went 2-for-2 at the plate and Gavin went 2-for-3, but the Bombers couldn’t muster a run and were shut out by the Golden Eagles 1–0.

In the second game, the Blue and Gold won an 11-inning marathon, 3–1. Quicker pitched all 11 innings, and she had three strikeouts, allowing six hits and one run. Sophomore outfielder Erin McQuillan scored the game-winning run in the top of the 11th inning.