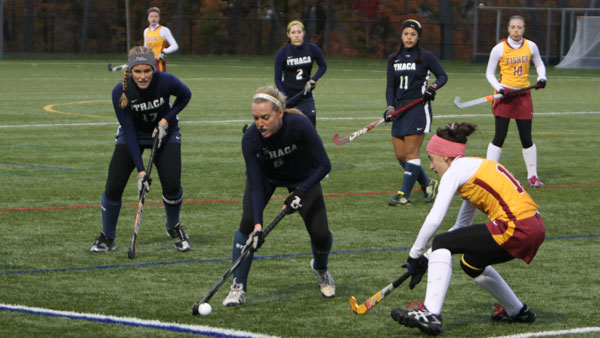 The field hockey team won its only game during a record-setting week. The Bombers defeated the St. John Fisher Cardinals 5–2 on Oct. 26 at Higgins Stadium. The squad (9–6, 3–3) has its most wins in a season in more than ten seasons.

The Cardinals scored quickly in the first half, scoring their first goal in the third minute. The South Hill squad responded a short time later, with 2 goals in 2 minutes. St. John Fisher slid another goal past freshman goalkeeper Katie Lass later in the first half, but junior Danielle Corio responded with a goal, giving the Bombers a 3-2 lead.

The Bomber defense stood strong for the rest of the competition, only allowing nine shots in the second half. Forwards, sophomore Olivia Salindong and senior Katie Kennedy each tacked on a goal in the second half to give the Bombers the win.

The Bombers will host their final two games of the season starting with Hartwick College at 1 p.m. Nov. 2 and SUNY-Geneseo at 4 p.m. Nov. 5. Both games will be at Higgins Stadium.

In his first varsity game, freshman running back Evan Skea ran for 62 yards on 20 carries, including a touchdown to put the Bombers ahead 19-7 early in the third quarter.

The Bombers defense forced five Cardinal turnovers, including an interception with two minutes left in the fourth quarter by graduate student linebacker Will Carter.

“It is a huge win for our team,” Carter said after the game. “We knew that we had a performance like this in us, and it was a great team victory for us.”

The Bombers (6–1, 4–1) will take on the Frostburg State University Bobcats at 1 p.m Nov. 2 at Butterfield Stadium.

The men’s soccer team traveled to Nazareth College on Oct. 26 to face the Golden Flyers. The game was scoreless for the first half and most of the second until the Bombers found the back of the net for the first time in the 86th minute.

Sophomore midfielder Blair Carney scored his second goal of the season to give the Bombers a 1-0 win. Junior goalkeeper Jordan Gentile recorded seven saves in goal for the Bombers.

The Bombers (4–10, 3–2) followed their win with a showdown Oct. 27 against rival SUNY-Cortland on Carp Wood Field. For the second straight game, the Bombers were in a scoreless tie with their opponent heading into halftime, but Cortland broke the deadlock, and defeated the Bombers 1–0.

In the 72nd minute, senior midfielder Sam Kirschenbaum scored for the first time during the season. The Bombers started sophomore Kenny Chapman in goal, who had one save and allowed a goal on the only two shots on goal from the Red Dragons. Freshman Scott Halpern led the Bombers with 2 shots on goal.

The women’s soccer team played just one game last week, but recorded a significant win against Stevens Institute of Technology.

The Bombers (14–1, 6–0) dominated the Ducks 4-0 and ensured themselves the top seed and home field advantage in the Empire 8 tournament. Senior Ellyn Grant-Keane, junior Jessie Warren, sophomore Kelsey King and freshman Jocelyn Ravesi each scored a goal for the Blue and Gold.

Seniors Jamie Ruddy and Anna Gray, Warren and King, also recorded assists for the Bombers. The squad will begin Empire 8 conference tournament play Saturday Nov. 9 with its time and opponent to be determined.

Sophomore Jaime Lisack led the Blue and Gold on the 6K course with a season-best time of 23:12. Lisack finished eighth out of 129 runners. Junior Carolyn Malone finished with a time of 23:24 to place 10th.

Placing in the top five each of the last six seasons, the men’s cross country team recorded a fourth-place finish out of 12 teams at its NYSCTC championships.

Freshman Sean Phillips led the Bombers on the 8K course, placing 10th out of 127 runners finishing in 27:02. Junior Dennis Ryan clocked in behind Phillips at 27:06 to place 11th.

Both teams will return to action on Saturday, Nov. 2 to defend their respective Empire 8 titles at the conference championships in Saratoga Springs, N.Y.

The sculling team traveled to the Head of the Fish Regatta on Oct. 26 in Saratoga Springs, N.Y.

Four doubles raced for the Bombers, including seniors Anna Schenk and Julie Schaeffer took the top spot in the doubles event with a time of 15:00.53. Graduate Student Megan Barry and her doubles partner senior Dominique Lessard finished fifth with a time of 16:04.65. The final two boats, seniors Stevie Theoharidis and Maureen Gildea and seniors Lindsay Beatty and Madison Averett, finished seventh and eighth, respectively.

Head women’s crew coach Becky Robinson and sculling coach Beth Greene also raced as a pair at the event and placed first out of 23 other master crews. They completed the course with a total time of 14:37.45.

The Bombers sculling team will finish off their fall season on Nov. 3, when they will travel to Mercer, N.J. for the Small Boat Collegiate Championships.

The men’s and women’s swimming and diving teams opened up their 2013-2014 season on Oct. 26 at Rensselaer Polytechnic Institute in Troy, N.Y.

The women’s squad defeated RPI 183–111. Junior Kylie Bangs, freshman Grace Ayer, junior Lyndsay Isaksen and sophomore Megan Zart captured the first victory for the Bombers in the 200-yard medley relay with a time of 1:53.52. Bangs also took the top spot in the 100-yard backstroke with a time of 1:02.50. Graduate student diver Heather Markus placed first in both the 1-meter and 3-meter dive events .

Both squads will get back to action at 1 p.m. Nov. 2 when they take on the SUNY-Cortland Red Dragons at the Athletics and Events Center Pool.

The volleyball team had another strong week, with a 2–1 record at the Empire 8 Crossover tournament in Rochester, N.Y., followed by a win at home against Wells College.

The Bombers began the weekend with a win 3–2 against St. John Fisher College on Oct. 25. The South Hill squad outlasted the Cardinals through five sets, led by freshman outside hitter Shaelynn Schmidt who posted a season-high 24 kills. The Blue and Gold kept things rolling, splitting a pair of games on Oct. 26. In a 3–0 win against Alfred University, freshman setter Molly Brown led the team with 13 assists. In the second match of the day, a 0–3 loss to Elmira College, junior middle Rylie Bean finished with four blocks.

The Bombers collected a 3–0 win against Wells College on Oct. 29, which was also senior night. Playing in her final regular-season home match, senior outside hitter Justine Duryea led the Bombers recording 13 kills.

The Bombers will finish out the regular season at the Oneonta Dig Pink tournament on Friday.