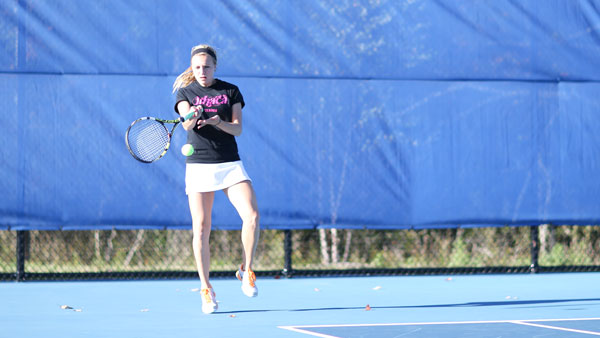 Durst Breneiser/The Ithacan
Junior Alyssa Steinweis hits the ball during the Blue and Gold’s Empire 8 contest against Hartwick College on Oct. 8 on the Wheeler Tennis Courts. The South Hill squad defeated the Hawks 9–0.
By The Ithacan — Ithacan Staff
Published: October 10, 2013

The football team lost to Hartwick College on Oct. 5 in Oneonta, N.Y., for the first time since 2007, 21–9. The Bombers (3–1, 1–1) committed five turnovers on offense and lost senior quarterback Phil Neumann to an elbow injury.

Neumann was sacked twice including a strip sack on the Blue and Gold’s first play of the second half. Hartwick junior defensive tackle Jason Brown recovered the fumble and returned it 16 yards to make it 21–0 Hawks. Hartwick made it 14–0 on the previous play when sophomore quarterback John Garcia found junior wide receiver John Horner for a five-yard touchdown pass.

Junior Tom Dempsey replaced Neumann in the fourth quarter and threw an 18-yard touchdown to junior wide receiver Joel Lynch but also threw two interceptions. Neumann threw an interception in the red zone in the third quarter. He was pulled two plays later.

The women’s soccer team (9–1–0, 3–0–0) played just one game this last week, but came out with one of its biggest wins of the season defeating No. 9 Misericordia University 1–0 on Oct. 2 at Carp Wood Field. The win was especially important for the Bombers because the Cougars beat them in penalty kicks in last year’s NCAA Sweet Sixteen round, eliminating the Blue and Gold from the national tournament.

However, the Blue and Gold took the lead early and never looked back. Senior forward Ellyn Grant-Keane scored at the 10:14 mark with a rip into the upper-left corner of the goal, and sophomore Beth Coppolecchia tied a season-high with seven saves en route to her fourth complete-game shutout of the season.

The Bombers face Elmira College in Elmira, N.Y., on Oct. 12, as the team looks to remain undefeated in Empire 8 play.

Junior Alexa Rick had a season-best time of 22:45:70, good for 17th place out of 268 runners and leading the Bombers overall. Graduate student Jenn Randall followed in at second, clocking in at 23:25.20 for 41st place.

Following three top-five finishes as a team to start the season, the men’s cross-country team placed ninth at the 33rd annual Geneseo Invitational on Saturday at Letchworth State Park.

Both the women’s and men’s teams will race next at noon on Saturday at the Hamilton Invitational in Clinton, N.Y.

The golf team secured a third place finish with a two-day total of 643 on Oct. 5–6 at the Williams Falls Classic in Williamstown, Mass.

Junior Sharon Li led the Bombers shooting an 80 and 76 for a total 156. She finished sixth overall in the individual standings. Freshman Kimberley Wong tied for 10th as an individual and finished with a two-day total of 158 tying her personal best. Senior Amanda Failla finished with a 163 (82–81), her best at Williams by four strokes.

Junior Kelsey Baker posted a 169 (84–85) and recorded a personal best score at the invitational by just one stroke. Freshman Lisa Calcasola traveled as an individual to the invitational and finished with a 170 (81–89).

The Bombers finished behind Williams College, who ended with a 629, and Middlebury College, who rounded off the weekend with a 639. Bomber head coach Dan Wood said the difference was that the team had “too many double and triple bogeys.”

The Bombers will travel to Springfield, Ohio this weekend for the Wittenberg Invitational and wrap up the fall season. The squad will play nationally ranked teams including No. 4 DePauw University and No. 15 Wittenberg University.

The sculling team sent five boats to Rochester, N.Y., on Oct. 5 to compete in the Head of the Genesee regata, marking the team’s second event of the fall season.

All five boats were doubles and competed in the women’s doubles open event. The Bombers’ first boat of seniors Dominique Lessard and Julie Schaeffer took fourth place, completing the race in a net time of 20:55:99 and a total time of 40:11.14. Behind them were the other three pairs that raced this weekend, which included the senior boats of Stephanie Zang and Stevie Theoharidis and Maureen Guildea and Anna Schenk. Senior Caroline Dykstra and sophomore Sarah Muroski were also in the pack.

The Bombers will race on Sunday at the Seven Sisters Sculling Regatta in Amherst, Mass.  They will take on Division I teams such as the University of Massachusetts Amherst and Division III teams like Tufts University.

The volleyball team had a tough weekend, losing all three of its matches. In the opening game of the Nazareth Purple and Gold Invitational, the Bombers were shut out by the tournament host Nazareth College. Freshman middle Shaelynn Schmidt led the team with eight kills.

On day two of the tournament, the squad dropped a pair of matches, as they were shut out again by Buffalo State University and SUNY-Plattsburgh. Freshman setter Molly Brown recorded 12 assists to lead the team in the first match while freshmen Grace Chang and Schmidt led the Bombers offensively with seven kills each in the final match of the weekend.

The Bombers will take on Utica College, Medaille College, Wells College and Messiah College in their next four matches when they host the Ithaca Tournament this weekend.

The women’s tennis team built on its perfect 6–0 record after defeating previously undefeated Stevens Institute of Technology 5–1 on Oct. 6. Inclement weather shortened the match, causing play to stop once a winner was determined. The Bombers took care of doubles play with two of three victories and swept the Ducks for three wins on the singles side. Juniors Alyssa Steinweis and Allison Vizgaitis started the Bombers off with an 8–1 victory. Sophomore Marni Blumenthal and freshman Haley Kusak followed them up with a 8–4 victory. Bluemnthal, Steinweis and junior Carly Siegel earned the singles victories for the Bombers.

On Oct. 8, the Bombers defeated Empire 8 Conference competitior Hartwick College by a score of 9–0. This win improved the team’s record to 8–0.

The Blue and Gold will compete next in the New York State Championships from Friday through Sunday on the Wheeler Tennis Courts.

The Bombers field hockey team finished with a 1–2 record this week, with two games against Empire 8 competitors. On Oct. 2, the Utica College Pioneers blanked the South Hill squad, 4–0. In the first half, freshman goalkeeper Katie Lass gave up a single goal off of a penalty corner, but allowed three in the Bombers second-half struggle.

The Bombers travelled to Nazareth College on Oct. 5, where junior forward Danielle Coiro and senior Katie Kennedy netted two goals, giving them a 2–0 advantage. The Golden Flyers cut the Bombers’ lead late in the second half, but held on to give the Bombers a 2–1 win.

Finally, the Bombers hosted No. 16 University of Rochester on Oct. 8 at Higgins Stadium, and the Yellowjackets outlasted the Bombers 4–1. Coiro was the only player to score, as the South Hill squad was outshot 14–5.

The Blue and Gold will travel to Houghton College on Saturday where they will take on the Highlanders and then will host the William Smith College Herons on Oct. 15.

The men’s soccer team was scheduled to play its second Empire 8 conference game of the season Oct. 5 at Alfred University, but the game was postponed because of bad weather. The game was rescheduled for Oct. 22.

The Bombers hosted Hamilton College on Oct. 8. In the 22nd minute of the game, the Continentals committed a foul in their box, resulting in a penalty shot for the Bombers. The original shot was saved, but junior midfielder Brandon Glass got the rebound off his shot and put it in the back of the net, marking his first goal of the year and giving the Bombers an early 1–0 lead.

It was a defensive battle the rest of the way, but the Blue and Gold found the back of the net in the last minute of the game. Freshman forward Alex Leone scored his first career goal on a pass from freshman striker Sean Forward. The 2–0 win gives the Bombers their second win of the season, improving to 2–7.

The South Hill squad will take on  Elmira College at 1 p.m. Saturday on Carp Wood Field.