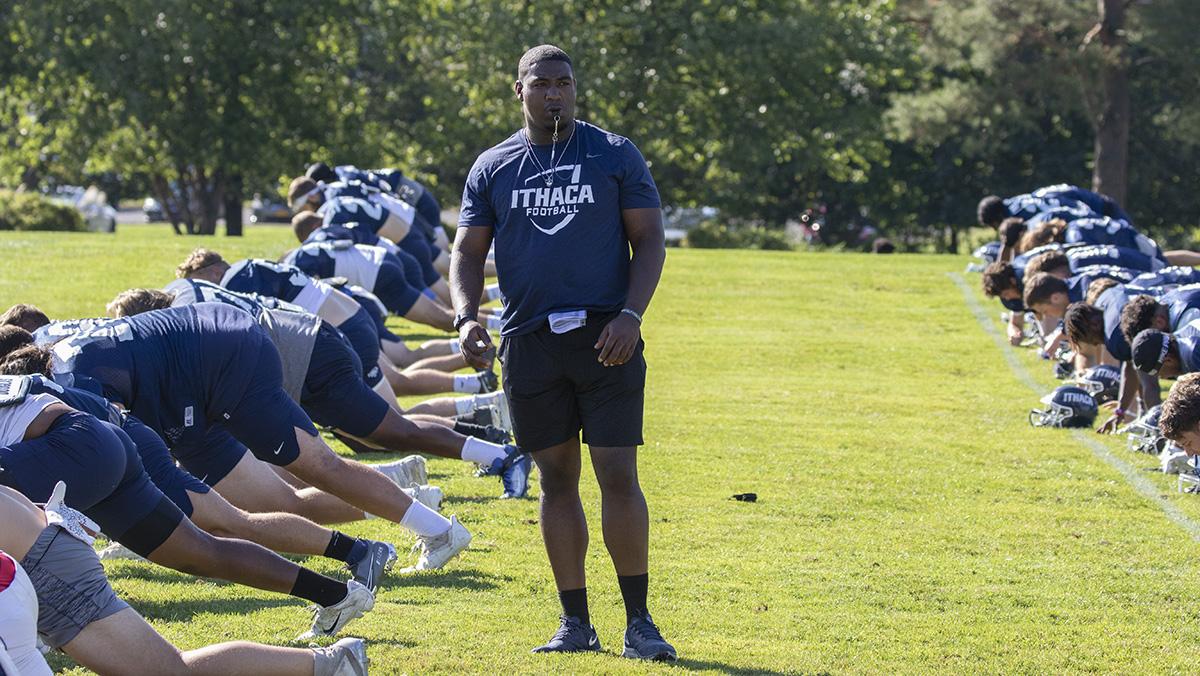 On July 26, Kerry Grigsby was announced as the new defensive line coach for the Ithaca College football team following three years as an assistant coach at Division II Concordia University in St. Paul, Minnesota. Later in the summer, Caroline Pape was hired as a new full-time assistant coach for the Ithaca College women’s lacrosse team Aug. 10 after spending two seasons at Fairleigh Dickinson University-Florham in Madison, New Jersey as an assistant and defensive coordinator. The following day — Aug. 11 — it was announced that Torin Varn would be returning to the Bombers as a full-time assistant for the men’s lacrosse team after coaching as a voluntary assistant coach for the team in 2020.

Grigsby spent his first two years at Concordia University as a graduate assistant before assuming the role of assistant linebacker coach in 2020. The coach last manned the sidelines in 2019, because the 2020 season was canceled due to the COVID-19 pandemic. When senior defensive lineman Ed Longest heard that Grigsby would be joining the Bombers coaching staff, he said he was thrilled to learn of the news.

“I couldn’t have been more excited to get to play for Coach Grigsby,” Longest said. “His experience and his knowledge is elite. He’s coached guys like Chris Garrett, who’s now playing for the [Los Angeles] Rams, so I was fired up to [be able to] get to learn from coach.”

Throughout the team’s practices during the summer and pre-season, Longest said he loves the energy and detail Grigsby brings to practice daily.

“His attention to detail and his passion for the game is infectious and has really helped push and motivate the entire unit,” Longest said. “He holds us accountable and pushes us to reach our full potential.”

As Longest embarks on his senior season, he said he believes Grigsby will be able to help him take his game to the next level.

“Through camp and the early part of the season, I’ve really appreciated the way that coach had pushed and challenged me to never be satisfied,” Longest said. “He’s helped me see just how much I have left in the tank and see the areas that I can really improve in as a ballplayer.”

Although the men’s and women’s lacrosse teams are not in season yet, the new hirings have generated buzz within the teams. Senior women’s lacrosse defender Mallory Chamberlain said she is excited to get to work with a successful coach like Pape.

“She’s an amazing leader as a coach,” Chamberlain said. “The leadership that she brings from being a previous leader on her team, to now being an assistant coach, will help us a lot.”

Pape will be the full-time assistant coach for the Bombers this upcoming season, but has experience on both sides of the field. Chamberlain said she believes that Pape’s knowledge of the sport will be of great use to the team.

“She can see that it’s not just an individual game, she coaches us as a unit,” Chamberlain said. “We need to be communicating on the left and on the right. The way she’s talking makes us want to work harder with each other.”

The Bombers went 14-2 in 2021 and made it to the quarterfinals of the NCAA Tournament. It was the second time in program history that the team made it that far into the tournament, and Chamberlain said she feels Pape can help elevate the team even further.

Head coach of the Ithaca College men’s lacrosse team, Jeff Long, said Varn’s familiarity with the program and the region made the hiring an easy fit. Varn is from the local Ithaca area and played lacrosse at Ithaca High School. Between his year as a volunteer assistant and his recent hiring, Varn spent the 2020 season as a volunteer assistant coach for the Cornell University men’s lacrosse team. Because of his lacrosse experience in Ithaca, Long knows what type of player and coach Varn is.

“[I] watched him from a young age. [He is] very skilled, competitive, great IQ and [has a high ceiling as a coach],” Long said.

During the season Long spent coaching with Varn, he complimented numerous aspects of his style. Long said Varn is extremely positive, is a good communicator with his players and can teach players at all positions. Long also added that he and his players are excited to get started with Varn with him now as a full-time assistant.

Each of these coaches will look to make an impact on their respective teams when they return to the field this year. Grigsby and the college’s football team will look to improve upon its 1-0 record as it takes on No. 20 SUNY Brockport on Sept. 11 in the squad’s first road game of the season.

Grigsby, Pape and Varn did not respond to The Ithacan’s interview requests.