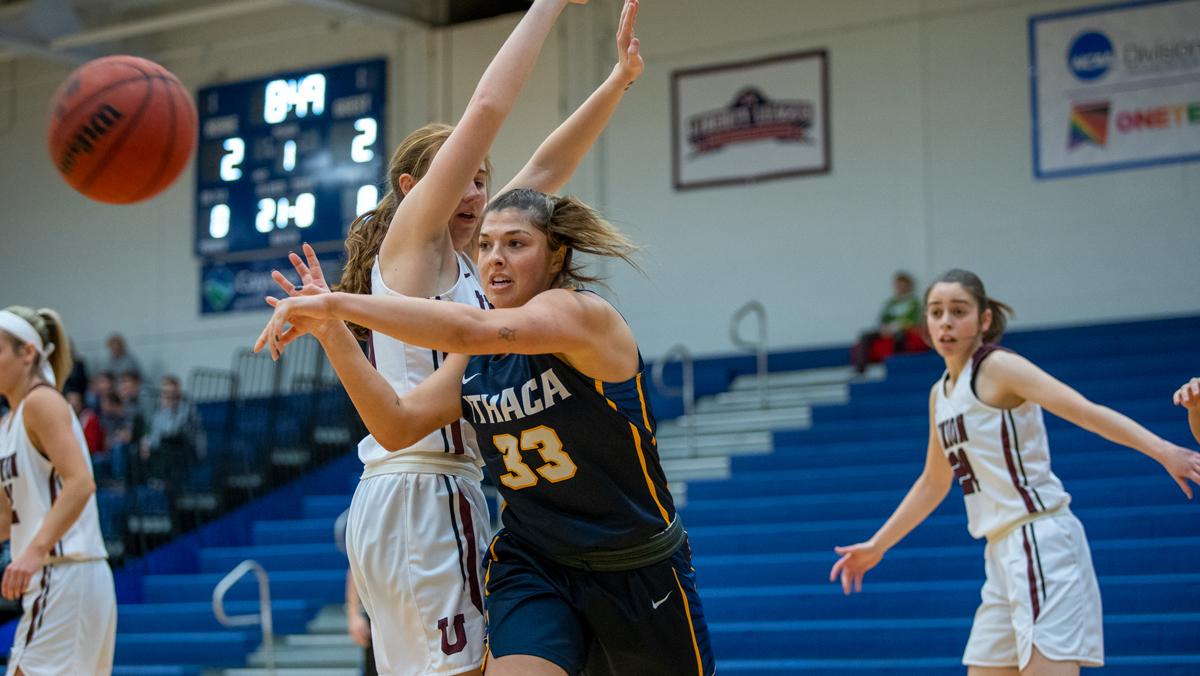 PETER RAIDER/THE ITHACAN
Sophomore Cara Volpe passes the ball to a teammate under the basket during the first quarter of the Bombers' game against Union College Jan. 24 in the Ben Light Gymnasium.
By Emily Adams
Published: February 13, 2020

Dan Raymond, head coach of the Ithaca College women’s basketball team, has a sign hanging on his office door that reads, “Adversity happens to every team. … Your culture will work for you or against you. Create it intentionally!” This season, his team has taken that message to heart.

The women’s basketball team started the 2019–20 season on a three-game losing streak and was defeated by more than 10 points in all three losses. Since the losing streak ended, it has lost only two games and is currently ranked No. 1 in the Liberty League.

This season, the team has only two returning starters and two seniors. Senior Cassidy O’Malley and junior Grace Cannon were significant contributors in 2018–19 and have taken on even more significant roles this year.

“I knew we were losing a lot of talent,” O’Malley said. “It was just getting people ready to step into roles they hadn’t before. I sort of knew it would be more of an adjustment period, and people would have to do things they might not be as comfortable with.”

In 2018–19, the team had one of its best seasons in program history. The Bombers made it to the Elite Eight of the NCAA tournament after winning their first-ever Liberty League title. However, the team graduated five senior leaders, three of whom were regular starters and all of whom played significant minutes in every game.

The squad suffered from that adjustment period during the early weeks of the season, kicking off the year with a 1–3 record. Raymond said the impact of losing last season’s seniors was even more significant than he expected.

“When we started getting into actual competition is when all of us realized that it was going to take some time for the players that were assuming these new roles to adapt and adjust to the expectations that we all have for each other,” he said.

Senior guard Kellyanne O’Reilly, junior guard Megan Yawman and sophomore forward Cara Volpe did not start a single game last season, but they have started every one this year.

O’Reilly has played the second-highest number of minutes on the squad this year behind only O’Malley. Despite being a senior, it is only her second year as a Bomber because she transferred last season from Division I Manhattan College. Raymond said O’Reilly has been crucial to the team this year.

“She’s become a complete player,” Raymond said. “She’s not just a shooter, and I think that’s how people would have described her last year. She transferred in after two years of really not playing, and it took her some time to get her confidence back. It’s been a real pleasure to see that happen for her.”

Volpe said that she felt more prepared to be a starter this year because of the talent on last season’s squad.

“In practice, we had to play against those girls, and they’re good, so just playing against them made me better,” she said. “Then coming to this season, I knew the shoes to fill, and the expectations were so high, so that made me work even harder.”

The team has never had a losing record since Raymond became head coach in 2000. Volpe said the early losing streak motivated the team to turn its season around after returning from Thanksgiving break.

Raymond said he also saw the return from Thanksgiving break as the turning point for the team. The squad dominated Bard College 80–47 in its first game back Dec. 8 and then won its next six games in a row.

Raymond said the coaching staff made several adjustments in training after the break to better prepare the players for in-game situations, especially those who had limited experience at the collegiate level.

“We made things shorter in our practice format, so we did less things, but we did them at a more intense level,” Raymond said. “We put more responsibility on the players to get in the gym and get shots up and took less time in practice to do basic shooting drills and things like that.”

O’Malley said that even though she was feeling the pressure to win during this time, the upperclassmen took on the responsibility of keeping the team motivated and excited despite the early losses.

“We talked about preseason, how much talent, how good we were going to be, and I thought, ‘What if it just doesn’t connect?’” O’Malley said. “I think it was really important to be like, ‘Hey, this is not going to be how the rest of the season goes, and we are going to find a way to fix what’s going wrong.’ I think we really did do that in the end.”

Volpe said the team’s leadership has been spread out more among the entire team this season rather than being concentrated in a small group of seniors. The team does not name captains, a practice that she said allows every member of the team to have their voice heard.

“Everyone has to step up because there’s only two [seniors],” Volpe said. “I think everyone has to play a leadership role. Everyone has to be vocal and talk. I think it’s made everyone closer, and everyone’s comfortable because it’s not just one person running the show.”

The Bombers’ upcoming game against league opponent St. Lawrence University will be one of the most significant of the year for them. St. Lawrence is currently ranked second behind the South Hill squad in the Liberty League and handed the team the loss that broke the seven-game win streak 47–63. O’Malley said the Bombers will be looking for redemption when they face the Saints on Feb. 15 in the Ben Light Gymnasium.

“We shouldn’t have lost that,” Volpe said. “We’re gonna beat them. That’s a really big game, and we’re fired up. Since we left there a couple of weeks ago and lost, we’ve been talking about that game.”