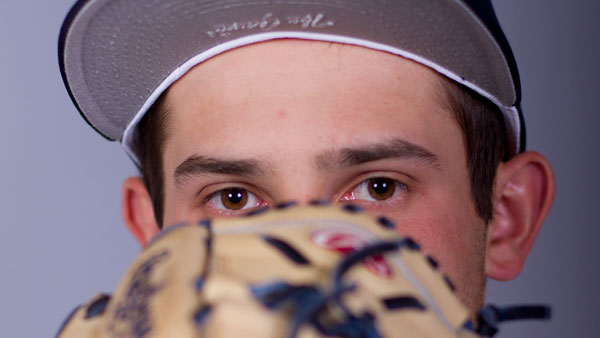 Inside the 6-foot-2 and 150-pound frame of junior closing pitcher Jimmy Wagner is an enormously competitive spirit that has driven his love for winning since he was six years old.

Wagner demonstrated this drive when he capitalized on a last-minute save opportunity against Empire 8 opponent Utica College on April 13. As the baseball team went into the top of the seventh inning in game one of its doubleheader, the Bombers held a comfortable 10–4 lead.

Not expecting to be called into the game, Wagner began light throwing in the bullpen anyway. As his arm continued to loosen, he threw the ball harder, eventually practicing his game pitches.

Between each of his pitches, he eagerly looked over at the field as Utica was putting together a two-out comeback, tacking on four runs in the top of the closing inning against the Blue and Gold. Senior pitcher Chris Anderson came in for relief with the score 10–8, but immediately committed an error which eventually allowed two runners to advance to scoring positions.

Head coach George Valesente had seen enough. Wagner got the nod and cooly approached the mound. Before facing his first batter, his lanky right arm delivered pitches smack into the catcher’s glove with accuracy. When gameplay resumed, he only needed three pitches to strike out Utica’s sophomore third baseman Alex Pexton out looking to end the game.

Wagner clenched his fist in excitement as teammates congratulated him on sealing the deal once again. His performance was no surprise, as Wagner already has four saves and three wins in 12 closing appearances this season.

When former closer senior David Jasukonis was unable to pitch with torn meniscus in his knee late last season, Valesente knew Wagner was the perfect replacement to close.

“I always felt that it was a better spot for him,” Valesente said. “We just didn’t make the move right away, but when David got hurt and because of the fact that [Wagner] couldn’t go much farther than four innings or five innings successfully, it was an easy decision.”

Valesente tested Wagner by putting him in the starting rotation. As a freshman, he showed impressive opening innings, but his lack of stamina caused him to surrender hits and runs later in games. Wagner said he was so intimidated by the starting role that he didn’t want to eat before games.

“Freshman year, I would go out there and I was honestly kind of scared,” he said. “I didn’t want to let everyone down and wasn’t extremely confident.”

Wagner was first introduced to Ithaca College as a senior at Hilton High School, when Valesente scouted him in the Sectional Championship against Victor High School in Rochester, N.Y. Following the game, Valesente encouraged him to apply to the college and invited him to try out for the team in the fall. Once an enrolled freshman at the college, Wagner’s sight was set on making the roster. Valesente told the hopeful prospects they would receive a phone call from him within the next week. A few days later, Wagner and his now-junior teammates received the call.

In Wagner’s sophomore year, the Bombers began the 2013 season with little hype, receiving just six top-25 votes on d3baseball.com. Aside from their 4–4 record during their annual early-season road trip in California, the Blue and Gold were nearly perfect in the regular season and finished 34–6 entering the NCAA tournament. 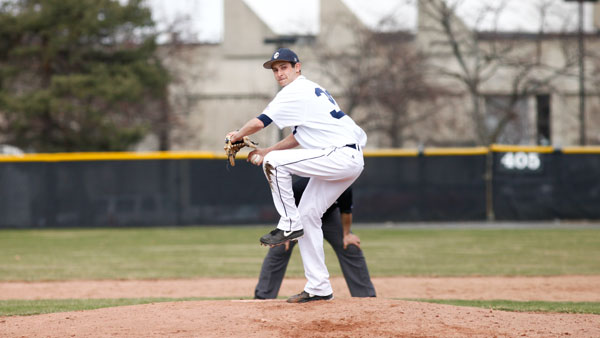 After defeating Moravian College 11–2 in the first round of the tournament, the South Hill squad advanced to play SUNY Farmingdale, where Wagner got his first postseason save opportunity. Using a fastball, curveball and slider to keep batters on their heels, he threw just nine pitches to preserve a 4–1 victory. In the following game, Wagner was called to the mound in the eighth inning with the Bombers leading 3–2. He allowed just one walk and no hits. He went on to record saves against some of the nation’s best teams, including SUNY Cortland, Kean University and No. 1–ranked Linfield College.

Valesente said the key to Wagner’s success has been his consistent composure late in games.

“He seemed to be real excited about it,” Valesente said. “He wanted to pitch in those situations. He certainly has the mentality and he has the stuff for it.”

While Wagner is electrified prior to closing the game, he said he mainly focuses on the mechanics that Valesente helped him with once he comes in.

“I take a few deep breaths and block everything else out of my mind,” he said.

Wagner’s confidence was at an all-time high after shutting down the nation’s best teams in the NCAA tournament. His team looked to him to be the anchor every game.

“There was a lot of weight on my shoulders, but it was awesome,” he said. “I wouldn’t be there unless my teammates put me in that situation.”

“In the regionals, in the World Series, he came in and closed just about every game, so he’s definitely falling into that closer role,” he said. “I think the more experience he gets coming in to shut the door during these games, the better he’s getting.”

The last team standing between the Bombers and the national championship game was the University of Southern Maine. With a 3–3 game heading into the top of the ninth inning, Wagner came in to keep the game tied. After allowing a runner to advance to third on a wild pitch, Wagner gave up an RBI single to put his team behind one run.

The South Hill squad pushed back in the bottom of the ninth when then-junior outfielder Luke Stark hit an RBI single to score catcher Corey Caswell ’13 to send the game into extra innings.

Wagner continued to pitch through extras. Valesente visited him several times on the mound after noticing his clear signs of fatigue, but Wagner was determined to finish. In the top of the 13th inning, he gave up an RBI triple to give the Huskies a 5–4 lead. With that, the Cinderella story was over.

“I kind of felt like I let everyone down,” Wagner said. “If we were gonna lose the game, I wanted to be the guy. I didn’t want to go out with someone else coming in.”

Wagner blew a save opportunity early in this season against Whittier College on March 9 in Whittier, Calif., but the Bomber has shown more calmness and poise. He is experienced, battle-tested against the best teams in the country and said he wants to win more than his opponents.

Wagner pitches while his parents, Bob and Julie Wagner, watch from the stands at every game — no matter the location.

“We’ve always gone to every one of his games and just want him to know that we stand behind him, no matter the outcome,” Bob said.

While Wagner’s competitive spirit hasn’t subsided a bit, he has taken his father’s advice of enjoying the experience outside the result.

“I want him to be as successful as he can be and try not to take everything so seriously, “ Bob said.

Now in the later part of his collegiate career, Wagner feels he is exactly where he needs to be in his role as the team’s closer.

“You have to be ready to go every single game,” he said. “I know what I need to do now to get guys out and be successful. I’m more relaxed now.”