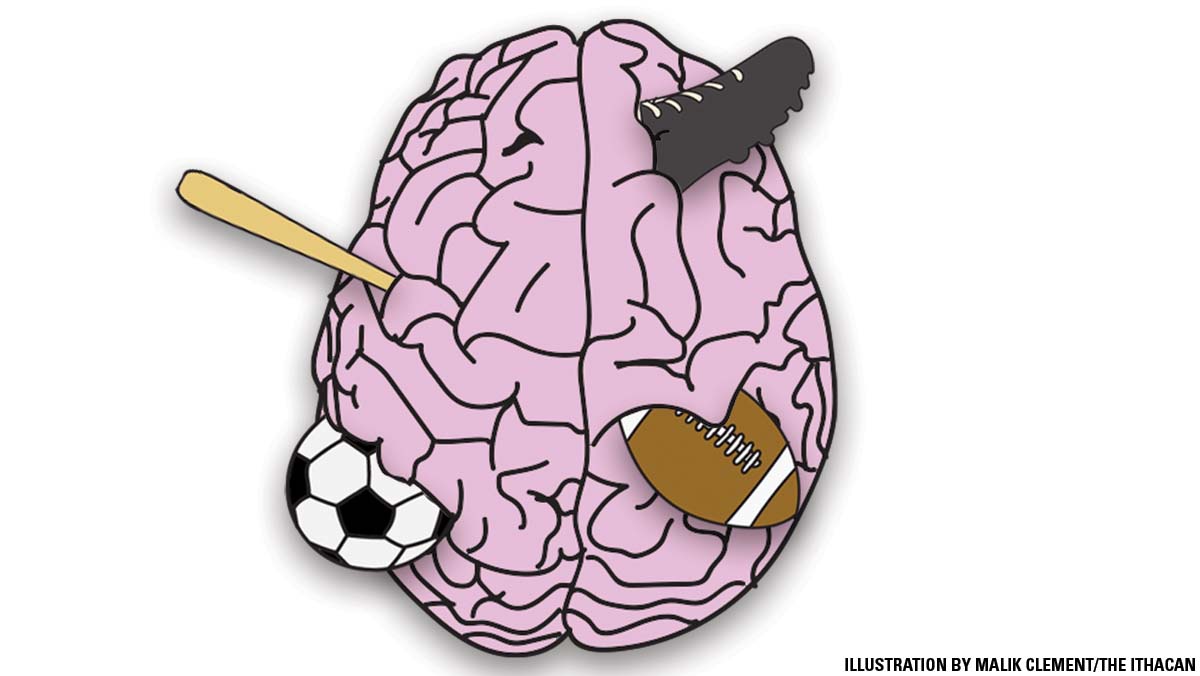 Illustration by Malik Clement/The Ithacan
As studies toward athlete mental health are on the rise, the college works to bring in trained mental performance consultants to support varsity teams.
By Tess Ferguson — Staff Writer
Published: December 6, 2022

The Ithaca College Department of Exercise Science and Athletic Training has provided educational tracks in both the clinical and the practical side of human function since its establishment. In more recent years, however, the program has begun to further explore the root of quality athletic performance: sport psychology.

The program has offered undergraduate and master’s degrees in the field, as well as a minor. Athletic training has been offered at the college since 1975, but the dual degree program for a B.S. and M.S. was first created in Fall 2020. The sport and exercise psychology minor began in 2006. Additionally, the program has worked to connect varsity athletic teams on campus with mental performance consultants.

Mental performance consultants at the college, who are professionally trained in athletic psychology, are largely aiding student-athletes in developing mental, life and self-regulatory skills to optimize performance, enjoyment and personal development in their respective sports.

Tara Stilwell ’18, former athlete on the volleyball team and lecturer in the department of Exercise Science and Athletic Training, said that it was her experiences off the court working with mental performance consultants that inspired her to pursue the same career path.

“While I was an undergrad[uate], the sport [psychology] Master’s were only slowly starting to work with the teams on campus,” Stilwell said via email. “When I played volleyball, we only had a few sessions with Greg Shelley, Ph.D., and I was hooked.”

Shelley, retired associate professor in the Department of Exercise and Sport Sciences, has worked with every varsity team on campus to facilitate workshops and dialogue centered around a range of topics including culture development, team communication and mental toughness. He has served as a mental performance consultant for more than 20 years.

Shelley said a team’s coaching staff will reach out to him for help with anything that falls under the sport psychology umbrella so that he can program group discussions with the athletes to address an issue.

“Rather than a one-time talk, I like to do things in a sequential manner,” Shelley said. “Whether it’s motivation, team building or leadership, it’s important to look at the long-term messages of those conversations. One talk rarely fixes anything, the conversation needs to continue.”

Shelley said that the academy, which focuses on honing character, addresses aspects of sport psychology that might be hard to reach otherwise.

Stilwell said that from the classroom, relaying Shelley’s messages to student-athletes is equally as important as her own curriculum.

“As a professor, former coach and mental performance consultant, it’s very important to me to share resources to inform athletes about the help they can receive on campus, especially in regard to mental health,” Stilwell said.

Senior Jake Lentz, an athlete on the men’s rowing team and a member of the Leadership Academy, said that as a Sport and Exercise Psychology minor, he finds his studies to tie in closely with his day-to-day life.

“I think one of the things that I like most about sport psychology and Leadership [Academy] is that it can really give you some answers,” Lentz said. “The courses I’ve taken and the things I’ve learned through [Shelley] have been really impactful when it comes to my own outlook on sports.”

Having missed the 2021–22 season because of a back injury, Lentz said that taking a Psychology of Injury in Sport and Exercise course played a vital role to keep him involved in the sport.

“It was so helpful to be able to talk about all of the psychological things that happen when you get hurt,” Lentz said. “When you’re an athlete, your sport is such a huge part of your identity. Losing it, even temporarily, can be really difficult to cope with.”

A 2022 study on injured collegiate athletes found that injuries resulting in significant time away from an athlete’s respective sport can cause complex negative impacts on one’s mental health. This may potentially include triggered anxiety, depression, substance misuse and disordered eating. In 2019, The Ithacan reported that 90% of student-athletes have an athletics-related injury at some point in their careers.

Despite the clear progress that the college has made in developing its educational programs and support systems for student-athletes, Lentz and Shelley agreed that there is a long way to go.

“We need practical, hands-on training to make sure that students are prepared to not only apply the research and theory, but to truly understand it,” Shelley said. “We teach the theory really well, but what we’re lacking is the ability to teach our young professionals how to actually do it.”

Lentz said that many of the hurdles that the college faces when it comes to supporting and developing its athletes comes down to the number of resources available.

“Sport [psychology] is obviously not the center of attention at any school right now, and bringing it to the forefront could really open up some doors in the field for more funding and opportunities,” Lentz said.

Tess Ferguson can be reached at tferguson1@ithaca.edu or via Twitter: @tessferg