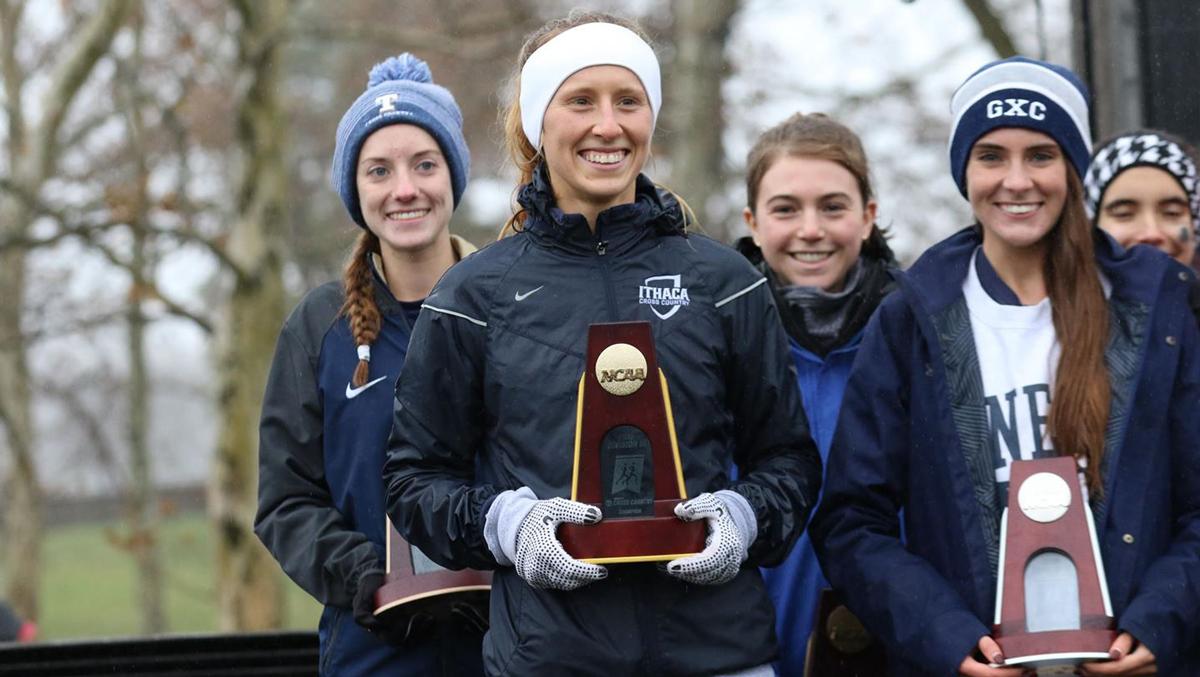 As the 2019 season came to a close for the Ithaca College fall varsity teams, four programs made their way into the Division III NCAA championships. Men’s soccer, women’s volleyball and the men’s and women’s cross–country teams all finished their seasons with impressive national runs.

The men’s soccer team had a record-breaking season. The squad was nationally ranked all season, appearing as high as No. 8 in the country. It made its first NCAA tournament appearance since 2008 and notched the first NCAA victory since 2002.

Head coach Kyle Dezotell said he is incredibly proud of his team for proving that they are able to perform at the highest level in Division III. The team eventually fell to No. 1 Amherst College on Nov. 16 and finished the season with a record of 13-6-2.

“Now that they’ve gotten a taste of what it is like, we hope that they are hungrier than ever to get back to this point consistently,” Dezotell said.

Senior defender Justinian Michaels said that the NCAA ranking the team held throughout the season was a fun title but that its performance on the field rather than on a ranking list was the team’s top priority.

“Something so strong and special about this group of guys was how when we would step on the field or in the weight room, no ranking, no win, no loss, no tie ever mattered to us,” Michaels said. “It was just the main task at hand that was on our minds.”

In 2018, the team awaited an NCAA bid into the tournament, but its name was never called. After missing the opportunity to make an appearance last year, Michaels said, the athletes worked even harder in all aspects of their training to get there this year. Michaels said that historic seasons are now becoming part of the culture for the growing program.

“There is no peak or pinnacle in the eyes of the players or Coach Dezotell,” Michaels said. “There is no such thing as perfection — there is always room to improve and get better no matter what.”

The women’s volleyball team has advanced at least two rounds into the NCAA tournament each season since head coach Johan Dulfer was hired prior to the 2016 season. This fall, the team finished with an overall record of 20–11, a conference record of 6–1, and ended on a 3–2 loss to Clarkson University in the NCAA Sweet 16. Dulfer said that the team played the fifth strongest DIII schedule in the country.

“We want to play the best, and Ithaca belongs among the best,” Dulfer said. “We want to represent the college and get experience against the very best teams in the country.”

Dulfer said that because of the challenging schedule, almost every game that the team played was a battle. After a consistent few years of extremely competitive seasons, Dulfer said, the NCAA tournament is not only the goal of the program but now the expectation.

“It’s really easy to forget how lucky we are or how good we are to get there,” Dulfer said. “It’s a standard that Ithaca has to be pursuing. The bar is high, and it creates expectations, but we never want to get to a point where we take it for granted.”

The men, who were the nationally ranked No. 29 team, earned a fourth-place finish at the NCAA Atlantic Regional meet, which qualified them for the NCAA championship held in Louisville, Kentucky, where they placed 26th.

The team was headlined by a strong group of senior runners. Head coach Jim Nichols said the athletes established at the beginning of the season that their main goal was to qualify for the NCAA championship.

“They’ve been working a long time for this, and things went according to plan,” Nichols said.

The women also had impressive performances on the national stage. Nichols said senior Parley Hannan, who is now a national champion, was a major factor for the motivation and momentum of both teams.

In addition to Hannan’s national title, the women’s team had six other runners who qualified and competed in the NCAA championship race. Head coach Erin Dinan said she could not have asked for a better ending to the season.

“They were hungry for wanting to qualify,” Dinan said. “The team just really pulled together, so to see them get exactly what they wanted is phenomenal.”

Hannan is the first national champion in the history of the women’s cross-country program. She won the individual title in a field of 277 runners by a margin of 18 seconds.

“This is everything I put my heart and soul into,” Hannan said. “It’s a dream, to be quite honest. This just feels like a starting point to it all, which is crazy.”