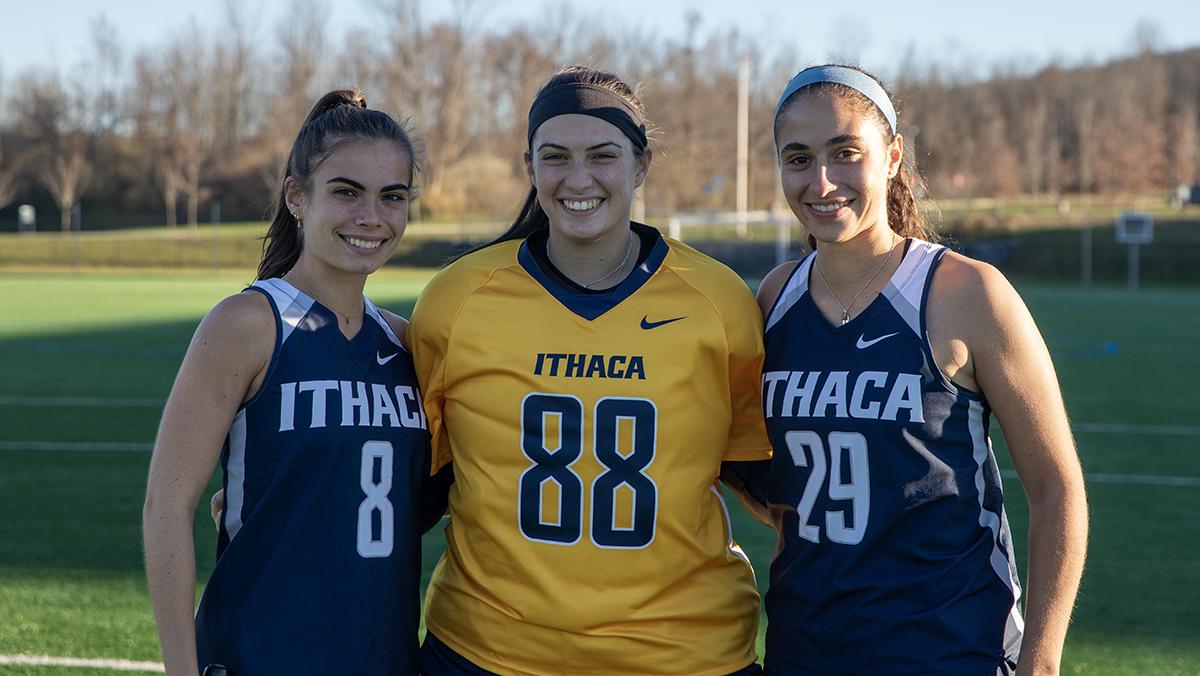 On Oct. 20, graduate student goalkeeper Macy Brandwein was sitting in class when she received an email from the National Field Hockey Coaches Association (NFHCA). The contents included not only a congratulatory note on an impressive season but an invitation to the Victory Sports Tours Division III Senior Game.

Each year, the NFHCA recognizes 60 all-star senior athletes across all six national regions to compete in an event designed to showcase high-level field hockey stemming from all over the country. This year, the highly anticipated senior game, featuring athletes from 47 different institutions, will share the stage with the theatrics of National Championship weekend Nov. 19 at Rowan University in Glassboro, New Jersey.

Brandwein was not the only player to receive the exciting news. Invited alongside her were graduate student midfielder Jacqueline Mirabile and senior midfielder Brianna Lennon, who was selected as an alternate. Brandwein said that when she opened the email, she almost thought that it was fake.

“I really thought that somebody was pranking me,” Brandwein said. “When I checked the [NFHCA] website, it was just so crazy to see my name actually on that list.”

The Bombers are no stranger to the nationwide senior game. In 2021, senior striker Morgan Mullen earned a spot on the team, as did goalkeeper Savanna Lenker ʼ20 in 2019. However, it is the first time since the games were established that the Bombers have had more than one player invited. The college is one of only four institutions with three invited athletes.

Associate head coach Mo Ordnung said that sending three athletes to the game exemplifies how far the program has come since joining the Liberty League in 2017. Prior to Kaitlyn Wahila being hired as head coach of the program in 2017, the team had only recorded five winning seasons since 2000.

The team only rendered one in-conference win upon completing its first season in the league and has since earned playoff berths in the past four consecutive seasons, including an appearance in the conference championship in 2021.

“People are definitely seeing our growth over the past few seasons,” Ordnung said. “We owe so much of that progress to the athletes that are seniors and graduate students now, who have spent four or five years developing our program.”

Mirabile said that the recognition can be attributed to a dedicated coaching staff that has always prioritized their teams’ success.

“I couldn’t have had the career that I’ve had if it weren’t for our coaching staff,” Mirabile said. “Having them to guide me for my whole five years here has been huge.”

Mirabile, who was named a Third-Team All American by the NFHCA in 2021, added that it is exciting to see her coaches being recognized for their dedication and the hard work that they have put into the program for the past six years.

“Our coaches always put everything they have into their job,” Mirabile said. “The fact that three of us are going to this game means that people are really seeing that and talking about it.”

As the teams are not sectioned until the weekend of the matchup, Lennon said that although it would be strange, the chance that she might be playing against her own teammates would be nothing new.

“We compete against each other every single day during practice,” Lennon said. “It’ll definitely be super fun no matter what.”

Lennon added that because the game is taking place during the NCAA Championship weekend, it will be exciting to experience the dynamics between some of the most skilled players in the country.

“Some of these players will have just gone head-to-head in really important games,” Lennon said. “It’ll be really interesting going from opponents to teammates.”

Similarly to Lennon, Brandwein said she is most looking forward to playing with and against some athletes that she otherwise would not have an opportunity to. As the team features athletes from all six national regions, many of these matchups would never occur during a regular season.

“The roster has players from some really great teams that we normally wouldn’t get to play against,” Brandwein said. “I think it’s going to add some super high-level competition that I’m really excited for.”

Ordnung said that in addition to her athletes experiencing a different playing dynamic, it will be interesting for her to witness the game from the stands rather than from her usual spot on the sideline.

“There are so many coaches in the stands and everybody is just so proud to be there and support their seniors,” Ordnung said. “After playing a whole season where every game is a grind to win, it’ll be really nice to just be a proud spectator for a bit and watch the players have some fun.”

Mirabile added that, overall, her invitation to the game is something that she is incredibly grateful for, and it will be the perfect way to tie together her five years with the program.

“I really just want to be able to play and have some fun with my teammates,” Mirabile said. “Being able to wear this jersey and represent this school is more than I could’ve asked for to finish my career.”