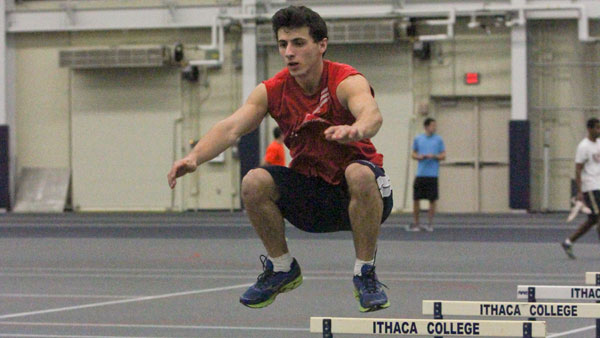 Sophomore Ndue Palushi has made big transitions in the past, and this season he is preparing to make another one by taking on one of the biggest challenges in track and field: the heptathlon.

Palushi moved with his family in 2001 to the United States from Kosovo, a country south of Serbia in the Balkan region. The country did not gain its independence from Serbia until 2008, resulting in a period of unrest for about 20 years.

Palushi said his move from Kosovo is his primary inspiration for competing in the heptathlon because of increasing possibilities he has been offered in the U.S.

“My main source of motivation is that I was given this opportunity,” he said. “I came from another country where I didn’t have any of this stuff, so I want to utilize all of the resources I have, and this is an opportunity I know I would not have in Kosovo.”

Palushi grew up in Pine Plains, N.Y., where he participated in both track and field and cross-country from seventh grade through his senior year at Stissing Mountain High School.

When he came to Ithaca College, Palushi said, he was convinced to join the cross-country squad by former teammate Tyler Murray ’13. At the end of his first season, however, Palushi decided he did not enjoy it and instead became interested in the multi-event competition for track and field.

“It wasn’t for me, and the races were too long, so I asked my coach if I could do multis because it was something I always wanted to try,” Palushi said. “He was willing to let me, and it is a really big time commitment, but I am really happy I made the decision.”

Palushi has been working to handle the three-hour practices, which are a large obstacle of the sport. He balances training and school work as a business major and a junior analyst for both the business school’s Core Trading Consultants and the campus organization Student Consulting for Nonprofit Organizations.

Sophomore Larkin Bohanan said while Palushi does not have much free time with all of his commitments, he is still fitting in the time to do what he loves.

“He works out every day in between classes, and he has even been training a lot later lately, but he is really enjoying it,” Bohanan said.

Moving from just middle- and long-distance running events to a combination of seven events will take Palushi time to adjust. But with the help of his past cross-country training, Palushi said another challenge he must overcome is the mental hurdles.

“My struggle has been mentally, with events like pole vault and shot put,” Palushi said. “I do not have any experience with [these events], but I am making good progress and getting better.”

While the aches and busy schedule have posed some difficulties for the former cross-country runner, Palushi said he enjoys bonding with other members of the team.

Freshman Tyler Denn-Thiele is one of the athletes who will also be joining Palushi in converting to a heptathlete for the winter season. Thiele, who has a strong background in pole vaulting, said the duo has the ability to push each other in all the events.

“In events where we both have no idea what we are doing, like shot put, we are definitely working together and helping each other out with things that we notice,” Thiele said. “His strengths complement my strengths and vice versa, so we are trying to work as a team.”

With the track and field season beginning Dec. 7, Palushi said he will probably not participate in the heptathlon at the opening meet, the Cornell Relays at Cornell University. He said he wants to prepare for live competition in only two, three or four heptathlon events before jumping into all seven in one weekend.

Palushi said despite being new to some of the events that come with the heptathlon, he is looking forward to scoring points for the team the same way former multi-athletes Rad Arrindell ’13 and Alec Svoboda ’13 have in the past.

“I am really excited to try it for the first time with all the work I put in,” he said. “I am not going to do it halfway, and I am going to do everything I have to to get to the point I want to be to help the team.”