Hanging it up: Former student-athletes share their past athletic experiences 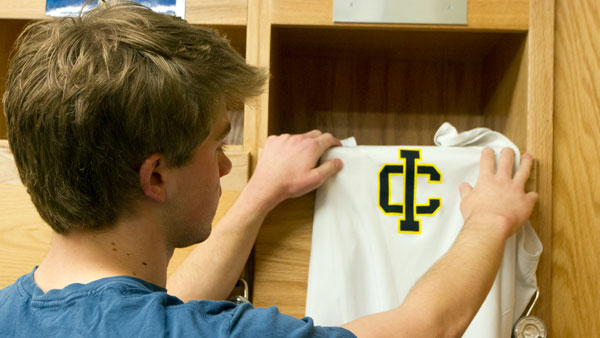 Every athletic career inevitably comes to an end. Whether it is willingly or unwillingly, each athlete eventually leaves his or her sport. Some retire after years of playing professionally while others withdraw upon graduation. Some find themselves leaving their sport because of injury or because they have a desire to pursue other activities.

Ithaca College’s Class of 2014 maintains just a 46 percent retention rate for four-year athletes. When this year’s senior class entered as freshmen in 2010, it contained 247 athletes split among the college’s 27 varsity sports. According to the college’s athletics website, only 115 are still on varsity rosters as seniors.

However, this is an increase from the Class of 2004, which entered the college in 2000 with 226 freshman student-athletes. According to the college’s athletics website, only 96 student-athletes remained on their respective varsity teams for all four years between 2000–04.

“There’s a natural turnover where people don’t have the same amount of passion for their sport,” she said. “Once they’re comfortable in college, maybe they don’t need their sport anymore. Injuries happen too, or if someone is not getting playing time or not happy with their sport, there is some turnover there too. I think those are the top reasons that athletes stop playing sports.”

Some, such as junior runner Jason Klem, know it’s time to leave their team when their sport becomes more taxing than rewarding.

Klem joined the men’s track and field team during his freshman year in 2011, but he said he felt his passion for running diminish as his commitment to track continued to increase.

“Track was my life six days a week,” he said. “I noticed I was putting the minimal amount of focus towards it.”

Klem said it was difficult to balance his time and energy between school, friends and track. After this realization, Klem decided during the summer not to return to the team as a sophomore. He said his decision paid off, as he was then able to participate in several extracurricular activities, including Take Back the Tap, the International Business Association and Bomber Bike Initiatives, which would not have been possible with the demanding time commitment of varsity track.

Klem is not the only former Bomber who has become more involved on campus after leaving their sport. Junior Sam Waters wrestled for two years on the varsity team, but after sustaining four concussions in high school and a broken finger that required surgery, he left the team. The concussions alone made it dangerous for Waters to wrestle, but he said the surgery and its long recovery time were main factors in his decision to quit. He said he talked to head coach Marty Nichols, and they mutually agreed that he could not come back strong enough from his injury to compete at such a high level.

Free from his commitment to wrestling, Waters was able to fulfill his passion for event management with the Office of the Campus Center and Events Services and make some money in the process.

“If I had committed myself to clubs from the beginning instead of a sport, my time would have been spent so much differently,” Waters said. “It would be easier for me to get jobs and internship offers. I feel like I missed out on so much club time.”

Waters said the two years he spent on the wrestling team set him back because he was not able to fully take advantage of other extracurricular activities.

For both Waters and Klem, making the decision to quit was extremely difficult, especially because they both said they were close friends with their teammates. Klem said it took him the full track season to realize he didn’t want to compete as a sophomore.

“There wasn’t really one specific moment where I realized that track was not what I wanted it to be,” Klem said. “It was a tough decision, but it almost wasn’t a decision. It just sort of happened. I love running, but the competition stressed me out more than it gave me enjoyment.”

For some of these athletes, leaving their sport was not by choice. As a freshman, now-junior Mary DiLazzaro was the backup goalkeeper for the 2011 women’s soccer team that advanced to the Final Four, but did not make the team as a sophomore.

DiLazzaro said though she was upset about not making the team at first, she recovered and, like Waters and Klem, saw an opportunity to take advantage of other activities because she had more free time. She became involved with the college’s Catholic community and the Culinary Club, of which she is currently treasurer.

She said she welcomed the break from the sport that had been such a big part of her life for eight years. DiLazzaro also said she felt her skill was at a lower level than many of her teammates.

“I think being cut was kind of [a blessing in disguise],” she said. “I had been playing soccer year-round since I was about 11. By the time I was 19, I think I was ready to step back from it.”

Sharing a similar feeling with DiLazzaro, Waters said he also found it difficult to keep up with his teammates as a walk-on. The men’s wrestling team has a long history of success, which includes three NCAA team championships and 11 individual national champions. Waters said though he was able to learn from his nationally ranked teammates, he also felt the pressure competitively, especially when he was trying to return from his injury.

“For someone like me who belongs in Division III, it was ridiculously hard competing with guys who could be Division I athletes,” he said. “It’s such a competition-based scenario. My coach told me that it wasn’t going to be a welcoming environment for someone who is trying to come back from an injury because there’s so much competition with the new freshmen coming in.”

Whether it is working in event management, joining clubs or increasing religious participation, each athlete has found his or her niche outside varsity sports on campus.

Though he has not ran at the varsity level in two years, Klem said he still runs as much as he can. He is training for the Steel Rail Half Marathon on May 18 in Adams, Mass., and said his training fosters his competitive mentality.

“I’m a very competitive person,” he said. “I knew I was going to be running my whole life, and would be running whether I was competing in track or not.”

DiLazzaro said she still plays pickup soccer for fun whenever she can but is enjoying not playing competitively.

“I got over [not making the team] because life goes on,” she said. “My freshman year was awesome. You can’t replace that experience of going to the Final Four. Not making the team my sophomore year, I kind of felt like that was as far as I could go with the sport anyways.”

For Waters, the lessons, such as endurance and teamwork, that he learned through college wrestling were valuable, but he said the experiences he has had since he stopped wrestling have proven even more worthwhile.

“Wrestling was my family, and it was scary leaving the family behind,” he said. “People say you gather so much discipline and heart with sports, but I think you gather so much more experience and intelligence when you go to clubs and work at a job. I wish I had realized the extracurricular scene earlier.”