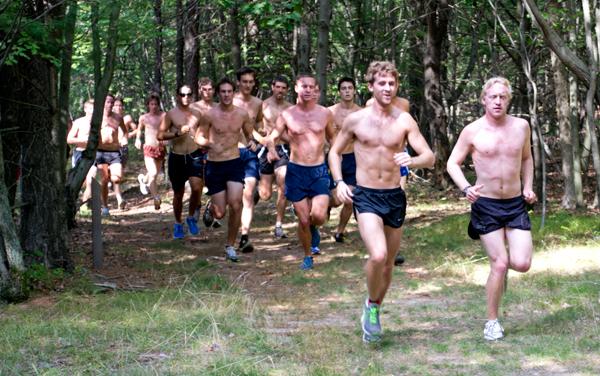 Solid senior leadership and experience will be essential as the men’s cross country team looks to continue its Empire 8 Conference and regional success from 2011.Last year, the team took home its second title in a row at the Empire 8 Championships in Saratoga Springs, N.Y. The team also posted a 10th-place overall finish at the NCAA Atlantic Region Championship at St. Lawrence University in Canton, N.Y.

Six of the Bombers’ top seven runners will be returning this season with experience from the regional championship squad. Head Coach Jim Nichols said this championship know-how will set this season apart from previous years.

“Leadership will be the most important factor in our success this season,” Nichols said. “All of the seniors will be involved in this.”

Captain David Geary will spearhead this effort, but not without help from the other five seniors. Geary, Nathan Bickell, Chris Lotsbom, Billy Savage, Mark Vorensky and fifth-year senior Tyler Murray will all set the tone for the team’s success.

“Last year, Dan Craighead was instrumental in leading the team,” Lotsbom said. “This year, David Geary is ready to fill the void lost, and all of the seniors are right there behind him, ready to provide a helping hand wherever needed. He is a great motivator and leader; that should help us accomplish our goals.”

Vorensky said the Bombers’ greatest strength lies in how little dropoff there is between the front and back of its rotation.

“Two years ago we had a really deep team, and I think we have that same amount of depth this season,” Vorensky said.  “You want your teammates to do well, and you want a competitive team within the team.”

While the South Hill squad has the talent and drive it needs for a successful season, Lotsbom said the team is still looking to improve upon how it runs as a unit.

“Pack running will be a focus for the team this year,” Lotsbom said. “Last year we had a big time gap from our first to seventh runner. If we can shorten that, run and finish together, we can beat some of the teams we lost to last year.”

The University of Rochester, Rensselaer Polytechnic Institute and St. Lawrence will prove to be the strongest competition for the team. St. Lawrence placed first at the regional championships in 2011 and will be a tough test for the Bombers this season.

The experienced group of core of runners will mesh well with the pack-running mentality, but Vorensky said keeping an eye on the end goal needs to be a focus as well.

“In the runner’s season we start training in late May, and our big meets aren’t until November, so it’s hard to stay focused all those months,” Vorensky said. “The big thing that’s going to help us succeed is staying focused on what really matters, and that’s the meets at the end of the season that are going to help us qualify for the national meet.”