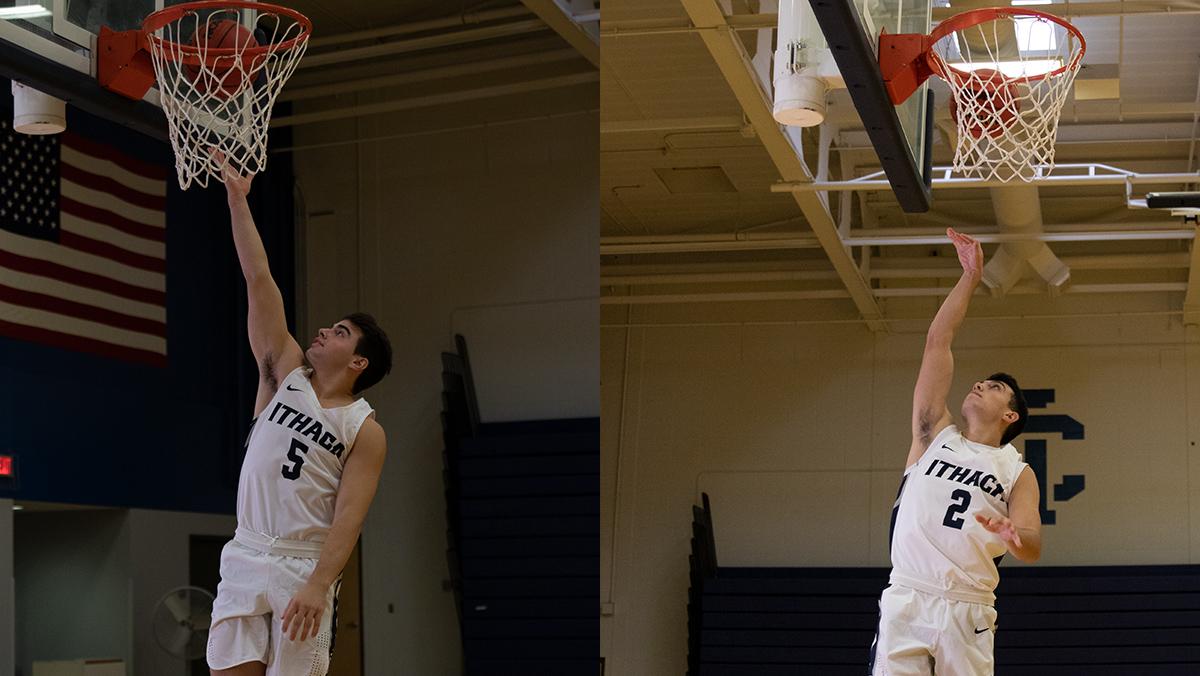 Led by a new coaching staff, the Ithaca College men’s basketball team will look to continue its winning ways in the team’s return to the court after two years.

The Bombers won their first Liberty League title in program history the last time they took to the court. However, much has changed since the 2020–21 season was canceled due to the COVID-19 pandemic. New head coach Waleed Farid was hired May 24, 2021 after former head coach Sean Burton ’09 resigned April 26. He arrived in Ithaca after spending the last five years as the head coach at Hartwick College in Oneonta, New York, as well as previous coaching experience at Stevens Institute of Technology in Hoboken, New Jersey.

Farid is not alone in being new to South Hill. New assistant coach Conor Dow joins the Bombers’ coaching staff from the Saskatchewan Rattlers of the Canadian Elite Basketball League. The new coaching duo will take over a team that has increased its league winning percentage with every year the program has been in the Liberty League. The Bombers averaged 84.7 points per game, while holding opponents to 71.7 points per game during the 2019–20 season.

Farid said the team is adjusting well to the new coaching staff, but acknowledges that there are bumps in the road that comes with the territory.

“We’ve got a really smart group of players on our team, so it’s been easy to kinda teach them stuff and watch it develop,” Farid said. “It hasn’t been that tough, but there’s the occasional bump in the road or whatever that we have to spend some extra time reviewing things.”

Farid said he anticipates the Liberty League being a tough conference this year, and he believes every team is capable of defeating each other.

“To be honest, I think our league is really good,” Farid said. “I think from top to bottom, every team in our league can beat any team in our league. I expect a lot of the teams to feel like they can contend for the league title … Hobart and [Rensselaer Polytechnic Institute], I expect those teams to be really good, but teams like Union, Skidmore, Clarkson, St. Lawrence, Vassar, all those teams I think are gonna be just as good and ready to battle on a day-in day-out basis.”

Farid mentioned multiple players who have stepped up early on in the preparation for the season. One of those players is Skylar Sinon, senior guard and one of the four team captains.

Named to the Liberty League Second-Team, Sinon played in all 29 of the Bombers’ games in the 2019–20 season, including starting in 28 of 29. He averaged 16.3 points per game for the season and led the team in assists with an average of 4.1 per game. Sinon also competed with Team USA’s Division II men’s team in Brazil this past summer. After playing during the offseason against international competition, Sinon said he’s ready to show how he has developed since his sophomore season and knows his teammates are prepared too.

“We play with heart,” Sinon said. “I know that every player on our team knows what we’re about, and we try to bring it everyday in practice, so that this way we get to the game and there’s no surprises for anyone.”

Sinon said he also believes the Bombers will have a little extra motivation after not being able to play last season.

“Being able to play is all the motivation that we need,” Sinon said. “I think I mean finally being able to breathe on a basketball court is something I used to take for granted, but I mean we are all just excited to get on the court and have our fans in the school, and our parents all supporting us. We’re excited, we can’t wait.”

Senior guard George Sikoryak III is another player who has stepped up as a leader in the early going, Farid said. Sikoryak said this is exactly the type of role he anticipated having coming into the year.

“The main thing is, [I] just want to be a leader, just be the best teammate I can,” Sikoryak said. “Whatever the team needs from me, is what my personal goal is.”

Sikoryak played in all 29 games for the Bombers in the 2019–20 season. He was named to the Liberty League All-Academic team as he shot 56.8% from the field.

In addition to being a leader for the Bombers, Sikoryak said he worked on all aspects of his game during this offseason.

“I think my shooting has improved, I’ve been putting a lot of work into my shooting,” Sikoryak said. “Just keeping on top of the same stuff, ball handling … I love playing defense, so I try to keep constant progress on that.”

Sikoryak also acknowledged that while the team has big goals, everyone will have to constantly improve every day if they want to accomplish their goals.

“Obviously, we want to go far, we want to win the league, we want to make it in the tournament, but that’s all going to come,” Sikoryak said. “The main thing is just getting better each day, day by day, continuously working.”

The Bombers begin their push for back-to-back Liberty League Championships against Alfred University on Nov. 12 in Alfred, New York.