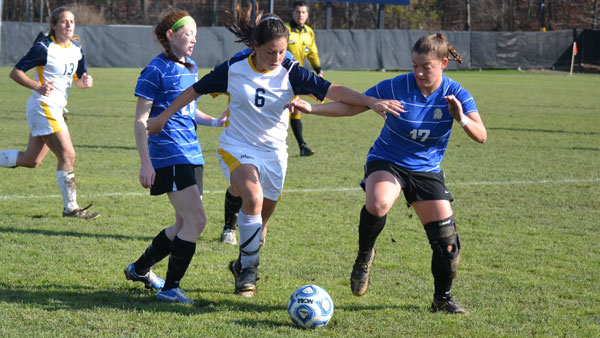 Of the six seniors that graduated in 2013 from the women’s soccer team, four were named to an Empire 8 all-conference team. Two were selected as First Team All-Americans, and one was named to an All-American team in each of her four years as a Bomber.

The defending Empire 8 champions have some big shoes to fill. Without the strength of last year’s graduating class, the team will need to find new ways to win, senior forward Jackie Rodabaugh said.

“Last year’s class was pretty special,” Rodabaugh said. “There are many roles that may not necessarily be replaced in the exact way, but if each girl steps up their game and can have the confidence, we’ll continue to be successful without the big names of last year’s senior class.”

Also in contention for playing time at forward are sophomores Libby McNamara and Angelica Romeu, as well as junior forward and midfielder Sam Thompson. Of the three, Romeu played the most last year, appearing in 15 games and netting one goal. McNamara played in 10 games but scored twice.

The team will need help from the incoming freshmen class as well as a few returners who have not seen much time on the pitch in past seasons, senior midfielder Amanda Callanan said.

“We will work hard in trying to make the incoming freshmen comfortable as quickly as possible in order to focus on our goals,” Callanan said. “It will be very important to get [the new players] ready to compete at the next level. If we can do this, we will find success.”

Senior Julie Winn led the midfield last year with four goals and 12 assists for the season. Along with the returning seniors Callanan and Ellyn Grant-Keane, sophomore Kelsey King will be one of the most important factors in replacing Winn at midfield. King played in every game for the Bombers last season and led last year’s freshmen class with five goals.

Arguably the most critical component for the Bombers though will be their defense. The Blue and Gold ranked 3rd among DIII teams in the nation last season with a .336 goals-against average but graduated several impactful defensive players. Head coach Mindy Quigg stressed the importance of defensive cohesiveness.

“We will be strong as a defensive unit [this year],” Quigg said. “We take great pride in our team defense.”

On the defensive end, the Bombers graduated Becca Salant, who was named Goalkeeper of the Year by D3soccer.com with a .914 save percentage. Senior Becca Lewis and sophomore Beth Coppolecchia will compete for the starting goalkeeper position this year.

After an early Sweet Sixteen exit from the NCAA tournament last season, Rodabaugh said the team’s goal is to capture the National Championship title that has eluded it for the past two years. In 2011, the Bombers made it to the Final Four before losing to Wheaton College, which eliminated them from the tournament. Last year, they were upset by Misericordia University in the third round of the tournament.

Rodabaugh said if the team can have another season with an offense that averages 2.6 goals per game and a top five–ranked defense, it will be in a position for championship contention.

“Being eliminated from the tournament the way we did overshadows a lot of the great things we did accomplish last season,” Rodabaugh said. “Another trip to [the Final Four] would mean the world to us.”