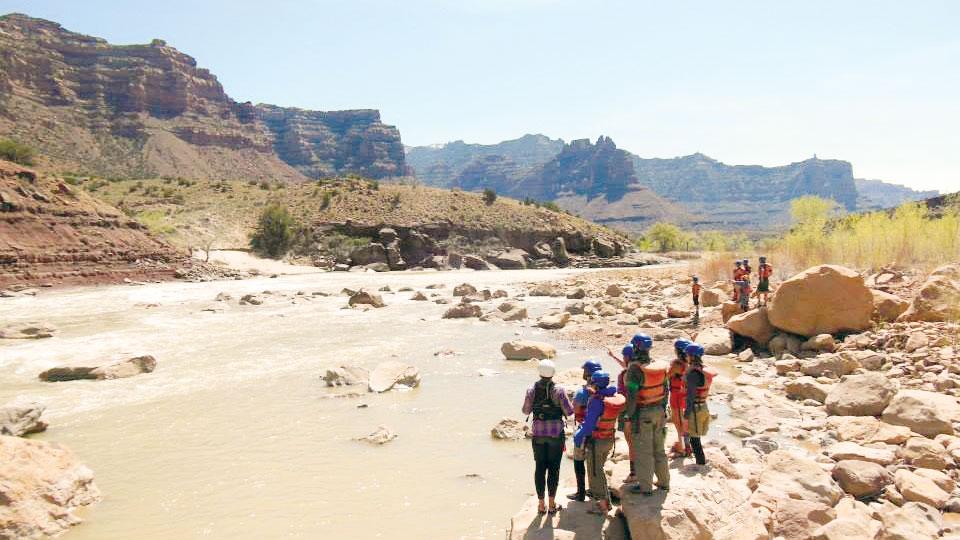 Courtesy of the Department of Recreation and Leisure Studies
Students from the outdoor immersion program visited Colorado, California and Utah as part of their 90-day journey.
By Steve Derderian — Senior Writer
Published: October 8, 2014

Malcolm Wilber, a junior outdoor adventure leadership major, has never been shy about taking a risk or going on an adventure.

But looking at a before-after picture of him from the Spring 2014 semester, he now has even more of an appearance of as an outdoorsman. Wilber, who grew up in Great Barrington, Massachusetts, in the middle of the Berkshire Mountains, went from having short-cut blond hair to blond locks that extend under his hat and touch his shoulders.

In Fall 2013, Wilber was offered an opportunity to take part in Ithaca College’s Spring 2014 outdoor immersion program, a 90-day adventure traveling through the mountains of Colorado, rock climbing in California and canyoneering and kayaking in Utah, and said he was sold on the idea.

“Out of high school I kind of knew this is what I was going to do,” Wilber said. “Most of us are from the East Coast and have spent most of our time growing up here. The West Coast is the mecca and the center for this industry, and it’s where a lot end up going out to work and where a lot of the opportunities are.”

The immersion program was associated with the program Outward Bound, a program that involves a series of independent schools from states including Colorado, Washington and Oregon. Outward Bound teaches students survival and emergency response skills in vast regions of the country.

Patrick Lewis, assistant professor in the Department of Recreation and Leisure Studies and the college’s two-year leader for the expedition, said the partnership with Outward Bound allows him to have a greater sense of collaboration with more professional staff who have ventured in these regions previously.

“When we started collaborating with Outward Bound, it had a lot to do with having access to more field staff,” Lewis said. “We are able to basically have students that don’t have prior experience in the outdoors come out and do the semester successfully.”

Wilber’s journey with 11 other outdoor leadership students began in early February in the mountains of Leadville, Colorado, at an altitude of about 10,000 feet. The trip began with a skiing expedition through the mountain passes. Wilber said the group reached a maximum height of 13,000 feet on the trip and spent most of that time working on navigating and adjusting to the cold conditions.

“Everybody reacts differently when you reach that sort of elevation,” he said. “You burn almost 4,000 calories from hiking, so your food intake becomes very important. Some of us would even put sticks of butter in their hot chocolate to get the extra calories.”

Lewis said the group often had to make adjustments to shift their itinerary because of potential hazards from skiing in high altitude and snowy conditions.

“We went to a different area that had more stable snow conditions and would not have put us in a situation with high actual risk,” Lewis said. “That choice was a good choice because during the time that we would’ve been on the previous itinerary, that area had an avalanche. We managed that risk properly and removed the high risk.”

In terms of evaluation, the group spent nine days in February researching wilderness first-responder medicine and creating scenarios of how to lead an emergency response team. Whitney Pander, another junior who participated in the spring immersion program, said classes would last from about 8 a.m. to 5 p.m. and were split into classroom sessions in addition to responder scenarios.

“We were learning through doing, which is what we all excel at because that’s sort of what outdoor education is all based around,” Pander said. “I actually really enjoy learning about the medical stuff — I have a strong medical history in my family background, so it felt fun to study for it and take these scenarios seriously.”

Phase two of the journey shifted to Joshua Tree, California, where the group spent about two weeks with rock climbing in national parks. Pander said this part of the trip allowed the group to enjoy some warmer weather and a different style of physical activities.

“That transition was right where it needed to be,” she said. “Being in Joshua Tree was like its own planet. It was just a huge playground when you think of it in the climbing aspect or even just a scrambling or a hiking aspect.”

The 12 students were divided into groups of different sizes and split their time climbing the rocks and learning how they would operate their own climbing utilities. Wilber said the biggest challenge was executing multi-pitch climbing, which involved ascending the peaks that are higher than a single belay rope of about 80 feet.

Though every member of the expedition had different experiences, Wilber said everybody involved was relatively new to actual rock climbing.

“It’s a whole different experience than just using a traditional climbing wall because you really get to feel the rock, and there’s a greater rush when you reach the top.”

Senior Jake Reiley, another member of the expedition, agreed with Pander that this phase was the most reflective part of the journey.

“Joshua Tree is sort of the heart of climbing in a way,” Reiley said. “At one point we were all lying on top of a rock looking at the stars above Joshua Tree. We were having a little lesson on the different constellations and galaxies, and it was amazing to just lie there and stare off at the desert night sky.”

The second half of the trip involved a combination of canyoneering and whitewater rafting, with the group’s home base located in Moab, Utah, a city in eastern Utah on the banks of the Colorado River.

The group began by backpacking and hauling baggage through tight-slot canyons before heading north to Vernal, Utah, where the group embarked on a three-week, 250-mile expedition down the Green River and Colorado River to Cataract Canyon in Canyonlands National Park.

Lewis said this portion of the 90-day immersion contained perhaps the most risky activities. While whitewater rafting in the Colorado River, the group was told that the water levels were increased to create a pulse flow and increase the water flow through Arizona and California into Mexico. Therefore, the group often faced Class II and Class III rapids, which are considered novice and intermediate rapids, respectively, according to the International Scale of River Difficulty.

On this journey, Wilber said he came across some Class IV rapids, which are considered advanced, and were the highest the group had faced. When he approached the rapid, he said the nose of the boat went sideways and ejected him off his boat. In order to regroup, he had to regroup and kick back to his boat, where he was pulled in by one of his fellow partners.

“We had gone over so much safety during the semester that I knew what to do,” he said.

Lewis said this shift in water was expected and that part of the learning experience was the risk involved.

“When the water goes up on a river, you can’t stop water, you can’t push the stop button,” he said. “Anytime you’re on white water in a moving river, there’s always a heightened risk just because there’s a lot of moving factors where you can’t say stop.”

As the semester culminated, and the group returned from the wilderness, there was a period of adjustment. Though this transition period was different for everybody, Reiley said it took him about two weeks to adapt to having a regular routine.

“It was very strange to see so many people that I didn’t know after spending so much time with people I knew really well,” Reiley said. “I think that experience happens to everybody, like personally even if I go on a five-day trip it takes me a little while to readjust to being out of the woods.”

Lewis said he wants to continue expanding the program to suit more people who may not be in the major. He also said he plans to add Oregon to the immersion program for the upcoming spring semester.

Now that Wilber is back in Ithaca for his junior year, he said he will use his experience from the immersion program and begin sharing his rafting skills with other students through a kayaking workshop he is putting together for one of his classes.

“The best part about the experience is that I will have these memories, skills and connections that I’ll have for the rest of my life,” he said. “The outdoor industry is exploding right now. People want to be outside, and there’s a need for people to help teach and train others.”