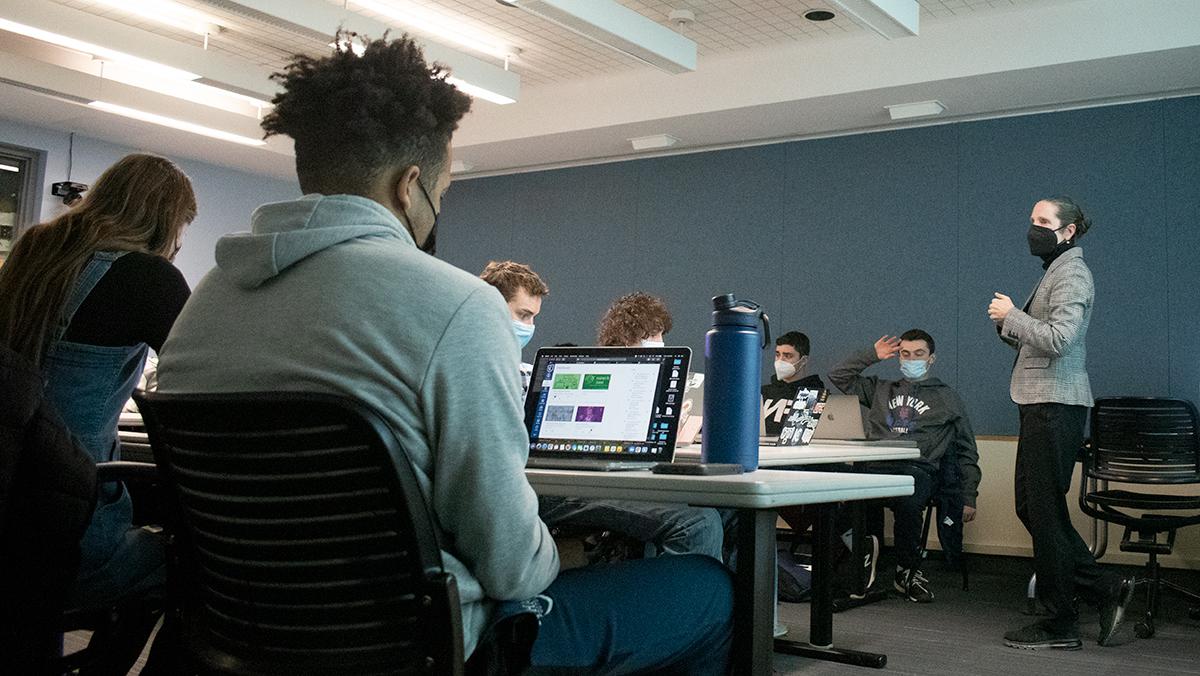 As the country continues to learn about the NCAA’s new Name, Image and Likeness (NIL) policy, Roy H. Park School of Communications is offering a special topics class titled Personal Branding for College Athletes during Spring 2022.

On June 30, 2021, the NCAA approved a new interim policy that would allow college athletes to profit from sponsorships and endorsements. After the policy was passed, Ellen Staurowsky, professor in the Department of Media Arts, Sciences and Studies at Ithaca College, knew this was a topic she wanted to have available for sports media majors to expand their knowledge on. Staurowsky said she reached out to Jack Powers, interim dean in the School of Communications, to express an interest in starting this course.

“It was a long time coming,” Staurowsky said. “The NCAA interim policy is really a reflection of failed leadership. All of this is restoring the rights athletes should have had throughout the 20th century that was taken away from them through NCAA regulations.”

Classes like this are becoming common in institutions across the country, but especially in Division I schools. Out of 65 Power Five universities, which consists of the SEC, Big 10, Big 12, PAC 12 and ACC, 53 of them are offering an NIL related class, according to Sports Illustrated. More locally, Syracuse University is offering an NIL class.

What also drove Staurowsky to teach this class was the interest from students. One of those students was junior Peter Raider, manager of the Bomber Sports Creative Media Team. Raider said he was interested in the course because content creation plays a large role in personal branding, so it could help him bring NIL deals to the college and get a better understanding of a key topic in the field he wants to work in.

“It provides such a unique opportunity for sport media majors and athletes to get a better understanding of how to build their personal brand and to learn how to build others’ brands,” Raider said via email. “It’s been a lot of fun to learn from [Staurowsky] and the guest speakers she’s brought in.”

While the class is limited to only those pursuing a major in sports media, it can be helpful for student-athletes at the college. Senior Brady Lynch, women’s basketball player and former women’s soccer player, said she was particularly interested in this course as a student-athlete.

“Between soccer and basketball, we never had any type of talk of how to be able to promote your own image and name,” Lynch said. “When I saw we were going to have a course about that and Dr. Staurowsky was teaching it, I knew it was something I wanted to take.”

Staurowsky said the course is divided into two key areas of focus. The first half of the semester is set on trying to better understand exactly what this new NIL policy means in the world of college athletics. Staurowsky organized Zoom calls with professionals from the field to speak to the class, including Jason Greco ’08, associate athletic director for compliance at Auburn University, to discuss the new policy for major Division I schools. Staurowsky said she was glad to provide the opportunity for students to engage with someone with firsthand knowledge of the course’s subject matter.

“To be able to have a conversation with someone in a school who is dealing with this in one of the biggest football power schools in the country and to gain insight into what their issues are and how they’re handling things, how the SEC [Southeastern Conference] [is] handling it, how the state is handling it — it is just fantastic,” Staurowsky said.

The second half of the semester is more focused on the branding aspect for athletes to capitalize on the NIL rules. Staurowsky said it will examine how Ithaca College student-athletes might be able to earn deals and the future of NIL at the Division III level.

“The two big things we will be tackling are, number one, can we come up with an educational unit for our athletes here at Ithaca College?” Staurowsky said. “What would we include as being important for our athletes here? Number two, addressing this issue as a Division III school, are we really out of the conversation as an NIL school?”

Junior Julien Deumaga, wide receiver for the football team, said he hopes to learn more about enhancing his brand by taking this course and pass what he learns in this course onto another person who can take it and enhance their own brand.

“If I ever did have a chance to further brand myself, I definitely feel I will be more prepared after taking this class,” Deumaga said. “Learning about it has been very cool. So if the opportunity ever arises, then we will see where it takes me.”

For Staurowsky, when the semester is over, she said she hopes the students in the section understand the moment’s significance.

“I hope they gain a much richer understanding of the historical moment like this,” Staurowsky said. “I hope our students can go into an industry and not do business as usual, but that they are empowered to see how they create change in a way that creates win-win scenarios and make systems better for everybody involved.”

Commentary: College sport amateurism is a tool of oppression