Quarterback Wolfgang Shafer leads the pack on and off the field 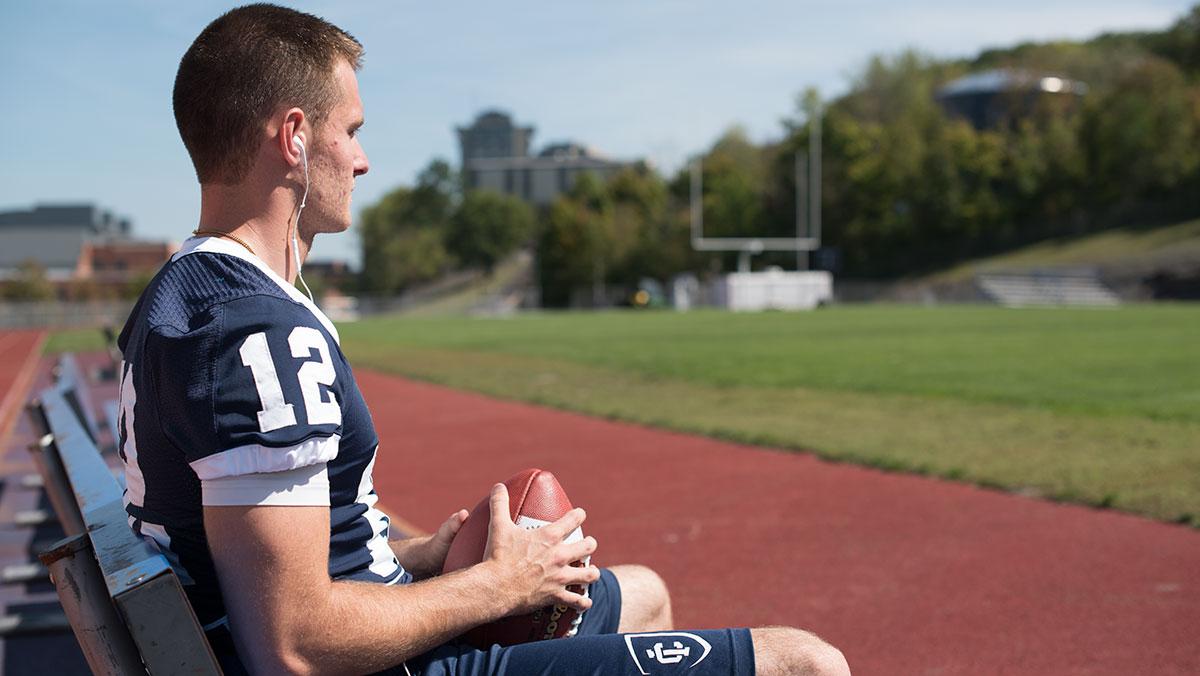 Amanda den Hartog/The Ithacan
Junior quarterback Wolfgang Shafer sits on a bench Sept. 16 at Butterfield Stadium. After spending the 2014 season as a backup, he has now filled in as the starter for the Bombers football team and looks to lead the squad in 2015.
By Andrew Sullivan — Staff Writer
Published: September 16, 2015

For a quarterback, making the first start of a collegiate career is one thing. However, when making that start on the road against a program such as Union College, where the waves of boos and jeers from the crimson red sea of Union fans reverberate off the grounds of Frank Bailey Field, not to mention playing on live television in front of thousands of viewers, the odds seem insurmountable.

Ithaca College junior starting quarterback Wolfgang Shafer took those odds, chewed them up and swallowed them as he passed for 265 yards and two touchdowns while earning a well above-average Quarterback Rating of 118.9 as he led his team to victory Sept. 5 in a high-scoring affair, defeating the Dutchmen 38–23.

For the majority of first-time starting quarterbacks, there is a huge learning curve to become fully acclimated to the college game.

Shafer said there is a disparity between high school and college football when it boils down to the pace of the game.

“[College football] is faster than the high school game,” Shafer said. “You do not have a ton of time to be nervous. You just go and play your game.”

Although Shafer cites the college game to be more demanding, he has seen his fair share of obstacles playing football at the high school level.

During the summer before his senior year of high school at Fayetteville-Manlius High School, Shafer suffered fractures to the L4 and L5 vertebrae, which are located on the lower back.

Shafer said he struggled to maintain a positive outlook on the situation.

“My one dream that I have always had was to go play college football,” he said. “I’m a happy-go-lucky kid, [but] I experienced some depression then. I could not sleep or eat.”

As the summer progressed, Shafer said, the pain in his lower back surprisingly subsided. Shafer played his entire senior season for the Hornets and led the team to a 7–2 record at the end of the 2012 season.

Shafer said one of his biggest role models throughout his football career and his life has been his father Scott Shafer, the head coach of the Syracuse University football team.

His father’s passion for football has rubbed off on him, Shafer said.

“When I wake up in the morning at 5:30 when we have a 6 a.m. practice in the offseason, and I hit the alarm and I am like, ‘Damn, I do not want go out into the cold and go practice,’ I think back to my dad and his love for the game and his work ethic, and that gets me out of bed,” he said.

Senior tight end Kyle Hastings, who was a recipient of one of Shafer’s two touchdown throws against Union, said he was most impressed with Shafer’s poise inthe pocket.

“His calmness and how he was able to make his reads and not panic,” Hastings said. “He made a lot of difficult throws under pressure.”

After every practice, Shafer stays back and pulls aside a couple of his receivers to work in another five to 10 post routes and bubble screens.

Shafer said he wants to establish a frame of mind of settling for nothing less than perfect.

“We come out [onto the football field] to get extra reps on things we missed in practice,” he said. “It might be a throw that I make nine out of 10 ten times, but it was that one that I missed that [I tell the receivers], ‘Hey, let’s get it after practice.’”

Scott Shafer, who also played quarterback at the Division III level at Baldwin Wallace University from 1987–89, said he has shared the quarterback philosophies he lived by with his son since he was young.

“Part of being a quarterback is knowing how to manage a game,” Scott Shafer said. “You definitely need to have leadership skills and embrace being at that position … My biggest advice to him was always play the game for the love of the game, [and] fit into the system the head coach says is for that particular team.”

Shafer said watching and playing alongside his friend Syracuse senior quarterback Terrel Hunt as well as other quarterbacks during the offseason seven-on-seven workouts better prepared him for the quarterback competition in the preseason.

“I wanted to see how [Hunt] carried himself as a starting quarterback,” he said. “In my mind, I wanted to prepare myself like I was a starter. Watching him, especially his work ethic and his want to have a great influence on the guys around him, I admired that.”

For the immediate future, Shafer is purely concentrating on leading the Bombers to an NCAA Tournament berth. However, Shafer said he has two aspirations for the future, one being earning his pilot license and possibly becoming an instructor.

Shafer’s adoration for aviation began when he and his family lived in California when his father was the defensive coordinator and assistant head coach at Stanford University. Shafer’s neighbor flew for Alaska Airlines and offered him pilot lessons in a piper cub, a small, light aircraft intended for flight training as a 13-year-old.

Besides his passion for flying, Shafer said he likes to get away from football in order to relax before game day by watching Netflix — more specifically, “The Office” — as well as listening to and studying music.

Growing up, Shafer played the violin for five to six years as well as the trombone and the cello in middle school. However, his passion for music sprouted in high school when he began to listen to rap and hip-hop.

Shafer, who grew up in numerous states from coast to coast throughout his life, said he appreciates the influence artists have on the songs they produce.

“[With] me moving around so much, I got to experience the culture of it all,” he said. “I can listen to two different artists and have a decent idea where they are from just based on their style.”

Shafer also said he relishes how lyrics of artists such as J. Cole deliver messages to their audiences, and he tries to relate that to communication on the football field.

These hobbies in music and aviation, Shafer said, have sculpted him into the multidimensional individual he has worked toward.

“In high school … I was always the athlete,” he said. “I did not want to be known just as an athlete. I like to have other passions and have some intellect in other things. I think it is good to be worldly … Just being able to relate to different people, and having your own [identity].”

As for his future, Shafer said he wants to coach on the gridiron not only for his admiration for the game, but also to give individuals the opportunity to succeed at life.

“I’m a big believer in having a purpose in whatever you do,” he said. “I look at what [my dad] does. He helps kids get out [of difficult situations]. That is something that I got to see on a daily  basis … Just being able to help someone live a dream.”