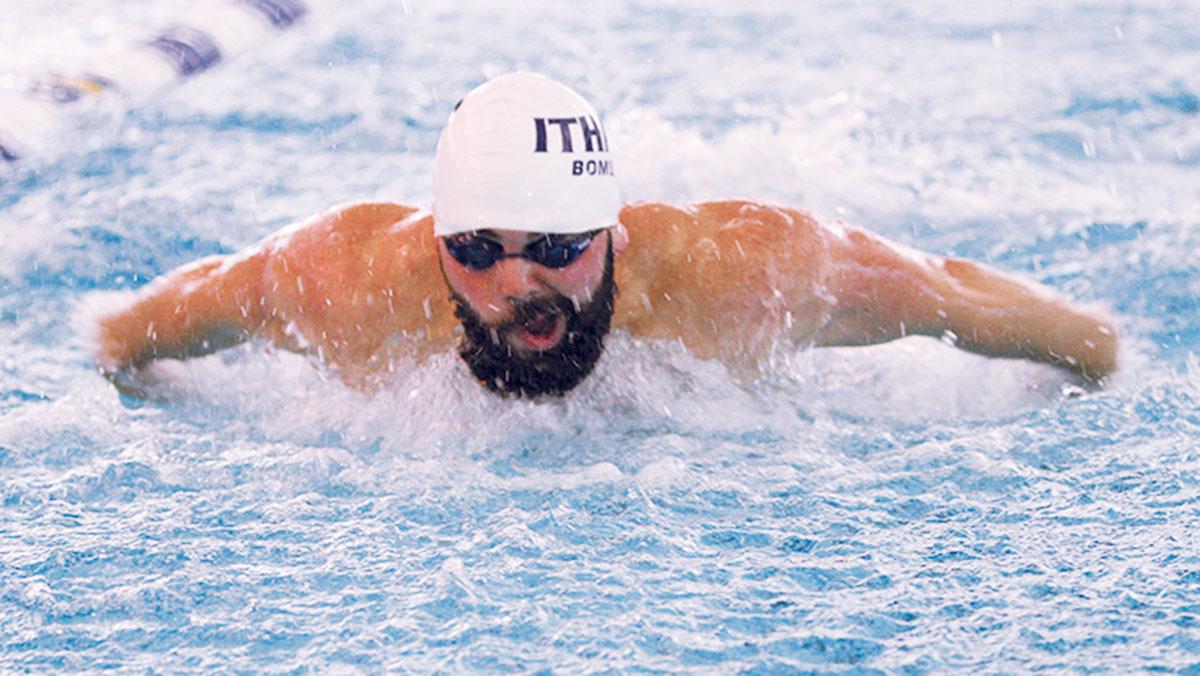 Kaitlyn Kelly/The Ithacan
Senior Lucas Zelehowsky competes in the 200-yard butterfly during the men’s swimming and diving team’s meet with Rensselaer Polytechnic Institute of Technology on Oct. 25 in the Athletics and Events Center Aquatics Pavilion. The Blue and Gold won the meet 186–112.
By The Ithacan — Ithacan Staff
Published: October 29, 2014

The football team shut down Salisbury University’s triple-option offense and snapped a two-game losing streak in a 32–7 win against the Sea Gulls on Oct. 25 at Butterfield Stadium.

“The thing is [the offensive line] was opening up the run game too, they weren’t just doing it for me,” Dempsey said. “I can’t give them enough credit.”

The Blue and Gold lost running backs, freshman Tristan Brown and senior Tommy Padula, to separate injuries during the game. Head coach Mike Welch said both Brown and Padula’s did not appear to be too serious.

With the win, the team remains in postseason contention and is one game behind St. John Fisher College in the loss column of the Empire 8 Standings. On Nov. 1, it will travel to Brockport, New York, to take on SUNY Brockport.

The men’s soccer team tied Houghton College 1–1 on Oct. 25 at Carp Wood Field after overtime. With this draw, the Bombers are now 4–1–1 in Empire 8 play.

The Blue and Gold opened the scoring in the 25th minute, with sophomore forward Sean Forward scoring off an assist from sophomore midfielder Brandon Thompson. This marked Forward’s fifth goal in the season, which leads the team. The Highlanders pushed hard in the first half to retake the tie and eventually broke through, as junior midfielder Tyler Inch scored in the 39th minute to tie up the game. In the second half and in both overtimes, neither team was able break the deadlock.

Senior midfielder Brandon Glass said he believes it was a fair result based on the team’s performance.

“In the end, it was a tale of two halves, and I thought both teams probably deserved a tie,” Glass said. “Being our second straight overtime game, I think we did extremely well to push through fatigue and some injuries to make sure we closed out the game.”

The women’s soccer team defeated Hartwick College 2–1 on Oct. 25 in its final home game of the season at Carp Wood Field.

The Blue and Gold had plenty of shots on goal and still appeared to be in control despite trailing 1–0 at the half.

Freshman midfielder Sierra Bentley gave Hartwick the lead in the 29th minute. However, in the second half, sophomore midfielder Taylor Baranowsky scored off a rebound to level the game at one in the 63rd minute. Shortly after, junior forward Sarah Woychick sealed the win with a goal in the 84th minute.

The Blue and Gold improved to 13–2 on the season. Head coach Mindy Quigg said she is very pleased with the way the season has played out, but believes the best is still yet to come.

“We’re right where we should be,” Quigg said. “We have a ton of potential, but we haven’t even come close to peaking in terms of optimal performance, that is what the postseason is for.”

The playoff-bound Bombers will be hosting the Empire 8 Championships Nov. 7–8 at Carp Wood Field.

The men’s and women’s swimming and diving teams competed in their third meet of the season on Oct. 25. Both teams defeated Rensselaer Polytechnic Institute of Technology by a score of 186–112 for the men’s team and the women’s team by a score of 164–136.

The men’s team finished its day with 15 first-place finishes in its individual events and relays. Senior Lucas Zelehowsky and junior Adam Zelehowsky finished with three individual first-place finishes each. Senior Matt Morrison swept the day on the diving board, winning both the 1-meter and 3-meter events. His scores of 329.40 and 315.85, respectively, qualified him for nationals at the end of the season.

On the women’s side, seven finished in first place in their respective events. The Bombers’ first victory came in the 200-yard medley relay, where they finished with a time of 1:51.96. Sophomore Grace Ayer placed first in three of her individual events. The women topped off the day with a win in the 400-yard freestyle relay in 3:43.36.

The women’s team is back in action on Nov. 5 when it hosts William Smith College at the Athletics and Events Center Aquatics Pavilion. Both teams will then compete against SUNY Cortland on Nov. 8 in Cortland, New York.

The field hockey team went 2–0 in the Empire 8 conference this week with wins over SUNY Brockport on Oct. 25 and SUNY Geneseo on Oct. 28.

Against the Golden Eagles in Brockport, New York, seven different Bombers found the back of the net in a commanding 7–1 win. Four of the goals came in the first half for the Blue and Gold, while the other three came within a 10-minute span to open up the second.

While facing the Knights at Higgins Stadium, it took the South Hill squad just over 96 minutes to earn a 2–1 win in double overtime. With the win, the Blue and Gold moved to 7–8 overall and 3–4 in the conference.

The Bombers’ final regular season matchup will be on Nov. 1 in Oneonta, New York, as they take on Hartwick College.

The women’s team finished in second place overall. Senior Hannah Wright led the Bombers with a 10th place finish at 23:25.1, and senior Emily Smith followed behind in 11th.

The men’s squad placed in third overall out of 11 teams. Junior Sawyer Hitchcock was the highest-placing Bomber, finishing in second with a time of 25:46.6. Sophomore Sean Phillips followed Hitchcock in sixth place at 26:23.9. Senior captain Dennis Ryan said he hopes the team can put the third-place finish behind them.

“We were disappointed with third, but we’re confident moving forward knowing we haven’t tapered back training yet,” Ryan said. “From here on, we’re only focused on improving for regionals.”

Both teams look forward to regional competition at the Empire 8 Championship on Nov. 1 in Saratoga Springs, New York.

The volleyball team began an important week of play on Oct. 22 when it hosted Wells College at Ben Light Gymnasium. The Bombers fell short to Wells, losing in the fifth set. Freshman outside hitter Joelle Goldstein led the team with 19 kills.

On Oct. 25, the Bombers hosted Nazareth College and Stevens Institute of Technology to compete for the top seed in the Empire 8 tournament. The Bombers lost to Nazareth in five sets. In game two of the doubleheader, the Blue and Gold lost in three straight sets. Goldstein led the team with 24 kills on the day as outside hitter Rylie Bean pitched in 22 kills.

The Bombers have secured the No. 3 seed for the Empire 8 conference tournament.

Gromen said the key for the team is to refocus and finish the season strong.

“Even though we didn’t get the results we wanted this week, we know that we need to practice more and keep working hard, so in two weeks, the results will be different,” Gromen said.

The South Hill squad will finish the regular season Oct. 31 and Nov. 1 at the Oneonta Dig Pink Invitational in Oneonta, New York.

The sculling team competed at the Head of the Fish Regatta on Oct. 25 in Saratoga Springs, New York.

The Head of the Fish Regatta had a variety of races and age groups, which allowed sculling and crew coaches Beth Greene and Becky Robinson to compete in the Masters Double, where they placed second.

“It is always fun to see your coaches do what they are trying to teach to you every  day,” Pfohl said. “To see them competing still shows us that crew doesn’t have to end after college.”

The sculling team’s last race of the season is the Collegiate Small Boat Challenge on Nov. 2 in West Windsor, New Jersey.