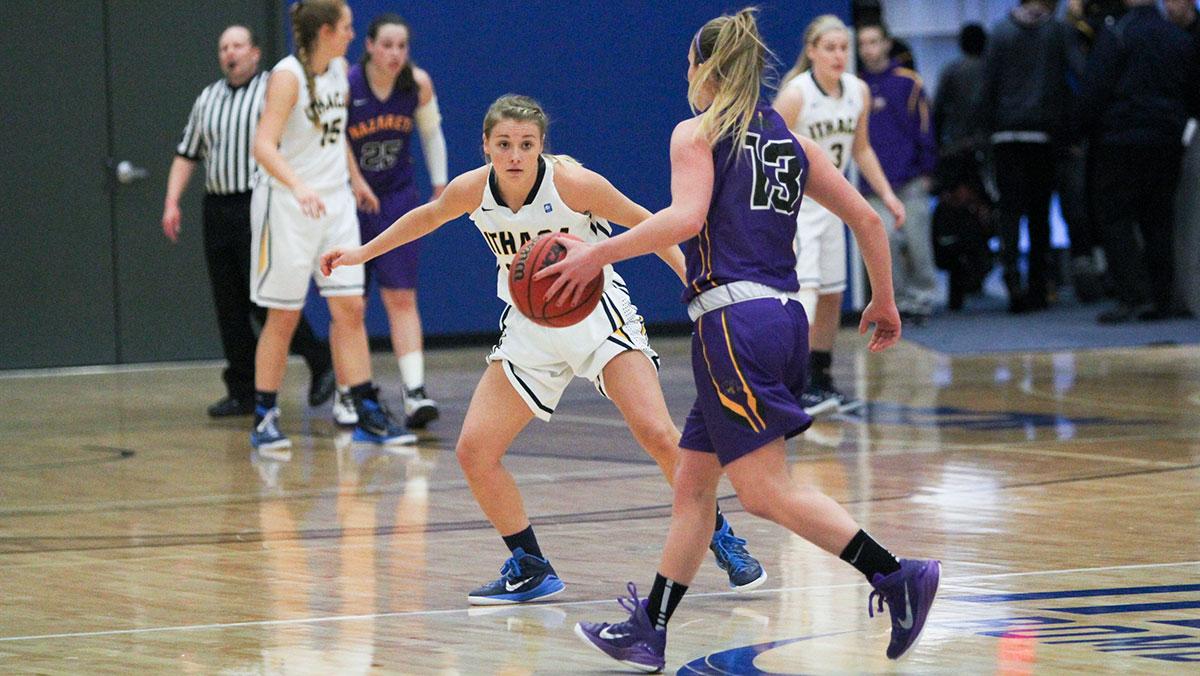 Catie Ihrig/The Ithacan
Freshman guard Erin Woop defends her opponent in the women’s basketball team’s 70–60 victory over Nazareth College Jan. 31. The Bombers own a 16–4 record on the season.
By Ithacan Sports Staff — The Ithacan
Published: February 4, 2015

The 40 points the Bombers placed on the scoreboard against Centenary marked their highest season scoring output of the year, topping their previous output of 37 points versus Rochester Institute of Technology on Dec. 10, 2014 when the squad won 37–7.

Freshman Jaison White led the way for the Blue and Gold in the Jan. 30 match, defeating nationally ranked Josh Sibblies 9–7. Overall, the Bombers posted victories in nine of 10 matchups against Centenary.

In the second match of the weekend, senior Alex Gomez and sophomores Nick Wahba and Jimmy Kaishian led the way for the South Hill squad as they posted victories in the first three rounds of the match. Freshman Nick Velez, sophomore Carlos Toribio and White posted the team’s other three victories in the upset.

The 8–2 South Hill squad is set to host the SUNY Oneonta Red Dragons on Feb. 4 at Ben Light Gymnasium. The Red Dragons are currently 7–7 coming into the match.

In the first home meet of the season, the gymnastics team lost to SUNY Brockport, dropping its record to 0–3 on the season. Brockport finished with a total score of 187.325 while the Bombers came up short, scoring 184.950.

Freshman Rachel Lee’s performance on the beam and senior Valerie Cohen’s floor routine earned them the highest scores of the day for the Blue and Gold at 9.550.

Lee tied Brockport’s Lily Jagodzinski for first place on the beam and freshman Kendra Balcerak took third place with a score of 9.525.

Cohen said though the Bombers are still looking for their first victory of the season, her young team continues to get better with each meet.

“Our team motto this year is ‘climb to excellence’ and the meet was another step up,” she said. “We’re not where we want to be, but our goal is to peak at the end of the season when it counts. We had our highest total of the season, consistently improving at every meet, so it’s great to know that our hard work is paying off.”

The Bombers will next compete Feb. 7 at the Cornell Invitational.

Both the men’s and women’s swimming and diving teams inched their way closer to postseason play with victories against Union College last weekend.

The women’s squad won its ninth-straight meet as it defeated Union 173–127 and improved to 16–1 on the season. The team finished with nine first-place finishes in total.

Both squads are back in action Feb. 14 at home as they host the Ithaca Invitational in the Athletics and Events Center Aquatics Pavilion.

The men’s and women’s track and field teams hosted the Bomber Invitational on Jan. 31 and Feb.1 at Glazer Arena.

The women’s team wrapped up its weekend with the pentathlon Feb.1. Sophomore Natalie Meyer won the event with a personal-best performance of 3,094 points, which currently ranks as the eighth-best in NCAA Division III.

The women’s squad also had three relay teams qualify for ECACs with two teams in the 800-meter relay and one in the 4×400-meter.

The women will be back in action Feb. 7 in Boston with the Boston University Red & White Invitational, while the men’s squad will host the Ithaca Invitational on the same day.

The men’s basketball team continued to make noise in the Empire 8 this weekend as the Bombers won two of three conference games during the past week.

The Blue and Gold started the weekend off with a solid 98–85 win over Utica College on Fill the Hill Night at Ben Light Gymnasium. Freshman Marc Chasin led the team with 31 points and eight assists in the 13-point victory. The Bombers had a good night shooting the ball, shooting 46.6 percent from the floor and 44.1 percent from behind the arc.

The Bombers were up 12 points at the half and scored 53 more in the second period to seal the victory.

Junior Sam Bevan led the Bombers with 20 points and shot 10-for-10 from the free-throw line in the victory over the Golden Flyers. The Bombers were tied with Nazareth to start the first half, but then went on a 21–3 run and never looked back. Chasin had 18 points in the victory and was named Empire 8 Player of the Week for his weekend performances.

However, the Bombers could not pull off the victory on the road Feb. 3.  The Bombers lost to Alfred University 73–59.

The South Hill squad’s next game will be against last-place Houghton College on Feb. 6 in Houghton, New York.

The women’s basketball team looked to remain among the top teams in the Empire 8 conference as it started its back end of the regular season schedule.

The Bombers hosted Utica College on Jan. 30, winning the game in blowout fashion, 104–47. The 104-point outburst is the second-highest scoring total for the Blue and Gold in program history. In a balanced scoring attack, senior guard Ally Mnich led the team with 19 points.

The Bombers had a quick turnaround as they hosted Nazareth College on Jan. 31. The game was an exciting back-and-forth match, but the Bombers pulled away at the end, 70–60. Sophomore guard Ali Ricchiuti led all players in scoring with 17 points and grabbed five rebounds.

The Blue and Gold then traveled to Alfred University on Feb. 3 to play the Saxons. The Bombers rolled past Alfred by a score of 86–48. Ricchiuti and junior guard Keri Steele both poured in 15 points while senior forward Francesca Cotrupe grabbed 10 rebounds.

Despite the team’s recent blowouts, freshman guard Jordan Beers said it cannot get complacent with the wins.

“We have to continue to push each other during practice and try to get better every day,” she said.

The Bombers are currently tied for first in the conference with a 10–1 record. The team will travel to Houghton, New York, to take on Houghton College on Feb. 6.