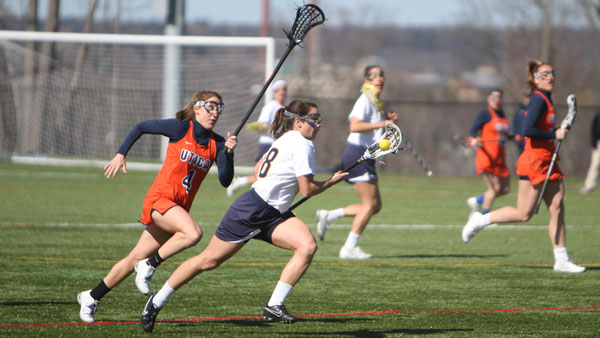 Tucker Mitchell/The Ithacan
From left, Utica College junior defender Patricia Kane tries to steal the ball from sophomore midfielder Riley Marion during the Bombers’ 15–0 win against the Pioneers on April 24 at Higgins Stadium.
By The Ithacan — Ithacan Staff
Published: April 29, 2014

The men’s crew team took first-place honors against Williams College and United States Coast Guard Academy on April 26 in Williamstown, Mass. The Blue and Gold’s top boat was able to cross the finish line with a time of 6:12.4, slightly ahead of Williams’ 6.14.6. The men’s second Varsity 8 boat finished in second place with a time of 6:21.2, placing behind Williams, which finished with a time of 6:18.5.

Both squads will enter postseason play in the New York State Championships at 4 p.m. May 3–4 in Whitney Point, N.Y.

The Blue and Gold ruined their perfect Empire 8 record with a 15–11 loss to Stevens Institute of Technology on April 27 at Higgins Stadium.

The Ducks began the game on a tear, gaining a 3–0 lead early in the first quarter. Stevens gained a steady lead going into halftime, leading the Bombers 10–5.

In the third quarter, the Blue and Gold came within three points with scores from senior midfielder Ryan Burns and senior attack Pat Slawta. Burns led the offense with four goals and one assist. The fourth quarter was led by the Bombers offense, with two scores each from Burns and junior attack James Manilla. However, it was not enough for the Blue and Gold to move past the Ducks.

The Bombers begin their postseason play for the E8 Tournament against the Ducks on April 30 at Higgins Stadium.

The women’s lacrosse team improved its record to 11–5 after defeating Utica College 15–0 at Higgins Stadium on April 24. The Bombers are now 7–0 in Empire 8 conference matchups and have won 10 of their last 11 games.

The Bombers locked up the No. 1 seed in the E8 tournament, and they will play a team to be determined at 3 p.m. on May 3 at Higgins Stadium.

The men’s track and field team took to the track twice for the Penn Relays on April 25 in Philadelphia and Cornell’s Big Red Invitational on April 27 at Cornell University.

At the Penn Relays, sophomore distance runner Sawyer Hitchcock ran a 9:23.44 in the 3,000-meter steeplechase. At the Cornell Invitational, the South Hill squad had nine competitions where it finished in the top 10. The highest finish was second place for the 4×100-meter relay team where junior Kyle MacKinnon, sophomores Zane Scott and Jeff Hejna and freshman Nick DiNapoli clocked in at 44.52.

The women’s track and field team solely travelled to the Cornell Big Red Invitational as a team last week, where it reached 13 Eastern Collegiate Athletic Conference qualifiers. Junior jumper Emilia Scheemaker placed sixth in the long run with a mark of 5.29 meters.

Both teams will compete from May 2–3 at the New York State Collegiate Track Conference Championship in Rochester, N.Y.

The baseball team won all four of its games April 26–27, defeating both SUNY New Paltz and York College in doubleheaders.

The Bombers began the weekend with a 7–2 win against New Paltz in New Paltz, N.Y. Senior outfielder Luke Stark led off the game with a solo home run. The Blue and Gold added one run in both the second and third innings to take a 3–0 lead. New Paltz responded with two combined runs in the fourth and fifth innings, but the Bombers pulled away with four runs in the final two innings. Sophomore pitcher Benji Parkes picked up the win on the mound.

The Bombers won game two 11–1. Senior third baseman Colby Gee hit a solo home run in the fourth inning, which was his fourth of the season. Freshman third baseman Trevor Thompson also hit one out of the park with a two-run homer in the sixth inning. Senior pitcher David Jasukonis earned the win with a complete game, giving up one earned run and four hits to go with five strikeouts.

The South Hill squad continued its dominance against York, winning game one 7–2 in York, Pa. Junior pitcher John Prendergast pitched a complete game, giving up eight hits and one earned run. With the win, Prendergast received his 28th career pitching victory, tying him for second in program history. The Bombers won game two 8–5. The Blue and Gold established an 8–0 lead, including scoring five runs in the sixth inning. York responded with two runs in the sixth inning and three in the seventh, but the Bombers closed out the victory. In the win, junior pitcher Andrew Sanders earned his fifth win of the season.

The Blue and Gold will face SUNY Brockport on May 10 in Brockport, N.Y., in their regular season finale.

The softball team finished its regular season with three wins and three losses playing doubleheaders on April 24, 27 and 28 at Kostrinsky Field.

In the first game against Alfred University on April 24, senior pitcher Sam Bender struck out four and allowed five hits while giving up two runs in the Bombers’ 3–2 win.

In the second game, the Bombers were defeated by the Saxons 3–1. Sophomore pitcher Laura Quicker struck out three batters and allowed three runs.

In the team’s first game against University of Rochester on April 27, Bender pitched and gave up 10 hits and two earned runs in a 3–0 defeat. As a team, the Bombers collected only three hits in the loss.

In the second game against Rochester, the Bombers were shut out, losing 7–0. Quicker was the starting pitcher and allowed three runs while striking out two. Junior shortstop Francesca Busa went 2-for-3 and had two stolen bases.

The final doubleheader of the season pitted the Blue and Gold against Rensselaer Polytechnic Institute on April 28, with the Bombers winning both games 3–0 and 7–6, respectively.

Bender started the first game, allowing five hits to go along with five strikeouts. At the plate, senior second baseman Julianne Vincent went 3-for-4 with an RBI.

Bender was also the starting pitcher for the second game, but only pitched two innings after allowing five hits and giving up one run. Rusa hit the game-winning single in the ninth inning off of freshman pitcher Stephanie Caudle.

The Blue and Gold ended their regular season with a 21–11 overall record.

The men’s tennis team competed in three matches from April 25–27. On April 25, the team travelled to Alfred, N.Y., to face Alfred University. The Bombers finished the day with seven match wins and two losses.

The Bombers stayed in Alfred for the Saturday matches and shut out Houghton College 9–0. Freshman Brandon Buksbaum recorded his first victory of the season, decisively winning both sets 6–1.

The Blue and Gold wrapped up their regular season April 27 at Glazer Arena against Connecticut College. The Bombers lost the match 7–2. The team’s only two victories of the day came in the singles matches.

The Blue and Gold will begin postseason play May 3 in Rochester, N.Y., for the Empire 8 semifinals, though their opponent has yet to be determined.

Out of the five teams competing, the Bombers ended the tournament with a third-place finish, finishing with 634 total strokes. Methodist University and Williams College both placed in front of the Bombers with scores of 620 and 622, respectively.

Junior Sharon Li finished first overall among all participants in the tournament with a career-best 68 in round one and a 73 in round two, finishing with a total score of 141. Li broke the school record of 143, which she originally set in 2012 against SUNY Cortland.

Freshman Lisa Calcasola also shot a career-best 79 on the final day of the tournament. Calcasola finished with a score of 165.

The Bombers may qualify for an at-large NCAA Tournament bid, but a decision won’t be announced until May 5.