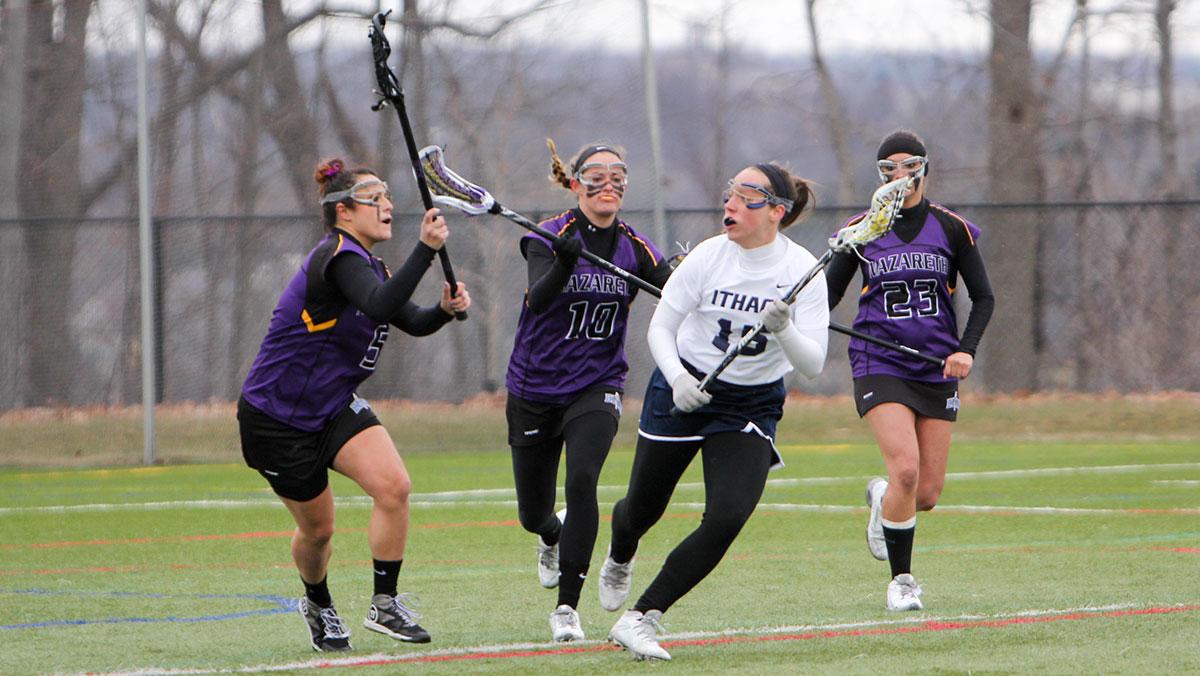 Behind a dominant pitching performance from senior Andrew Sanders, the baseball team won its only game of the week April 14 against Houghton College by a score of 6–3.

The Bombers traveled to Houghton and got off to a slow start before racking up four runs in the top of the fifth inning thanks to hits from sophomores Josh Savacool and Trevor Thompson, and junior Zach Cole. The team tacked on another two runs in the top of the eighth on a double from senior Matt Connolly and a triple from freshman Dominic Boresta.

Houghton would respond to score three in the bottom of the eighth, but senior pitcher Jimmy Wagner took over to close out the game with a four-out save.

Boresta finished the game with three hits and an RBI — his first of the season — to lead the Blue and Gold. Thompson and Connolly each recorded two hits. Sanders pitched 7 2/3 innings, giving up five hits and striking out four Highlanders to earn his third win of the season.

The South Hill squad will play its next game against the University of Rochester on April 16 at Freeman Field for its first home game of the season.

The Blue and Gold will then take the field April 18 in a doubleheader at Utica College.

The Bombers first defended the Cayuga Inlet on April 11. The men’s team took on St. Lawrence University and Skidmore College, while the women’s team raced against Skidmore and Smith College. On April 12, both teams squared off against SUNY Geneseo and St. John Fisher College. The Bombers swept the competition on both days.

Meanwhile, the women’s first varsity boat came in first, posting a time of 7:09.9, the closest boat was almost a full 30 seconds behind the Bombers.

This brings both teams to a record of 2–0 despite having cancelled the first regatta of the season. The Bombers look to take this momentum into their next regatta, as they travel to their first away regatta in Worcester, Massachusetts, to take on four different schools April 18.

The men’s lacrosse team played two important conference games this past week. On April 8, the Bombers took on Utica College, where they dominated the game, 12–5. Later on in the week, the Blue and Gold faced Nazareth College on April 11, where they fell short 9–6, suffering their first conference loss of the season.

In the game against the Utica College Pioneers, sophomore attack Jack Shumway led the way for the Bombers with a career-high five goals and two assists. Sophomore attacks Sean Ferrito and John Januszkiewicz each added two goals and an assist.

The loss to the Golden Flyers was a close matchup throughout the entire game. Though the Bombers led for a majority of the game, Nazareth was able to outscore the South Hill squad 5–0 within the final 15 minutes of the game to take the win. Shumway, once again led the way, recording two goals for the Blue and Gold. Three other players each scored one goal while four Bombers recorded assists in the game.

The Bombers are now 9–4 overall and 4–1 in the Empire 8. Next up on their schedule is a home game against Hartwick College on April 18.

The Bombers bounced back after a 14–13 double-overtime loss to Stevens Institute of Technology by winning three games in a row.

On April 8, they traveled to William Smith College and fought to a 12–9 win. Down 7–5 at the half, the offense found its groove and outscored the Herons 7–2 in the final frame en route to the win.

Senior attack Natalie Lang and junior attack Ally Runyon led the way for the Bombers with three goals apiece, while freshman goalie Kimberly Presuto contributed eight saves in the game to help the South Hill squad to a win. Three different players had assists for the team.

Three days later, the South Hill squad was back in action when Nazareth College paid a visit to Higgins Stadium on April 11. The Bombers scored eight goals in each half, led by sophomore midfielder Morgan Cadwell’s four scores, while Presuto made 11 saves to keep the game out of reach.

It was a quick turnaround as the team played host to Alfred University the next day. The Bombers’ firepower proved too much for the visiting Saxons, as 15 different players scored for the home team and the squad cruised to a convincing 21–2 victory. Senior midfielder Molly Fischer led the way with three goals, while the Bomber defense allowed Alfred just four shots total the entire game.

The team now heads into the final stretch of its season with just four regular season games remaining. The Bombers get back into action April 17 when they visit SUNY Geneseo.

The Bombers began the week with two convincing wins over Houghton on April 11. The South Hill squad defeated the Highlanders 11–2 and 11–1, and junior pitchers Laura Quicker and Allison Macari picked up wins in the circle.

On April 12, the Blue and Gold fell to Alfred twice by scores of 10–5 and 11–3. Senior Francesca Busa, junior Kelly Robichaud and freshman Emily Bloom each recorded hits in the first game for the Bombers, while Robichaud and junior Casey Gavin had two-hit games in the second game of the doubleheader.

The team bounced back April 14 with two wins over the Pioneers. The Bombers squeaked out a 2–0 victory in the first game on the back of a complete-game shutout from Quicker and two RBIs from Gavin. The offense came alive in the second game as the South Hill squad won easily: 13–2. Robichaud, Gavin and Bloom each collected three hits in the game. Five other players had two hits for the Bombers, who improved to 10–10 on the season. Macari pitched a complete game, allowing two runs on seven Utica College hits.

The team also played Rensselaer Polytechnic Institute on April 15. Score was not available at time of print. The Bombers return to action April 18 with a doubleheader against St. John Fisher College.

On April 12, the men’s tennis team lost its only match of the week to nationally ranked The College of New Jersey 8–1.

The South Hill squad’s lone victory came from the racket of sophomore Wes Davis, who helped the Bombers avoid the shutout by knocking off TCNJ’s Chris D’Agostino in two out of three sets. Junior Chris Hayes said despite the loss, the team is still staying positive and looking ahead to its future matches.

“The only thing we can do is move on and focus on our conference matches,” he said. “We are looking forward to a good week of practice and we will be ready for it.”

The Blue and Gold are looking to end a two-game slide as they face off against conference foe Nazareth College at Glazer Arena on April 19. The Bombers look to extend their winning streak versus the Golden Flyers, as the team’s last loss to Nazareth came in the 2011–12 season. The four matches the Bombers have left in their season are all against Empire 8 opponents, leading up to the Empire 8 tournament May 2.

The women’s track and field team carried its success from its first outdoor meet into Moravian’s Coach P Invitational on April 10 and 11 in Bethlehem, Pennsylvania, collecting seven first-place finishes. The men’s team split in half for the weekend, with most of its athletes traveling to Moravian College with the women’s team, while its distance runners traveled to Bucknell University on April 10.

On the women’s side, the Bombers’ individual first-place finishers consisted of senior Kristina Stockburger in the hammer throw, senior Alexa Rick in the 5,000-meter run, sophomore Brandy Smith in discus, senior Leigh Martino in the 400-hurdles, junior Eliza Dewart in the 200-meter dash, senior Emilia Scheemaker in the triple jump and freshman Taryn Cordani in the 800-meter run, among Division III schools.

Not only did Stockburger score first in hammer throw, her teammates followed suit and helped secure five spots in the top eight.

Head coach Jennifer Potter said she was happy with her team’s performance at the meet.

“Working hard pays off, and we need to build on these performances towards postseason,” Potter said.

The teams will return to the track for the Empire 8 Conference Championships on April 19 at St. John Fisher College.