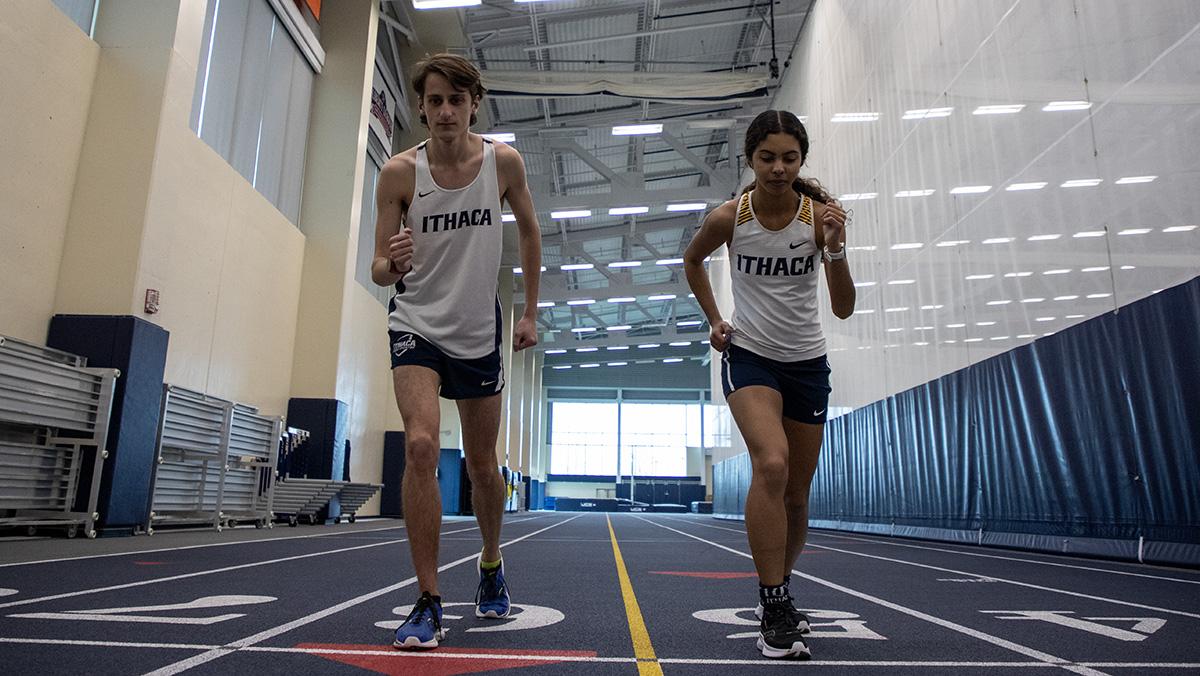 Although neither program qualified for the NCAA Division III National Championship as a team, the Ithaca College men’s and women’s cross-country teams both had representation in Lansing, Michigan, on Nov. 19.

Through frigid midwest temperatures, wind and snow, first-year student Jessica Goode represented the college for the women and finished in 117th place out of 292 finishers while senior Danny Jagoe represented the men for the second straight year and took 71st out of 289 finishers.

At Regionals on Nov. 12, which were held in Rochester, New York, the men finished in 10th place and the women finished in third, both out of 24 teams. While there was hope that the women could earn an at-large bid, since only the top team in each region qualified automatically, the Bombers fell just short of the 32-team field.

Erin Dinan, head coach of the women’s team, said the runners were disappointed to hear they did not qualify for the meet considering how close they were, but at the same time they found out that Goode would be running, which provided a silver lining for the athletes.

Dinan said it is rare for a first-year student to qualify individually for Nationals, in her experience. In her 17-year career at the college, she said she cannot remember another time it has happened to a student she coached, but she praised Goode’s work ethic and motivation to get there.

“She just knows what she needs to do [to improve],” Dinan said. “She has this confidence to be able to go out there and … she’s like, ‘I’m going to do this. I’m going to give this a go, and let’s get after it.’”

Goode was the top runner for the Bombers in each of her races this season, including a third-place finish at the Liberty League Championships and 12th at the NCAA Regionals. While the idea of competing at Nationals became more and more likely as the season went on, Goode said she did not expect to make it this far in her first season.

“I came from a team in high school where I wasn’t the top runner,” Goode said. “So [being the top runner] is a fun new feeling for me, at least. And I lead with pride when we’re going off the starting line.”

Goode also said there was an adjustment to both the level of competition and the high energy from fans at the meet. Because many cross-country courses go through the woods, the sport is not conducive to spectators. But the course at Nationals was on a golf course with more open space, meaning it was easier for fans to watch.

“The energy was like no other race,” Goode said. “There were so many supporters and fans from a bunch of different schools and teams just screaming at you. … It motivated me to keep running. And while running, I was like, ‘It’s an honor to be here and be among the best of the best.’”

In a text message, Jagoe praised Goode’s talent and said she has a high ceiling for years to come. The praise comes from an athlete who has plenty of experience on the biggest stage. As a sophomore in 2019, Jagoe ran when the entire team earned a Nationals bid and went alongside Ben Tiber ’22 in 2021 as an individual, earning 208th place out of 289 finishers.

This was the first year, though, that Jagoe was running the race alone. He traveled with Goode, but it was a new experience running the final race of the year without a teammate next to him.

“That was a weird adjustment,” Jagoe said. “But I did have Jess [Goode] and my teammates showed up [to support me]. It isn’t, like, an isolating feeling running a cross-country race by yourself, but what makes it so much better are the people who are there for you.”

Jagoe also said he used the disappointment of his finish a year ago to provide himself with extra motivation. He said he started too slow in the race and it cost him, keeping him from catching up to the pack, but nearly overcorrected this year by starting too fast.

“I got out and I was in front of the [eventual] National Champion Alex Philip … and I thought, ‘Oh, I’ve made a mistake,’” Jagoe said. “But in the end, I don’t think I really regret that move. … To make that move and to finish where I did, I think things would’ve gone way worse for me had I gone out even slightly less aggressively.”

In addition to Dinan and Jim Nichols, head coach of the men’s team, Jagoe said six athletes — three men and three women — made the drive to Lansing to support their teammates. Goode said she was appreciative of the support from her friends.

“I felt like I wasn’t alone out there,” Goode said. “I wasn’t the only Ithaca person, we have our own little army, you could say.”

In an email, Goode added that she was thankful for her teammates and coaches for pushing her onward during the season and the race. She said she would not have made it as far as she did without their help.

Along with the small squad of teammates, Jagoe said he and Goode connected with former coaches and Ithaca College alumni at the meet, forming a bond with fellow individual competitors.

For Jagoe, reconnecting with a former assistant coach, John Davis ’11, who is now the men’s and women’s cross-country head coach at SUNY Brockport, and meeting his athletes gave him a sense of camaraderie. The Brockport Golden Eagles also sent two individuals, one man and one woman, to Lansing.

“It was really cool to be able to run with one of [my former coach’s athletes],” Jagoe said. “We both were here individually, so let’s work together and try and figure it out.”

Although neither of the athletes finished as an All-American, which is the athletes who finish in the top 40, neither of them are disappointed in their seasons. The meet represented the last collegiate cross-country competition for Jagoe, who said he looked back fondly on his time at the college.

“It goes by fast, you know?” Jagoe said. “It’s a lot of just living in the moment and wishing you had more time. God, I wish I had more time, but you know, that was it for me for cross-country. I’m excited to see what these guys can do going forward.”

Nichols said Jagoe should be satisfied, both with his performance and his college career, because he always gave his all.

“Being a three-time National qualifier in cross-country is quite an accomplishment,” Nichols said. “He’s been a great representative of our program and a great athlete. I’ll miss him next year, that’s for sure.”

Goode, on the other hand, has plenty of time left on the team. She said she is happy with her 117th-place finish because it shows her that she was meant to be there and that it was not just a fluke. Looking forward to the next few seasons, she has a positive outlook on what is to come.

“This is a good start. This is a very good start,” Goode said. “I always try to have running be fun so that it doesn’t become stressful. Right now, it’s just really fun.”