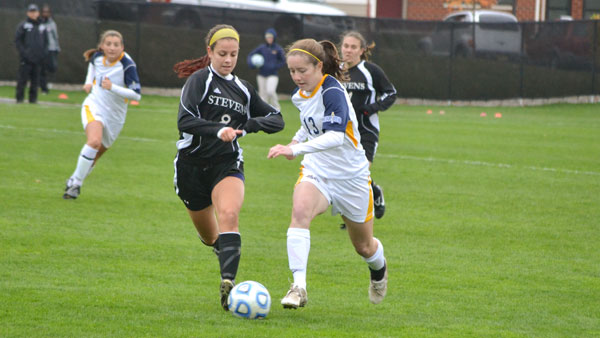 With a No. 5 rank in Division III, the women’s soccer team is the only Empire 8 women’s soccer squad to be ranked in the top-25 teams nationally. However, past experience has taught the team that rankings don’t ensure success in the postseason.

In the Sweet Sixteen round of the NCAA Tournament last season, the then-ranked No. 6 Bombers lost in penalty kicks to then–No. 10 Misericordia University.

Despite avenging the loss to Misericordia and defeating former–No. 2 ranked Emory University this season, senior forward Jackie Rodabaugh said the team is not letting its improved ranking affect postseason preparation.

“There’s this line that’s been sticking in my head that Coach said a couple of weeks ago, and it’s just ‘You can’t rely on expectations; you have to work your butt off to get there,’” Rodabaugh said. “We need to stay kind of humble and we can’t expect to be successful, we need to work to be successful.”

With an overall record of 14–1, the Bombers have already experienced success this season. The team is riding a 10-game winning streak after defeating Stevens Institute of Technology on Oct. 26. The win against the Ducks earned the Bombers the right to host the Empire 8 conference tournament on Nov. 9 and 10. Sophomore forward Sarah Woychick said the home-field advantage will help the Blue and Gold during the tournament.

“You never want to travel, you always want to play on your home field with all of your fans,” Woychick said. “The fans and the atmosphere really get you psyched.”

Some of the Bombers’ biggest wins have been on Carp Wood Field this year, including victories against the nationally ranked Emory and Misericordia. Both teams are potential opponents for the Bombers in the NCAA tournament. But for now, Woychick said the team is focusing on advancing past the Empire 8 tournament.

Rodabaugh said the Bombers have been preparing for the tournament by practicing penalty kicks. Both the victory against Nazareth College in the 2012 conference championship game and its loss to Misericordia on Nov. 17, 2012, came down to penalty kicks.

“They have been huge these past few years,” Rodabaugh said. “We’re also just focusing a lot on us. We learn more specifically about other teams once we get there, but we are really focusing on the process of how we can improve and how we can be one step above our opponents.”

Head coach Mindy Quigg said her team’s defense has consistently allowed the Blue and Gold to defeat its opponents so far this season. The Bomber defense has allowed just three goals in 15 games and has combined for 12 shutouts.

Even though Quigg said the team’s defense has been its strong suit, she also said noted the potential for improvement.

Woychick, who is participating in her first collegiate postseason, also stressed the importance of experience on the team. The Bombers feature 10 seniors and two juniors who were underclassmen when the team advanced to the Final Four in 2011.

Rodabaugh, who was a sophomore when the team travelled to San Antonio in 2011, said the upperclassmen have helped their new teammates get ready for the postseason atmosphere.

“We were explaining to some of the younger ones the other day about postseason and how it work and how amazing it is to be in a tournament,” she said. “They’re feeding off our energy with it.”

The Bombers have a long way to go before they reach the Final Four again, but the road begins with the Empire 8 tournament, which will take place Nov. 9 and 10 on Carp Wood Field. For Rodabaugh, the conference tournament will serve as a springboard to propel the team into the NCAA playoffs.

“It’s a completely different energy and atmosphere,” Rodabaugh said of the postseason. “Practices tend to get a little bit lighter, but the things we are doing are so important. It’s an amazing feeling to know that you’re one of the last teams out there in the fall season.”