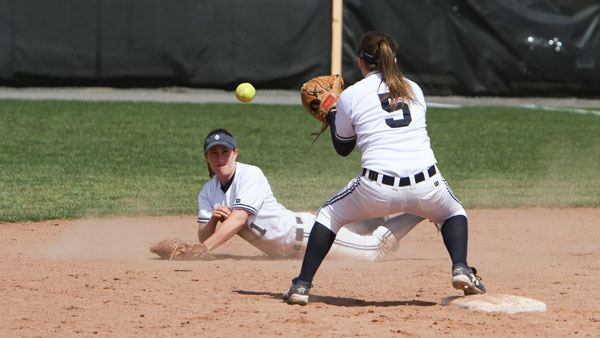 The softball team collected 1–0 and 5–1 wins against Stevens Institute of Technology on April 19 on Kostrinsky Field. This sweep brings the Bombers to an 18–8 season record and a 7–3 record in the conference.

Senior pitcher Sam Bender started on the mound for the Bombers, securing three strikeouts to cap off the complete game shutout. At the plate, junior shortstop Francesca Busa hit 1-for-3 with a double and the game’s only RBI. Senior third baseman Sydney Folk went 2-for-3 at the plate and also had a double.

Though the Bombers got the win this game, Folk said playing Stevens wasn’t easy, but she was satisfied with the team’s efforts.

“[Stevens] challenged us, but we came out and we played the way that we could, and we showed today what this team is made of and what we’re capable of,” she said.

Conference games are usually more important for the team because they determine if the team gets into the conference tournament or not. But Folk said the team didn’t want to over think the doubleheader with the Ducks.

“Today we came in, and we wanted to just have fun, let loose and play like we know we can.”

Bender also started game two and only allowed one run. At bat, Folk went 2-for-3 with a double and three RBIs. Freshman outfielder Jessie Fleck went 2-for-2, hitting two singles. Fleck also scored two runs and picked up an RBI.

Senior second baseman Julianne Vincent said despite playing a team like Stevens, the Bombers played just as they would against any other team in the conference.

“[Stevens] is no more difficult than any other conference game,” she said. “We get pumped up the same for each game, and that’s when we play our best. We don’t play the opponent, we’re just going to play our game.”

Sophomore outfielder Tara Condon said the team is excited to keep its momentum going after a win like this.

“We felt great today, everything clicked, we played really good and true,” she said. “For us, this is what Bomber softball is; this is what it means to us and we’re just so excited that this is where we’re going towards, and we can’t wait to continue this into the following games.”

The Blue and Gold will return to action at 3 p.m April 23 on Kostrinsky Field in another conference doubleheader against Alfred University.