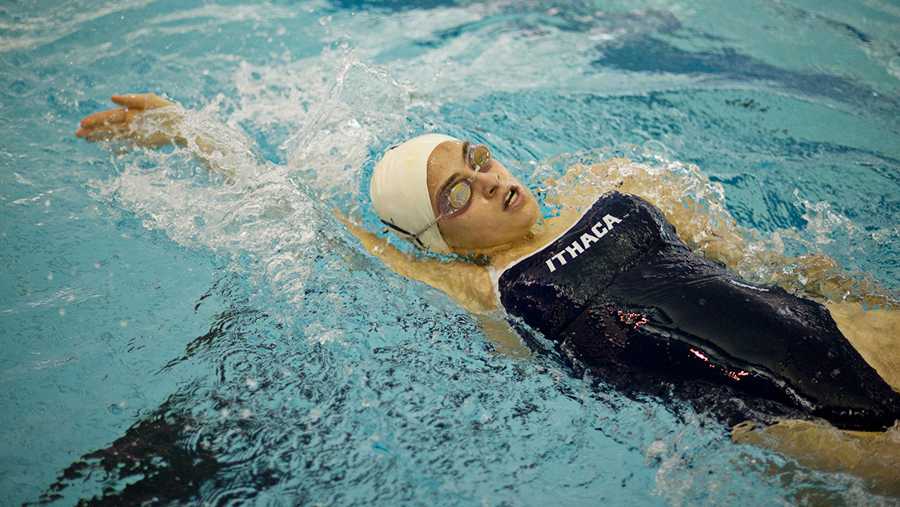 Before the meet began, both the men’s and women’s teams took time to honor their senior swimmers and reflect on their individual accomplishments.

The women’s team began the competition off strong with juniors Grace Ayer and Samantha Reilly and seniors Megan Zart and Lauren Cox finishing with a time of 1:51.48 in the 200-yard medley relay to win the event.

Ayer went on to win the 100-yard backstroke, coming in just under a minute with a time of 59.69. Reilly, freshman Miria Teneza and sophomore Cori Ghidotti placed first, second and third in the 100-yard breaststroke to maintain the team’s lead. Freshman Casey Koenig scored big for the team, winning both the 200-yard butterfly in a time of 2:17.31 and the 200-yard breaststroke in 2:34.45.

Sophomore Lindsey Suddaby finished first in the 1-meter diving event, her first win of the season, with 276.25 points. Sophomore Katie Helly was close behind in third place with a score of 250.20. Helly also placed second in the 3-meter event with a score of 267.85, finishing behind Union’s Sarah Dimmitt.

The men’s team also saw success early on in the meet, with freshman Bradley Keith, sophomore Aidan Hartswick and seniors Vincent Dodero and Jeremy Kingsley taking first in the 200-yard medley relay with a time of 1:39.05.

They went on to place in the top four spots in the 200 free. Freshman Aaron Levin won the event, finishing in 1:47.61. He also went on to win the 50-yard freestyle with a time of 21.78. Senior Jonathan Husson, Dodero and Kingsley finished second, third and fourth behind Levin.

The Bombers finished the meet strong in the 400-yard freestyle relay. Dodero, Kingsley and freshmen Lucas Radouch and Kellen Scanlan won the event with a time of 3:18.98.

Freshman Scott Hillen led the men’s diving team in points, finishing second in both the 3-meter and 1-meter diving events with scores of 311.30 and 286.45, respectively.

The men’s and women’s swimming and diving teams will host the Ithaca Invitational at 1 p.m. Feb. 13 in the Athletics and Events Center. This will be the final meet before the team heads into the 2016 UNYSCSA/Empire 8 Championship.