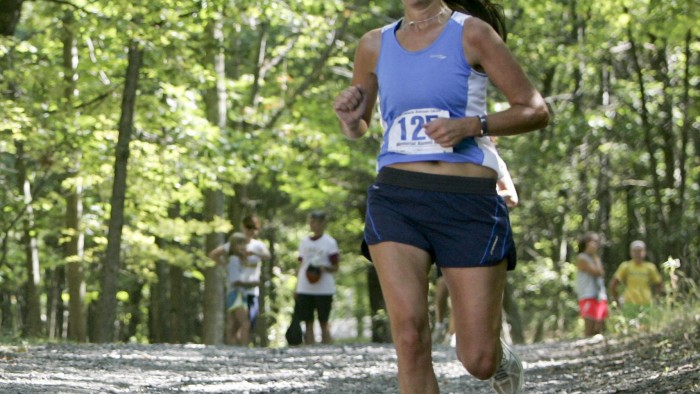 Dinan’s love and training for cross country began at a young age, and now, as the new head coach, Dinan hopes to bring her team back to the national championship meet by introducing new mental and physical training techniques.

Dinan said the advice she received from a coach at an eighth-grade track meet in Waterloo, N.Y., inspired her to run cross country after she came in at the end of the pack in the 100-meter dash.

The following year, Dinan did just that and qualified for the regional competition. After discovering her love and ability for distance running, she competed for four years in high school cross country. She continued on to SUNY-Cortland where she trained under nationally known coach Jack Daniels.

After graduation, Dinan became interested in coaching and moved to Ithaca for an opportunity to coach under the founder of the college’s women’s cross country program, William Ware. After speaking with him a few times, she ran into Ware, also known as Wally, at Rogan’s Corner. It was there that Dinan said she found out she had gotten an assistant coaching position.

“We had spoken once or twice to ask if they needed help, but I wasn’t sure, and I hadn’t heard anything,” she said. “So I went into Rogan’s, and there’s Wally, and he says, ‘Hey! We need to get your head shot for the media guide.’ And I was like, well I guess I have a job.”

Dinan began her assistant coaching position in the fall of 2006 and served as a liaison between the women on the team and Ware. In addition, she was in charge of making sure the women had transportation for practices and received the help and treatment that they needed.

Senior captain Rachel Spirito said Dinan’s presence as a female, youthful coach made her a great asset to the team and makes her an even better head coach.

“She was very open to have anyone talk to her, and she was really easy to talk to about injuries or anything we needed to,” she said. “She was just so invested in the team and still is.”

After six seasons under Ware, Dinan was named head coach of the women’s cross country program for this upcoming season. When finding out the news, Dinan said she was thrilled and honored, but she knew it was time to get to work.

“I know I have big shoes to fill because I am following Wally,” she said. “So as soon as I found out, I was super excited, but I got straight into planning mode because I had to get everyone ready for the season, getting the freshmen in, and get training ready to go.”

Dinan plans to make some modifications to the training schedule for the athletes in the hope of another winning season and qualifying the team for the national championship. In addition to her work as the cross country coach, Dinan also works as the assistant track coach, training the long distance runners. She said she plans to shift the team’s workouts to resemble their track season training in order to adapt to the additional 1,000 meters added to the national championship race. These changes include training methods to develop each individual athlete and teach the team the correct mentality for running a six-kilometer race.

“I want to be competitive and I want to bring the girls to the nationals, but I felt if things get too serious, sometimes we lose why we started this in the first place,” she said. “I want to be successful in my lessons this season so I can take away more as a head coach.”

Senior Carly Graham said Dinan is focused on her head coaching duties and helping the team get even better, but Graham also said Dinan makes the team more comfortable and optimistic about the season.

“Since she became head coach, we have gotten even closer to her,” she said. “She is more than a coach to us because of how comfortable she makes us and how well she knows us already.”