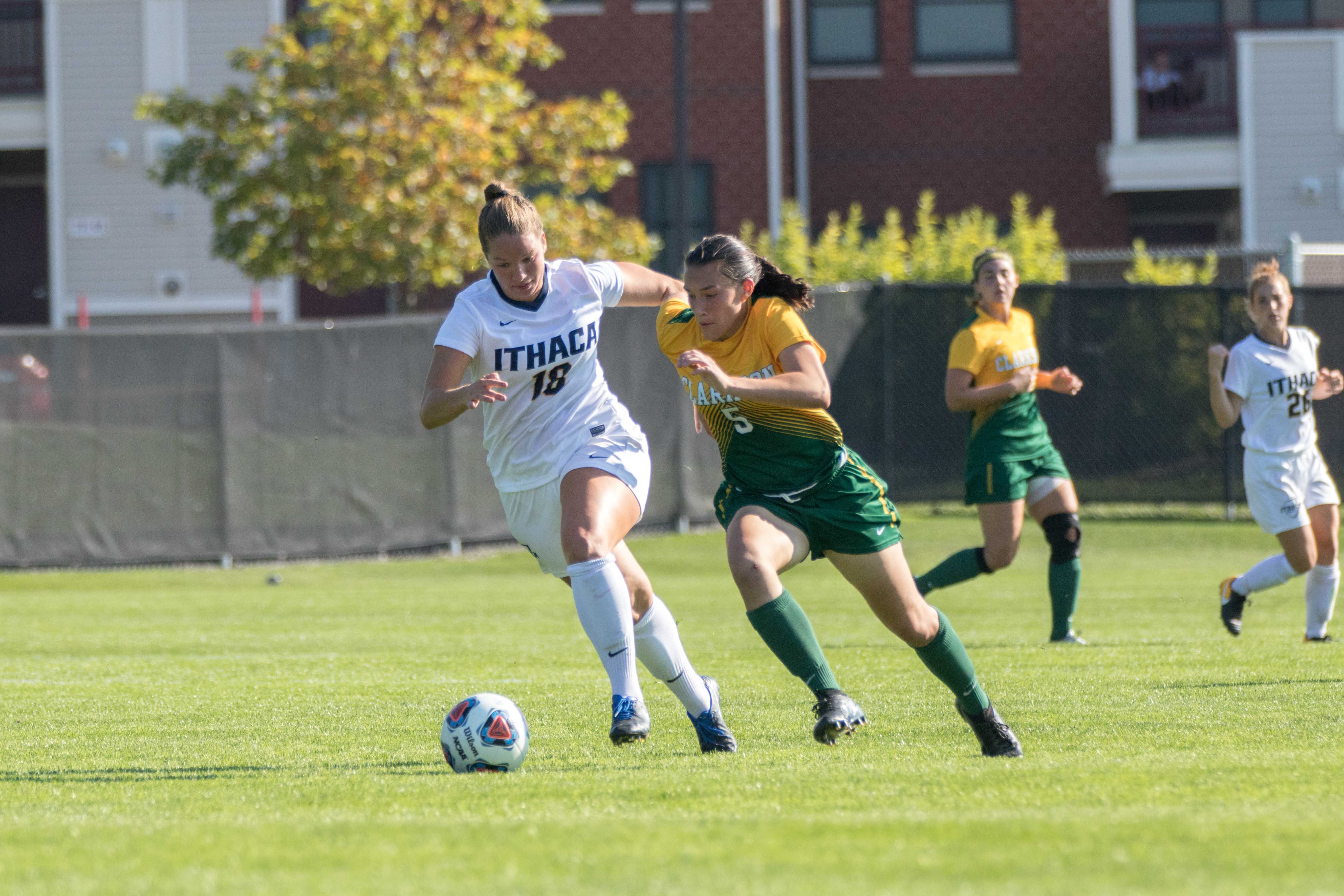 CAITIE IHRIG/THE ITHACAN
Senior defensive back Shannon McMillan and freshman defender and midfielder Ashley Abel of the Golden Nights run to get possession of the ball. The Bombers lost to the Golden Knights Sept. 23 2–1 at Carp Wood Field.
By Matt Clement — Staff Writer
Published: September 24, 2017

The Blue and Gold took on the Clarkson Golden Knights in their first Liberty League game of the season, losing  2–1 on the day. Despite the Bombers outshooting them 14–7, Clarkson was able to leave Carp Wood Field with the win.

The first half was a hard-fought 45 minutes with plenty of tough play in the midfield from both teams. The Bombers sat deep for the first part of the game in an attempt to draw the other team in and hit them on the counter-attack.

Junior midfielder Shoshana Bedrosian broke the deadlock in the 15th minute on one of these counterattacks, receiving the ball from freshman forward Alex Epifani and chipping it over the opposition’s goalkeeper. This was Bedrosian’s fifth goal in two games after bagging four goals in their 8–0 win against Wells College Sept. 16.

Following the goal, the Golden Knights held more possession than before and were able to grab the equalizer with a goal from sophomore forward Camryn Careccia with nine minutes left in the half.

In the second half, the Bombers had a flurry of chances to score starting in the 50th minute, but Clarkson charged up the field and got their second goal from senior forward Madison Kather only a few minutes after.

Although the Blue and Gold piled on the pressure in the last 15 minutes forcing a few great saves from Clarkson, the Golden Knights were able to outlast them for the win.

Head coach Mindy Quigg said she was displeased with the result after the game.

“We lost the game because of a lack of focus and not regrouping and not getting our act together quick enough,” Quigg said.

Quigg said there were some positives to take out of the game and that she was impressed with the chances the Bombers created on the day.

“We had good communication, which we’ve been working on the past couple of weeks,” said Epifani. “I think we just need to connect better in the midfield and forward positions and we’ll be set.”

The Bombers’ next game is 4 p.m. Sept. 27 at Carp Wood Field against St. John Fisher.