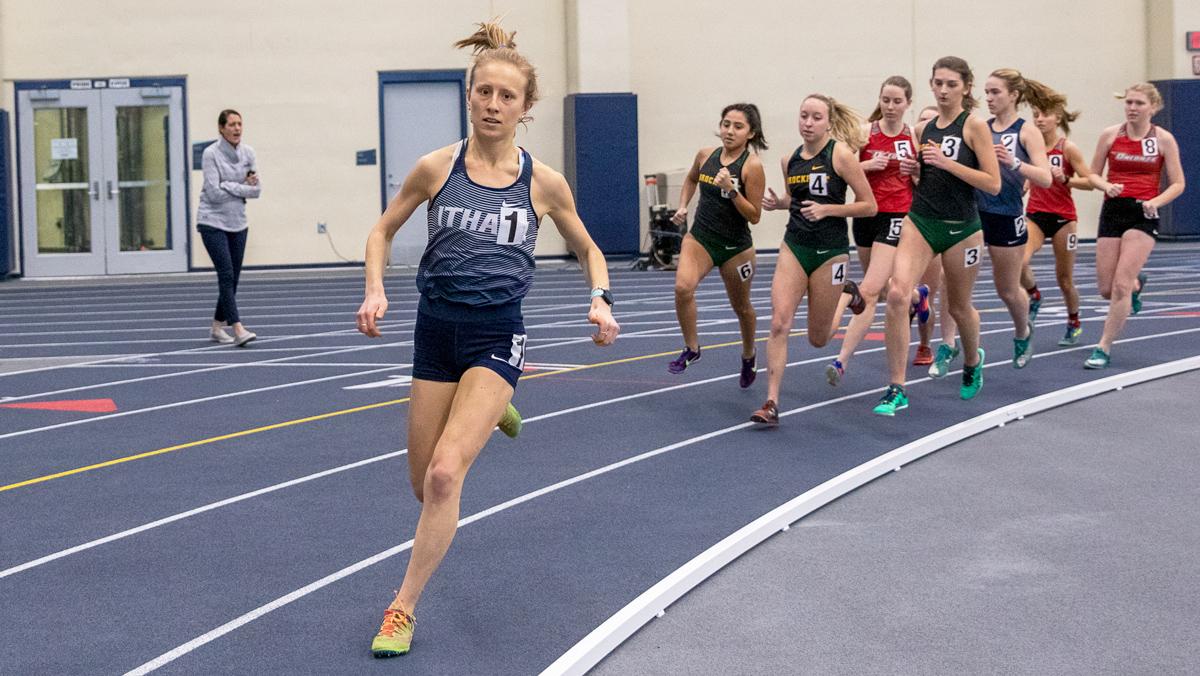 Molly Bailot/The Ithacan
Senior Parley Hannan takes the lead against her competitors in a tri-meet against The College at Brockport and SUNY Oneonta in Glazer Arena.
By Tyler Evans
Published: February 11, 2020

The Ithaca College women’s track and field team not only competes against some of the best athletes in Division III at meets and invitationals but in practice as well. The Bombers run, sprint and jump alongside their nationally ranked teammates daily.

The team, which is ranked No. 4 in Division III, currently has five athletes across eight events who are ranked in the top 10 nationally. Freshman Meghan Matheny is ranked No. 1 in the pole vault, and senior Parley Hannan is first in the nation in the 1-mile run, the 3,000-meter run and the 5,000-meter run. Freshman Tia Jones, senior Sarah Rudge and sophomore Logan Bruce are all ranked in the top 10 of their events as well.

Hannan said she has set high expectations for herself for the indoor season and plans to continue building on her early success.

Hannan’s personal-best time is 16:44.57, and the current record for the indoor 5,000 meter is 16:23.12. It was set in 2019 by Kaitlyn Mooney of the Coast Guard Academy. Mooney has not yet raced during the 2019–20 indoor track and field season, but she placed 34th at the NCAA Division III Cross-Country Championships.

“When I started running for the team, I was not logging how many miles I was running per week,” Hannan said. “When I started working with the coaches and logging my miles, I was running around 10 miles more than I should have been per week. Fixing that in my training will allow me to run even faster this season.”

Having athletes at the top of national rankings is not uncommon for the Bombers. Katherine Pitman ’18, Brandy Smith ’17 and Taryn Cordani ’18 all won multiple national championships during their time at Ithaca College.

Pitman was a two-time indoor national champion in the pole vault and currently holds both the indoor and outdoor Division III national records. Smith was a three-time outdoor national champion in the discus, and Cordani won two titles in the outdoor 10,000-meter run and one in both the indoor 3,000- and 5,000–meter races. Head coach Jennifer Potter said she credits the coaching staff with the team’s continued success.

“The coaching staff here has been together for awhile and are experienced,” Potter said. “That helps with teaching and developing our athletes so they can take it to the next level.”

Potter said she also believes the culture of the team allows the athletes to perform at their best.

“Our philosophy is ‘person first, athlete second,’” Potter said. “Our athletes understand that our motivation goes beyond track and field. We encourage our students to grow outside of the team, and that is a big factor for our success over the years.”

Matheny, who is from Lansing, New York, has trained with Scheffler for several years, and she said the successes of former Bombers motivate her.

“I knew both Kat [Pitman] and Alex [Rechen ’16],” Matheny said. “Their success in the pole vault led them to be All-Americans and leaders of the team. Seeing what they were able to accomplish makes you hungry to do the same.”

Jones will have a chance to change that this season. Jones is currently ranked fifth in the 60 meter and seventh in the 200 meter. She also broke the college’s record for the 60-meter dash in her first meet of the season Dec. 7 at the Cornell Greg Page Relays.

Potter also said she is expecting more athletes to put up high-ranking performances as the team approaches the Liberty League and All-Atlantic Region Championships.

“It is still early in the season, but we are excited with our accomplishments so far,” said Potter. “The rankings will change, and we are pushing our athletes to do better. We know we can get even more people to the top.”

Potter said that while she is pleased with the individual successes of the athletes, her goal is a team victory at the NCAA Championships. The Bombers’ highest finish at the indoor national meet was second place in 2017.

“We give everything we have,” said Potter. “Our goal is to win nationals. We do keep track of national rankings and focus on team [personal bests] as well as the Liberty League, but our team goal has always been nationals.”