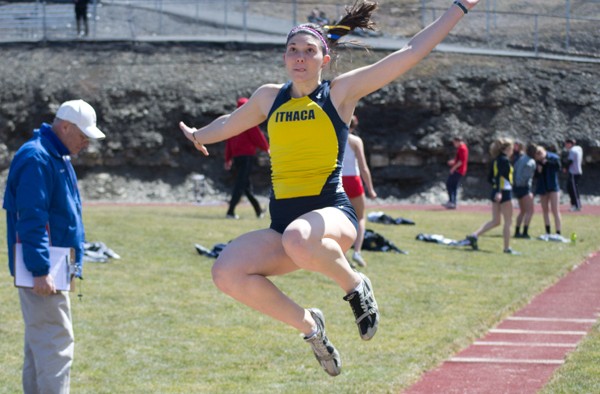 With the New York State Collegiate Track Conference Championship just around the corner, the Bombers begin their postseason physical and mental preparation to repeat their 2012-13 indoor season success.

This past weekend, the squad finished first out of seven teams for its sixth consecutive Empire 8 outdoor title. The team finished with a total of 268 points, giving the Blue and Gold seniors a perfect Empire 8 record throughout their four years in Ithaca.

Head Coach Jennifer Potter said even though it is exciting for the South Hill seniors to finish with a perfect Empire 8 record, the team is still training for the greater challenges of states and nationals.

“To go 8–0 as a group has a great meaning in and of itself, but it is still a meet that we train through and helps us prepare for the future meets coming up,” she said.

Senior co-captain Amanda Rissmeyer said the squad acknowledges the importance of early meets, and they hope to use these as training to excel in the postseason, where they will compete on the biggest stage of all.

“A lot of the time in these earlier meets, we are looking to hit marks that get us in the right heats in our individual events, so it’s about placement,” Rissmeyer said. “Once we get into the postseason, we are not competing for marks, but we’re competing to go further.”

The Blue and Gold began the series with the Empire 8 Outdoor Championship meet. In a week, the team will move on to the NYSCTC meet, where it will look to defend its title as state champions.

With another two-week block in between, the team could then advance to the Eastern College Athletic Conference Outdoor Championship and finally the NCAA Championship on May 25.

With so much left in store for the Bomber’s season, there is no time to waste when preparing. When it comes to the physical training, Potter said the key is to avoid over-exhausting their bodies prior to the postseason stretch. Sophomore Leigh Martino said the first piece to the team’s process is to begin lightening the training by decreasing distances and lowering weight lifting.

In addition to tapering off, the Bombers also practice their mental training each week before their meet. To organize itself for the meet each week, the team will sit down with Assistant Coach Jacquelyn Mendes, a graduate student with a background in sports psychology. To help prepare, they will go over routines in their heads with Mendes so they can let their bodies take over in competition.

During this stretch, the coaches add to the mental training by incorporating times to focus on schoolwork and finals. Potter said though the squad has a difficult practice schedule with the postseason in full swing, their classwork does come first.

“When we go into the last week of classes and finals, it’s really challenging, because our athletes do very well in the classroom,” she said. “We work around their [academic] schedule and commitments to make them feel calm about their schoolwork so they are not stressed.”

The final portion of their preparation for this series of meets is a positive mindset. Rissmeyer said the key for the Bombers success is keeping their confidence level at the highest-level possible and remembering why they are on the track in the first place.