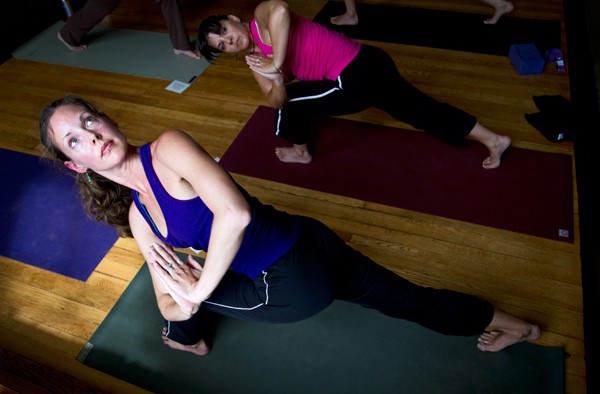 Rachel Woolf/The Ithacan
Yoga student Jenni Cunningham-Ryan, of Ithaca, completes a yoga pose during a modified primary Ashtanga series in The Yoga School Sunday afternoon. The Yoga School is located above Mate Factor in The Commons.
By Justine Chun — Staff Writer
Published: August 29, 2012
Above Maté Factor on The Commons is a small bright room with smooth hardwood floors. Large windows let light into the simple, intimate studio where yoga students slowly lift their arms above their heads and pause, breathe and focus.The Yoga School, according to the instructors, is not just the typical yoga spot to get that “hot yoga bod.” Trained instructors try to focus on opening their students’ minds, hearts and bodies.Though there are more than 10 yoga studios in Ithaca, The Yoga School sets itself apart for being one of the only spots for training instructors.

Lennessa Shantaya, director of The Yoga School, has more than 12 years of experience studying Ashtanga — more commonly called “power yoga” — which is a specific series of postures that requires constant movement. Shantaya said her calling is to work with each student, seeing his or her individual skill, as she assists them with the yoga lifestyle.

The Yoga School tries to highlight technique so that the body isn’t rushed into stretching or doing anything before it is ready. Shantaya said many think of yoga as flexible bending, but yoga is really about strength and stabilization.

Shantaya decided to open the school back in December with help from her friends, who are community yoga instructors, and her life partner, Mikey Shantaya. They wanted The Yoga School to offer a program that explored all aspects of yoga.

A spiritual seeker since she was a young girl, Shantaya decided that yoga at The Yoga School should be focused on meditation rather than just a good workout.

“I went to everyone’s church and I never found a spiritual home,” Shantaya said. “I also liked to move my body; I was a cheerleader, I was in the band, on the dance team, I was a swimmer.  Once I dropped into yoga, these deep needs in me were being fulfilled. There was endless learning potential.”

Along with instruction for yoga students, The Yoga School also offers a teacher training program. The 350-hour program runs from February to June and August to September. Student teachers also have two days of training on the weekends as well as a philosophy class.

“We’re offering something different, not just a studio but there’s the opportunity to really learn yoga here with teacher training,” Shantaya said.

“I really love my practice and I wanted to learn more,” Leonard said. “When I heard about Lennessa’s program I signed up mostly for my own education.”

Appreciative of their approach, Leonard said The Yoga School is much different from other yoga studios around Ithaca because of their intense focus on teaching technique.

“They’re very particular about alignment and how to do yoga in a way where you won’t get hurt,” she said. “It’s more about having an intelligent practice rather than the intense sweating kind.”

Alexis Gersh, a yoga student who has been attending classes at The Yoga School for more than a month, had been to many other yoga studios before trying Shantaya’s studio. Gersh said she never got the right “vibe” from other yoga studios.

“They were focusing more on getting the hot yoga body, and that’s not really what I’m into,” Gersh said. “I like how they practice breath work a lot, and I just like the style of their teaching.”

Through The Yoga School, Shantaya wants students to become connected to their bodies. This way, through yoga, people learn to take care of themselves.

“The world is stressful — there’s a lot of demands placed upon us, and if we’re not careful we become very disconnected,” Shantaya said. “It’s kind of a way of remembering to take care of ourselves so we can take care of our families, take care of our communities and be a contribution to the world.”

Located at 141 East State Street, The Yoga School’s classes run every day from 9 a.m. to 8 p.m. A list of classes offered is available on their website, yogaschoolithaca.com.