My unconventional return to college

I remember my first day on the Climate March like it was yesterday. I was dropped off at the Taos visitor’s center where I was to meet up with the Marchers, who were arriving into the city from their day’s walk. Hail was falling from an angry grey sky and the cold wind bit right through my clothes. I went inside the visitor center to take shelter while I waited.

In groups of two to five, the Marchers arrived, gathering inside out of the weather. As the inside of the center grew crowded, I found myself face to face with people I had only seen pictures of online, with people who I had been having email exchanges with for months. One by one they came up to me and introduced themselves.

“Nice to finally meet you, Faith!”

I found myself in shock at the warm welcome. Every single one of them knew exactly who I was, and expressed how delighted they were that I was finally on the March. When we eventually left the center and continued marching in the freezing rain to our rally destination in Taos, I was too caught up in getting to know my new family to care much about the weather. 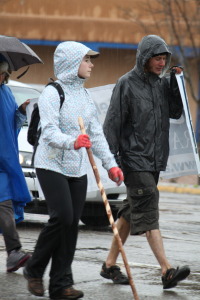 On that day, nearly 2,000 miles away from our finish line in Washington, D.C. returning to Ithaca College in the Spring felt like some far off dream, years down the road. And certainly on that day I never dreamed that just a few months later I would become a leader in a civil disobedience movement in the Finger Lakes.

But here I am, nine months, 2,000 miles and 180 Seneca Lake arrests later. Tonight I have filled the hiking backpack I got for Christmas to the brim with all the supplies and equipment I will need for a five day, 53 mile journey from my home in Geneva to my second home in Ithaca. After I finish this blog post I will go to bed and try to get a full night’s rest, because tomorrow, for the first time in a while, I will be rising with the sun to walk. 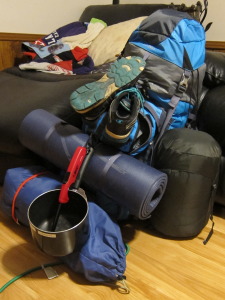 After spending 5 months walking from New Mexico to Pennsylvania, a 5 day trip to Ithaca doesn’t seem like much at first. But I expect my 53-mile endeavor will be every bit as challenging as when I was fresh on the March with two feet covered in blisters and a body being whipped into shape. On the March, there were always other people and support. Someone went ahead and by the time we arrived after a long day of walking, camp was set up. But, starting tomorrow, I’m going to be on my own, and I’ll be carrying everything on my back. No gear truck, no push cart.

Oh, and it’s January in New York. The exact opposite of July’s 100 degree days in Nebraska. I’ll be sleeping outside each night in my tent in the bitter cold with all my layers on.

My dad informed me this isn’t the best idea I’ve ever had, and I’m pretty sure my grandma thinks I’m crazy. But one of the biggest lessons I learned from walking across the country is: you’re capable of more than you think. Again and again I watched my fellow Marchers overcome immense physical challenges, and it was often when I was just about to give up that a second wind would fill my sails.

We are all capable of more than we think, and we’re going to need our full capabilities, as individuals and as a human team, to overcome the immense injustices our world is now facing: climate change, poverty, social injustice, unequal food distribution, war, animal cruelty, government corruption, extinction…

I am looking forward to my solitary adventure along the shores Seneca and Cayuga Lakes as a time to reflect on all I have experienced since the Spring 2014 semester ended, and as a time to look ahead with clear thoughts and fresh perspective. I have many accomplishments to congratulate myself for and many fears to face. And with each step I take on that 53 mile path I hope I will be able to better understand the path ahead of me.

I’ve made a map of my route from Geneva to Ithaca, which you can view here.

You’ll notice I still haven’t confirmed three of my four campsites, so if you know anyone who is open to letting a traveler pitch a tent in their yard for a night, drop me a line…

As we said on the March, “Have a good road!”