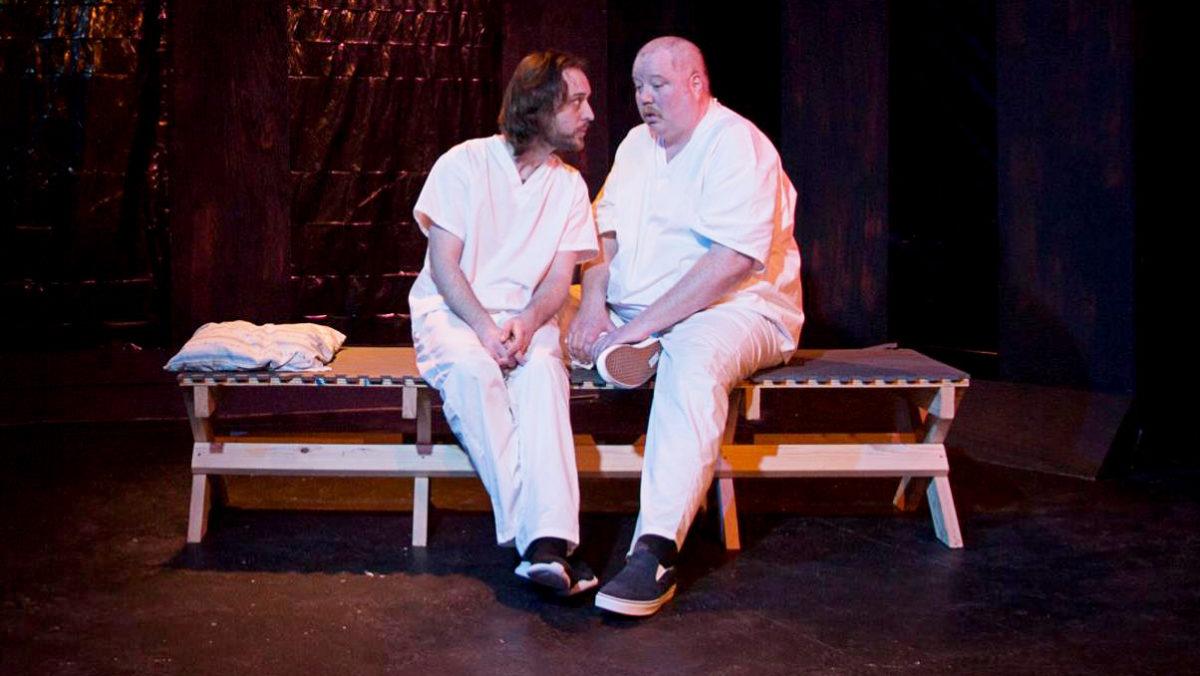 Courtesy of Wade McSurley-Bradshaw
From left, Abel McSurely-Bradshaw plays Katurian and Dan Kiely plays Michal in “The Pillowman” by Martin McDonagh. They are performing the play at the Risley Theatre at Cornell University through the end of March.
By Avery Alexander
Published: March 19, 2019

The artistic city of Ithaca has a new multimedia production house, House of Ithaqua (HOI).

The company stands out for its creepy storytelling, and it dabbles in film as well as theater. HOI introduced itself to Ithaca in fall 2018 at Risley Theatre at Cornell University with its first show, “Bug,” which focuses closely on the horrors of war and human nature. The company dedicates itself to portraying stories like this, ones that are often unheard, and tales that highlight true, bone-chilling fear. HOI is still searching for a permanent home but has been holding auditions at PhotoSynthesis Productions.

Christopher Teitelbaum founded HOI with his friends and collaborators Alek Osinski and Jeff Hodges. Teitelbaum approached Osinski and Hodges with this idea because he said he saw a need in the community for an outlet to spin these unusual, macabre tales. The house’s website said the company is dedicated to telling diverse stories that might not otherwise be told. Teitelbaum said the house is also dedicated to involving the community in productions, especially students at Ithaca College because of the school’s strong theater and film programs.

AJ Sage is the artistic director at HOI and said the group aims to work with dark material that deals with both the horror of fantasy monsters and the real world.

“Specifically our group’s mandate is to look at dark material and put it into performance spaces,” Sage said. “It’s a constant conversation of when we say ‘dark,’ what exactly do we mean? … The play we’re doing right now is more the horror of the every day or the horror of naturalism …  not of ghosts and ghouls and monsters, but people.”

Osinski said that he agreed with Teitelbaum and also felt that besides needing a place for these types of horror stories, there is also a need for a multimedia outlet that offers both theater and filmmaking in Ithaca.

“We were discussing that there’s no one outlet for making visual arts …  in town that does both where we could be a part of it,” Osinski said. “When Chris came up with the idea of starting a production company that did both theater and film, it seemed like the natural place for me to get involved.”

Osinski said the goal in creating HOI is to engage with the community and give people the chance to explore artistic expression in a new way.

“It was more a need in town for a place for us to do things and be a magnet for collaborating with the various people,” Osinski said. “Including … students who are here and just don’t have the opportunity to do things outside of the college setting.”

Teitelbaum also said he wanted to create something like HOI to give people the chance to create work outside of the colleges.

“It started as a way of getting creative projects done,” Teitelbaum said. “Saying, ‘Hey want to get together this weekend to shoot’ isn’t the most effective way to get things done.”

Sage also said HOI is dedicated to gathering the talents of students and Ithaca locals and hopes the future will bring better participation in from the community.

“Our other mandate is to collaborate with people from Cornell, IC and the great Ithaca community,” said Sage. “We aim to be as diverse as we can be along lines of race and age … What I hope for is is that we continue to see expansion in the circle of artists that know us and desire to work with us.”

Sage said HOI actively tries to avoid typecasting, a trend that is common in the  theater community. He said one of the main goals of the house is to give all actors equal opportunities to perform.

“We have open auditions for everything because we want to cast as wide a net as we can,” Sage said. “The other thing is that, so far, one thing I’ve really enjoyed is giving people who are brand new the chance to work with people who have been doing it for years and years, and vice versa, because you come across new perspectives … This is the first time I can say I’ve seen a really solid mix of experience levels.”

Now, HOI is working on its next production, “The Pillowman,” written by playwright Martin McDonagh. This play focuses on the horrific atrocities of humanity — specifically, the play follows a man who is accused of brutally murdering children and then relaying his crimes in his writing. “The Pillowman” will have shows March 14, 15, 16, 21, 22 and 23 at 7 p.m. and March 17 at 2 p.m. at Risley Theatre at Cornell University. According to Osinski, HOI is also planning to have several films and an online series go into production in the near future.

“We’re also putting together the framework for a horror film festival in Ithaca,” Teitelbaum said. “Hopefully for next year.”

HOI is in need of all types of participation, including actors, light directors, stage managers, editors and more. The company encourages students to help out because participants will be paid and the opportunities could also bulk up student’s resumes. If students are interested in helping with HOI projects in any way, they can reach out to HOI at its official Facebook page, House of Ithaqua; its website, houseofithaqua.com; or its email thehouseofithaqua@gmail.com.