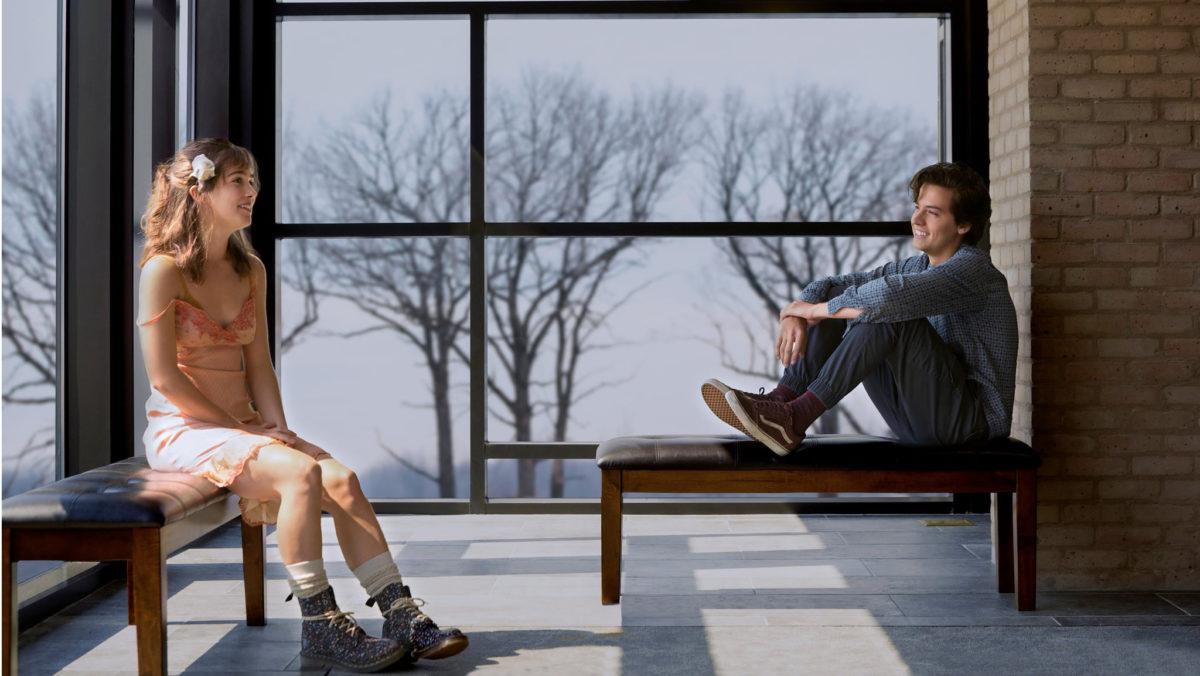 CBS Films
"Five Feet Apart" is another movie in the trend of tragic teen romance. The movie features two teens who suffer from cystic fibrosis and depicts a genuinely heartbreaking story. Despite being one in a genre of many, "Five Feet Apart" stands out for its depiction of its characters and their relationships.
By Olivia Riggio
Published: March 27, 2019

The latest brand of young adult romance seems to revel in the bittersweet tragedy of chronically ill teens falling passionately in love.

Five years ago, the adaptation of John Green’s “The Fault in Our Stars” gained incredible success. America seems to love watching manic pixie dream girls and brooding bad boys share tragic romances. “Five Feet Apart” is no exception to this trope of precocious teens falling hopelessly in love, but the emotions it evokes are truly raw and beautiful.

“Five Feet Apart” is a story about two teens with cystic fibrosis, a chronic illness that causes mucus, sweat and digestive juices to become thick and plug up lungs and passageways. Stella (Haley Lu Richardson) is a perky, bright and tidy 17-year-old who vlogs about her condition that leaves her hospital-bound for long periods. Will (Cole Sprouse) is an angsty, mysterious new resident taking part in a drug trial. They meet while Stella is admiring infants in the neonatal intensive care unit. Stella rejects Will’s initial attempts at flirting, but the chemistry is there from the get-go before it progresses into sweet, young love and then into passion. The catch? Two people with cystic fibrosis are unable to be closer than 6 feet away from each other because of the risk of spreading life-threatening bacteria.

As Stella and Will grow closer, the sexual tension builds. Both Richardson and Sprouse show their characters’ guarded attractions morph into passion beautifully. Sprouse shows Will that he is growing from the aloof bad boy to a sensitive and sweet lover, and Richardson brings Stella to life, first portraying her as cautious and controlled, then allowing her to break her own emotional dams and unleash the depth of her feelings.

It is almost torturous to watch these young lovers not even be able to kiss. In a YouTube video, Stella reveals a clever and symbolic plan: She finds a pool cue — approximately 5 feet long — and uses it to measure her space from Will. She decides that although cystic fibrosis patients are not supposed to be within 6 feet of each other, she and Will will push their luck and bypass the last foot. With wisdom and zest for life slightly too mature to be believable for a 17-year-old, Stella declares she will steal 1 foot away from cystic fibrosis, as cystic fibrosis has stolen so many opportunities from her. Here, the concept of the film comes together sweetly and heartbreakingly.

Scenes of Will and Stella sneaking playfully through hospital hallways holding either side of the pool cue are tragically adorable. The overall cinematography is stark and gorgeous. With sterile, clinical tones of blues and grays painting most of the scenes, the filmmakers express the desolation these teens are forced to live with and their attempts to add color and warmth to their lives through clandestine candlelit parties and sketches pinned to walls. Wide shots of Will and Stella standing 5 feet apart from each other are subtle but bursting with emotion.

One of the most beautiful scenes occurs after Will and Stella sneak into the hospital’s pool. As they sit with their feet dangling in the water, pool cue between them, they express their desire to touch. Stella begins to seductively undress, revealing her torso, marked with tubes and scars. Will does the same before the two playfully jump into the water. This scene shows their youthfulness, but also the struggle of being deprived of the ability to explore their sexualities as young adults. It shows budding sexual tension swell and break in a captivatingly pure way. The emotion in this scene is palpable and evokes sympathy for these young lovers.

The film is rife with one tragedy after another, but for people who live with a condition that likely will not allow them to live past 30, it is not necessarily an exaggeration to highlight the uncertainty and fear these teens grapple with. Despite the film’s multiple layers of heart-wrenching elements, it also manages to capture the sassy, rebellious humor all teens can relate to.

Stella’s best friend, Poe (Moises Arias), is also a hospital resident with cystic fibrosis. His cheeky wittiness and loving friendship with Stella adds heartwarming levity to the film. He is also gay, and the filmmakers showcase his desire for and his struggles with love without tokenizing his identity.

People in the cystic fibrosis community have lauded “Five Feet Apart” for its accurate portrayal of the medical practices and procedures patients have to deal with. The film does not spare phlegmy coughs or infected feeding tubes, but critics have also condemned it for romanticizing the illness with sanguine tragedy.

Though “Five Feet Apart” falls victim to the cliches of many other young adult love stories — brooding bad boys, impossible love and way-too-profound and poetic lines to be coming out of the mouths of high schoolers — it is successful in evoking deep, real emotions.