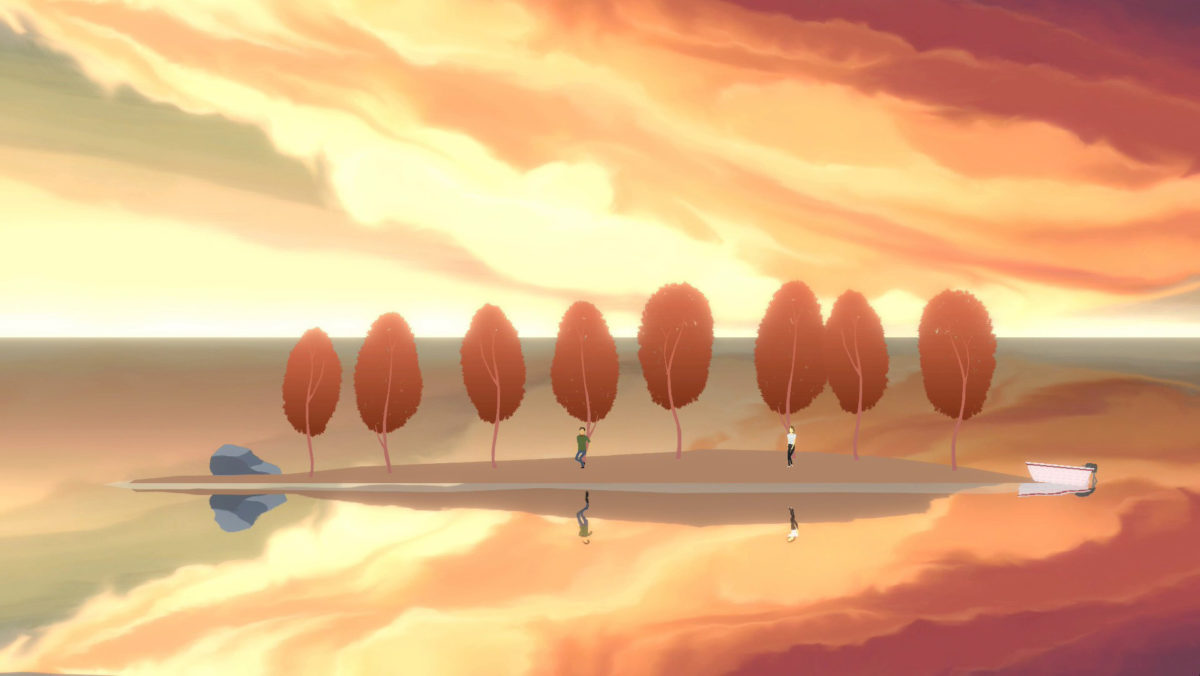 Frostwood Interactive
"Rainswept" is full of breathtaking art and music, but the game lacks character building and plot. The game also suffers from a plethora of glitches and errors that interrupt the immersive experience.
By Avery Alexander
Published: February 20, 2019

A rich landscape of beautiful, rolling hills is quickly followed by the silhouette of a man in his window — then a heart-stopping bang leads to peaceful silence. This is the beginning of “Rainswept,” an indie detective game that leaves the gate with a promising start, but ends up fumbling before it can reach the finish line.

Michael Stone, a detective from the big city, rolls into the town of Pineview, where a speculated murder-suicide took place the previous night. A man named Chris is dead with a gunshot to the head, and his lover, Diane, is lifeless after having been shot in the stomach. Michael is unconvinced that the crime that took place was a murder-suicide and firmly believes that both Chris and Diane were killed by someone else.

The early plot is fine — nothing is particularly special or different about it right off the bat. The game prompts players to have Michael sniff around at the crime scene. In comparison with other detective–mystery media, the investigation seems like it is going to be a rather bland one, as everything Michael discovers in Chris and Diane’s home is as mundane and boring as possible. However, this is all a set up to lull the player into believing that nothing is out of the ordinary. After Michael combs the home for clues, discovering very little information, he heads out to check into his hotel room in town. During a scene of the drive into town, Michael suddenly hallucinates an apparition of his dead wife, Abigail, in the middle of the road and gets into a mild accident in his surprise.

This unexpected peek into Michael’s backstory opens the player up to the possibility that something deeper than a standard investigation is underway. The apparition gives the player a new mystery to unravel — what trauma lies in Michael’s past and why is it now coming back to haunt him?

The detective eventually makes it into town, moving on from his incident rather quickly. He wanders around town, questioning seemingly everything that breathes. Thanks to this, the player gets to meet a slew of side characters. This would be great if those characters that the player spends so much time meeting actually mattered. Throughout the game, the story desperately tries to make all of the Pineview residents relevant to the plot. In this attempt to have the player build a connection to the town and its people, everything becomes a little worse for wear.

Once the game moves past this bland introduction period, things really start heating up. The true plot focuses closely on Michael’s mental state and makes poignant commentary about grief, guilt and relationships. It is honestly better to ignore the actual investigation going on and just sit back, relax and enjoy the vivid, symbolic ways in which the game portrays Michael’s spiral into depression and hopelessness. The part where Michael saw a vision in the street was only the beginning, and it opens up the game to it’s more abstractly stunning side. The game explores these abstract concepts that deal with survivors guilt, depression and suicide mostly through Michael’s own dreams. Within his mind, Michael finds himself lost in various mazes that replicate the day Abigail died. These scenes dig deeper into Michael’s internal struggle in the most beautiful, symbolic way possible with vivid symbolism and hazy colors.

The art is by far the most notable part of this game, and it brings so much to the experience. The characters and setting are 2D and abstract, made of hard shapes without defined lines. The skies are also painted in watercolor, bringing the scenery to life. The 2D design can feel limiting for character movements, but the way it builds the setting is absolutely worth it. Within Chris and Diane’s backstory, there is a moment where the two take a boat out on a lake. The scene is brilliant and otherworldly, once again assisted by the unique style. The occasional close–up shots of the characters are also amazing, as the style becomes incredibly detailed, bringing vitality to the characters.

“Rainswept” also boasts a robust and hauntingly beautiful soundtrack. The morbid circumstances surrounding the game’s story are juxtaposed with the pleasant sound of soothing strings and piano. The instrumentals change depending on where the player is in the game, ranging from swelling orchestral compositions to glittery, serene sonatas.

All this aside, there is one major issue with “Rainswept.” The game has so many glitches. It’s a newer game created by a small business, but it’s amazing how many game-breaking problems one can stumble upon during a playthrough. Randomly, necessary actions for the progression of the story just don’t work, or the character will get stuck, unable to exit a conversation. Each time this happens, it’s easy to reach out to the creator, Armaan Sandhu, who is very quick to help anyone with problems. Still, it’s upsetting to be sucked into a story of life and love, just to be interrupted by an unfortunate programming error.

“Rainswept” is a game that, at first, hides its true meaning behind the guise of a standard archetype. Although the hidden message, art and visuals are effective, stunning and deeply moving, the game falls short when it comes to offering true complexity. Dialogue tends to drone on, and characters lack a necessary relatability, and these issues produce a rather dull product at times. Along with the staggering amount of errors and glitches, these factors make it hard for the player to be totally swept away.