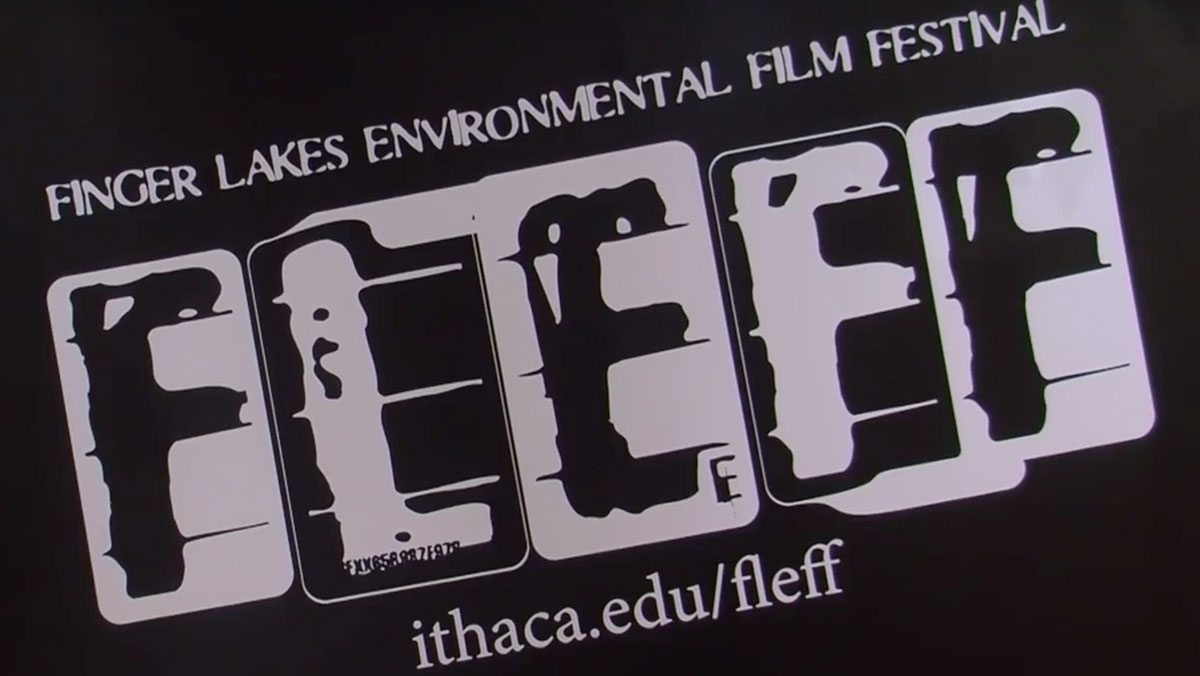 Luke Harbur/The Ithacan
FLEFF is a local annual film festival and has been sponsored by Ithaca College since 2004. The theme of this year’s festival, which runs from March 28 to April 3, will be landscapes, which the FLEFF website describes as potentially being “material and immaterial, built and imagined.”
By Faith Meckley — News Editor
Published: March 27, 2016

FLEFF is a local annual film festival and has been sponsored by Ithaca College since 2004. The theme of this year’s festival, which runs from March 28 to April 3, will be landscapes, which the FLEFF website describes as potentially being “material and immaterial, built and imagined.” Tom Shevory, co-director of FLEFF and professor in the Department of Politics, said all of the films do not necessarily fit the “landscapes” theme but that the theme will provide a framing for post-screening discussions.

Before 2004, FLEFF was hosted by Cornell University with a smaller number of screenings. Shevory said the festival was able to blossom with monetary support from the college and a partnership with Cinemapolis. The partnership also brought more support for Cinemapolis, which Shevory said was struggling financially at the time.

Sophomore Gabriella LoBue is an intern at this year’s festival and is responsible for blogging about the upcoming films and presentations. She said FLEFF is an event that can bring people together from across the community, regardless of their academic interests.

“What’s really cool about film festivals is that they bring the opportunity to see films you wouldn’t normally get to see — films from Pakistan and China,” LoBue said. “It’s a unique opportunity to get together with everyone.”

FLEFF will include a concert, after–parties, six mini courses and more than 70 film screenings. Films are shown both on campus and downtown at Cinemapolis. Films on campus are free to the public, while passes for five films at Cinemapolis can be bought for $40 for the general public and $20 for students. Admission to individual movies is $8 each before 6 p.m. and $9 for students after 6 p.m.

Guest speaker Kathleen Mulligan, associate professor in the Department of Theatre Arts, is looking to generate discussion around the film “Dagh Dagh Ujala: Voices of a Stained Dawn,” which focuses on her 2015 sabbatical project, “Voices of Partition.” Mulligan spent her sabbatical in Pakistan working with Theatre Wallay in Islamabad to create an original production based on interviews with over 50 survivors of the partition between India and Pakistan. The partition was the largest mass migration in human history, resulting in over a million deaths, but Mulligan said the American public is generally unaware of this historic event.

“I hope that it will spark some interest in learning more about partition and what happened during that time, and frankly, there’s a lot of anti-Islamic sentiment in the U.S. right now,” Mulligan said. “I hope that maybe by watching this film … it will become clear that people all over the world are pretty much the same. We all really want the same things.”

Mulligan said part of her inspiration for working on the theater project was realizing that the remaining survivors of the partition are in their 80s and 90s, and if their stories were not captured now, they would soon be gone forever.

“Dagh Dagh Ujala” will be showing at noon April 2 at Cinemapolis.

Shevory said the film “Panomundo: A Steelpan Journey Around the World” will have its world premier at FLEFF. Showing at 4:05 p.m. April 3 at Cinemapolis, the film explores the history of steelpan music in two parts: The first part focuses on the instruments’ evolution in Trinidad and Tobago, and the second focuses on the music’s worldwide spread.

Shevory said a film he is looking forward to is a silent film from 1924 called “The Epic of Everest,” which records the fatal Everest expedition of famous climbers George Mallory and Andrew Irvine, both of whom disappeared during the climb. It has never been proven whether or not the two reached the summit before they perished. If they did, they would have claimed the first ascent of Mount Everest. “The Epic of Everest” has been restored, and at its 7 p.m. April 2 showing at Cinemapolis, the Cloud Chamber Orchestra will accompany the film with live music.

Shevory said he thinks one of the most important parts of FLEFF is the discussions that take place after screenings.

“We can provide a venue for people to engage in serious discussions about important issues,” Shevory said. “I think we have been relatively successful in doing that.”

LoBue said she is looking forward to attending the kickoff concert, which she said is a central event to FLEFF even though it doesn’t include any films. The concert, “Landscapes, Celestial and Terrestrial,” will be held at 8:15 p.m. March 29 in the Hockett Recital Hall.

Shevory has been a part of FLEFF since the college began sponsoring it and said he has watched the audience build over the years and the benefits it has brought to Cinemapolis.

“FLEFF isn’t just a reflection of our idiosyncratic ideas of what a film festival should be, but it’s something that will serve the interests of the community,” Shevory said.