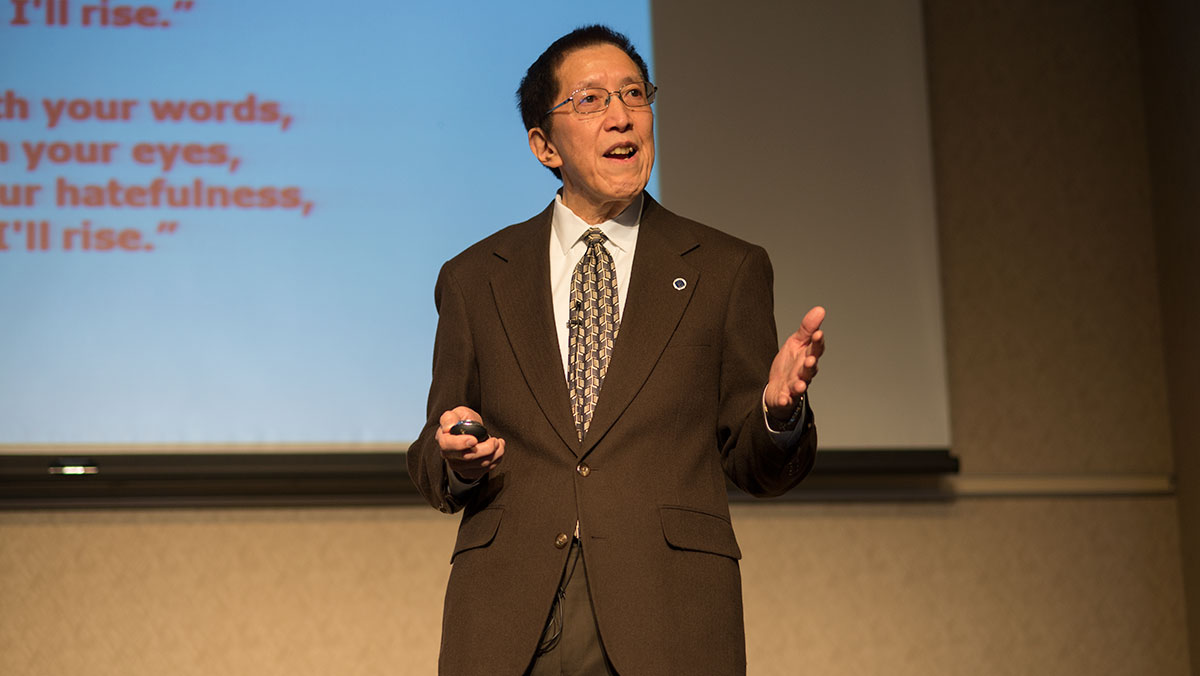 Standing under the bright lights onstage in Emerson Suites, Derald Wing Sue, professor of psychology and education at Teachers College, Columbia University, recalled to an audience of 200 one of the most common microaggressions he experiences as an Asian-American man. Sue described how many people have remarked to him that he speaks excellent English, simply because of his appearance.

“That’s good because I was born here!” Sue said in response to the microaggressors, enticing a laugh from the crowd during his speech.

Sue presented on the topic of microaggressions and their occurrence in higher education as the keynote speaker at the college’s seventh annual Engaging Communities Luncheon March 8.

The annual luncheon and Q&A session, which “explores and celebrates the notion of community and diversity,” according to the Intercom invitation, took place from 11:30 a.m. to 2 p.m. in Emerson Suites, receiving positive feedback from those who were present.

“Microaggressions are the toxic rain on campus climates that are invisible to many white people who are on the campus,” Sue said. “While they feel affirmed and validated on the college campus, students and faculty of color may experience it quite differently as hostile.”

“What’s most important is for people to get a good grasp of what microaggressions are, how to identify them and then how to thwart that behavior,” Rios-Dominguez said.

During his presentation, Sue defined microaggressions as commonplace daily verbal, behavioral or environmental indignities … which communicate hostile, derogatory or negative slights, invalidations, or insults to an individual or group because of their marginalized status in society.”

Roger Richardson, associate provost for diversity, inclusion and engagement and interim chief diversity officer, spoke at the beginning of the presentation, saying the issues that were discussed in Sue’s speech were “opportunities to learn and grow together” as a college.

The Student Government Association has acknowledged microaggressions at the college in the past: during a task force meeting in April 2014 and when a bill was passed to create a system to report microaggressions anonymously online in 2015. During the Fall 2015 semester, the group POC at IC also mentioned a history of microaggressions faced on campus during the Nov. 11, 2015, “die-in” protest.

Attendees included guests, faculty members and staff members, as well as approximately 20 students. The students who attended left before the Q&A began and were not able to provide comment. One of the attendees was Nia Nunn, assistant professor in the Department of Education. Nunn said she was excited for the opportunity to talk about diversity and microaggressions on campus.

“Too often, those who bring these issues up are shut down or perceived to be oversensitive,” Nunn said.

Sue is a prominent member of and has held several positions in the American Psychological Association.

Rios-Dominguez described Sue as “a pioneer” in the field of psychology of racism-antiracism.”

In conclusion, Sue said, he could sum up his presentation with one message about the impact of microaggressions.

“Making the invisible visible is all-important in working with microaggressions,” he said. “The well-intentioned individual is unaware that they are …saying things that are offensive or oppressive to people who are marginalized in society.