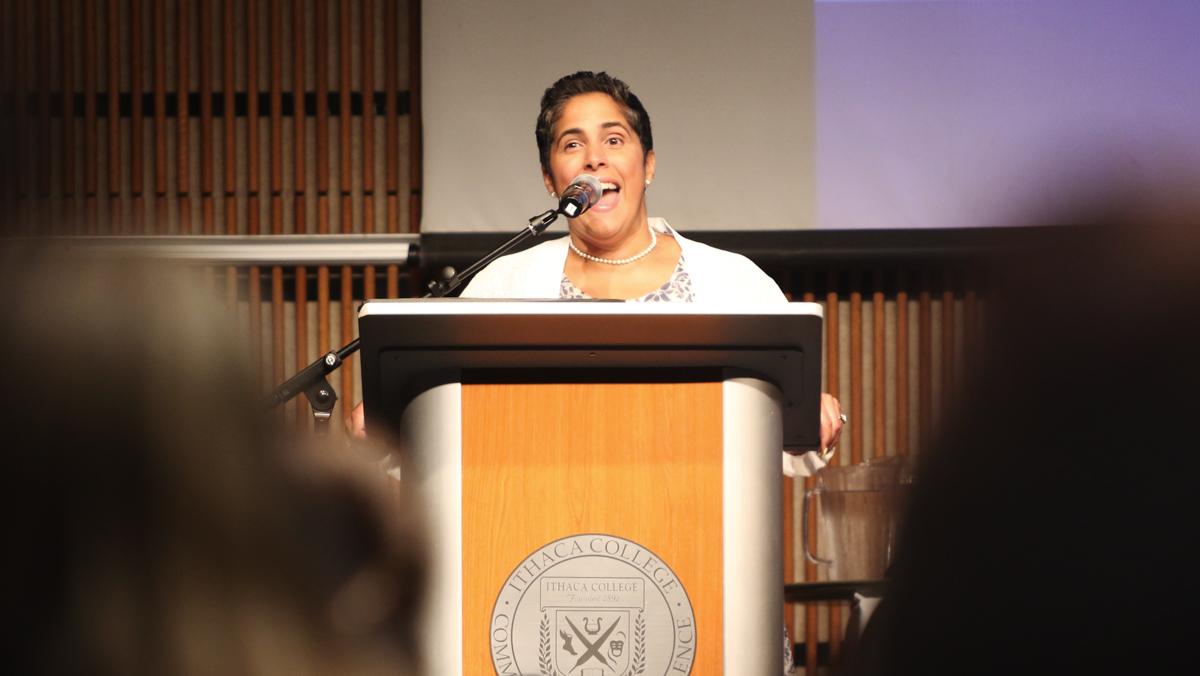 Ithaca College President Shirley M. Collado discussed the strategic plan and the financial health of the college at the All-College Gathering on Aug. 29 in the Emerson Suites.

More than 200 people attended the meeting, the majority of which were faculty and staff. Collado acknowledged that members of the campus community may be concerned about the state of finances at the college. Last year, the college announced budget cuts due to projected lower enrollment. However, she said the college has a higher operating margin this year compared to last year.

“These numbers do not tell us everything’s fine,” Collado said. “What they tell us, actually, is right now, at this point in history, we’re holding our own while balancing the sense of urgency that the higher-education landscape, which we hear about on a regular basis, is constantly redefining.”

Collado also encouraged the campus community to continue engaging with the five-year strategic plan, which focuses on implementing the goals and objectives outlined in Imagining Ithaca. She said the first forum for the plan will be held during the noon hour Sep. 3 in Textor 102.

“Your participation in this is a key part of the planning process, and it’ll take all of our energy and work and vision to get this done,” she said.

The majority of the college’s expenses — 61%, or about $155.1 million — are from expenditures related to employees, including salaries, wages and benefits. He also said the college’s 2018–19 expenses include $137.6 million in financial aid.

He said it is important for there to be resources in order to implement the strategic plan.

“That’s what a budget is,” he said. “A budget is taking a strat plan and translating that into numbers.”

Koehler said that like other small and mid-sized colleges in the Northeast, the college is not immune to the challenges of enrollment. The number of high school students graduating in the Northeast is projected to decrease over the next 10 years, according to the Western Interstate Commission on Higher Education. Koehler — who began in the position Aug. 7 — said her goal is to recruit a more diverse and talented student body by using data to innovate the college’s recruitment strategies. She said she intends to have a student-centered and holistic approach to enrollment.