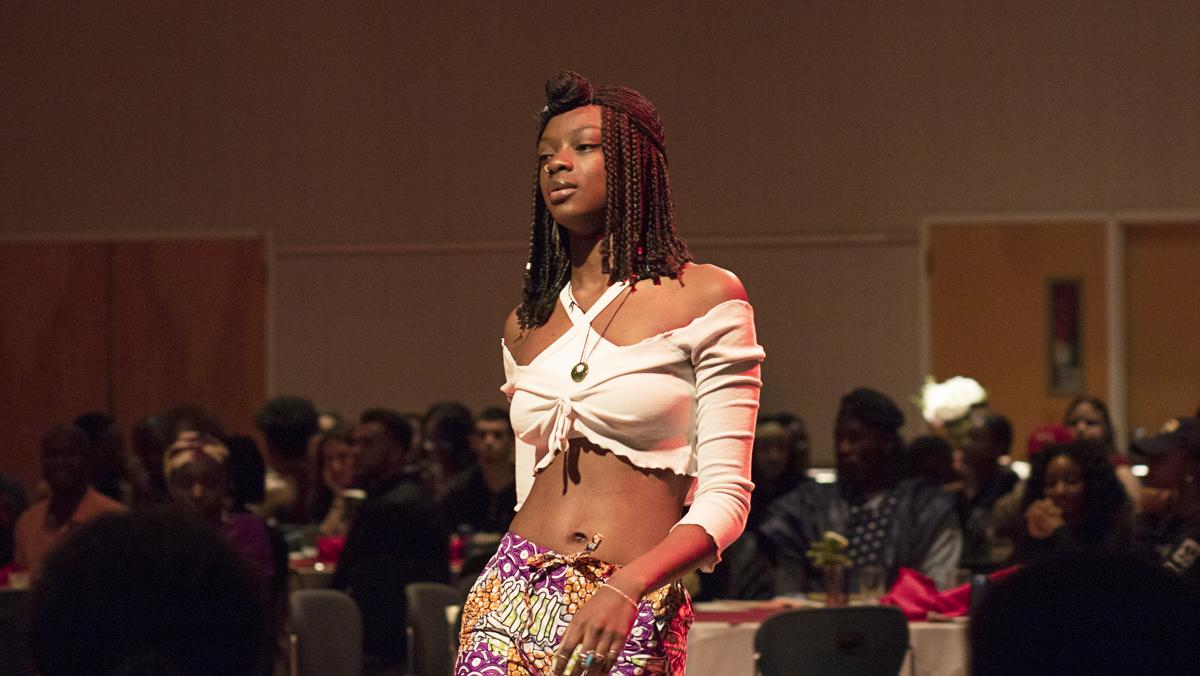 Qiuyang Chen/The Ithacan
Sophomore Sharifa Abukari participates in a fashion show that the African Students Association held April 20 as part of its Africa Week festivities. The event also included a banquet with African food, student performances and a guest speaker.
By The Ithacan
Published: April 23, 2019

Hongwei Guan, associate professor in the Department of Health Promotion and Physical Education at Ithaca College, delivered a keynote presentation for the International Chinese Society for Physical Activities and Health (ICSPAH) 2019 Symposium at the Society of Health and Physical Educators conference, held from April 9 to 13 in Tampa, Florida.

The title of his presentation was “Snow Sports Safety: What China Can Learn from the US.” Guan also coordinated the ICSPAH International Leadership Forum.

The research of two Ithaca College biology students, seniors Rebecca Falconer and Chris Gallego Lazo — undergraduate researchers in a lab taught by Andrew Smith, professor in the Department of Biology — was highlighted in articles from Science Daily and EurekAlert. The articles summarized their work, which characterizes the structure and mechanics of a remarkable natural glue that is produced as a defensive secretion by one species of terrestrial slug. Their work attempts to understand how the glue gains its remarkable sticking power and toughness.

This information can be used to guide the development of novel medical adhesives and could lead to suture alternatives that are flexible and strong.

The Campus Life Award is given each year to a select group of graduating seniors  to recognize their outstanding contributions to the Ithaca College community through participation and involvement in campus life.

In order to be nominated for this prestigious award, students must have been extensively involved in a number of areas of campus life and have demonstrated significant leadership abilities
and accomplishments.

The Campus Life Awards Committee met and selected the recipients of the 2018–19 Campus Life Awards. There are 10 graduating seniors who have made significant contributions to the college community and will be honored this year. The 2019 Campus Life Awards recipients are seniors Christian Brand, Kayla Brathwaite, Unagh Frank, Anna Gardner, Alyse Harris, Leticia Lynch, Madeleine Keppel, Carlie McClinsey, Jenna Mortenson and Avery Santiago.

In addition to Garrison’s session, Michael Malpass, professor in the Department of Anthropology, presented a paper at the event. Malpass discussed a research report entitled “Archaeological Indicators of Cultural Affiliation: The Case of the Middle Horizon Site of Sonay, Peru.”