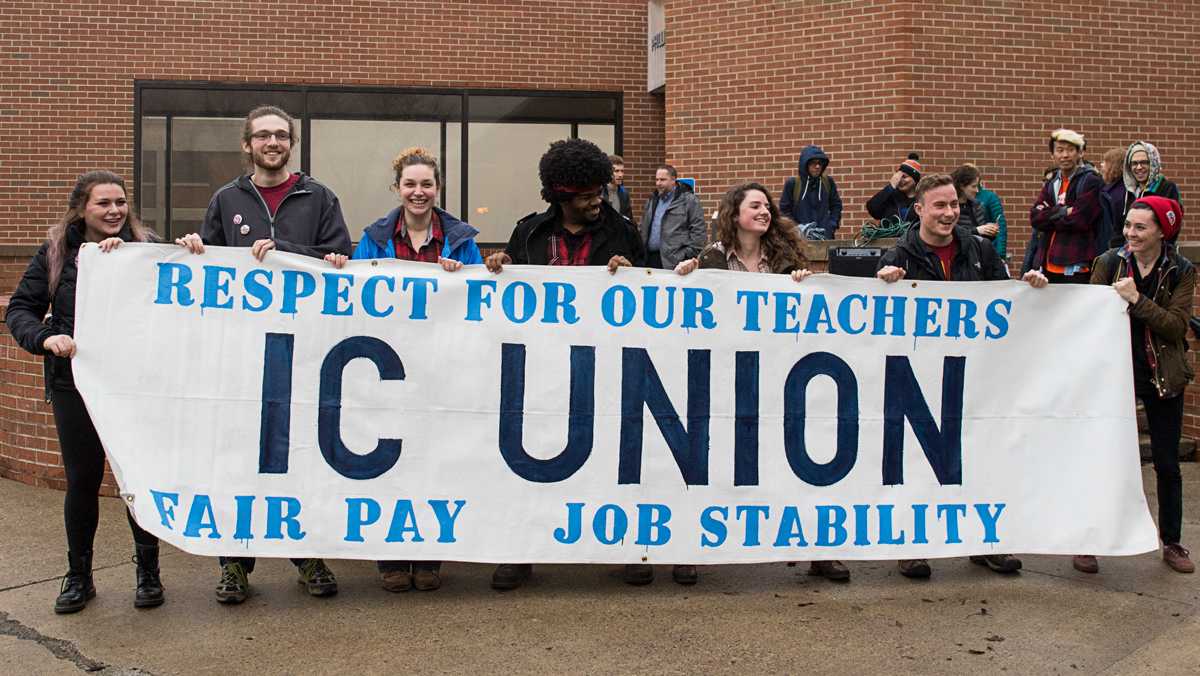 File Photo/The Ithacan
The union is pushing for increased aid and benefits for contingent faculty members who have been impacted by the COVID-19 pandemic or were terminated as a result of the APP.
By Alexis Manore — News Editor
Published: April 29, 2021

The Ithaca College Contingent Faculty Union begins negotiations for its second contract April 29 because the current collective bargaining agreement is set to expire May 31.

The current collective bargaining agreement was going to expire in May 2020, but because of the COVID-19 pandemic, the administration agreed to extend it to the next year, said James Miranda, lecturer in the Department of Writing and chair of the Contingent Faculty Union. However, the COVID-19 pandemic and the Academic Program Prioritization (APP) has resulted in the union rethinking the types of protections that union members need. The union is now pushing for increased aid and benefits for contingent faculty members who have been impacted by the COVID-19 pandemic or were terminated as a result of the APP. Miranda said the union had an informal meeting with the administration April 23, but bargaining officially begins April 29.

The union and administration are working to develop a new contract that builds on the current contract, and the union has added a number of memorandums of understanding (MOUs) to the collective bargaining agreement. These include the extension of access to Netpass and the Ithaca College Library for 18 months for terminated faculty members, support for terminated faculty members who are at risk of losing their visas, a paid sick leave agreement, helping facilitate unemployment insurance claims and expanding the Dissertation Diversity Fellowship program, Miranda said.

“That’s something the departments want because they’re not psyched that they’re losing colleagues that they have worked with for a long time,” he said. “It should be attractive to the administration because they don’t have to do expensive searches to fill those positions because they already have a waiting pool of applicants.”

Miranda said guaranteed recall, along with the structural yet limited nature of the MOU, would provide peace of mind for terminated faculty members. He said that it would give them the possibility that they could return to the college but that he knows that the administration is concerned that it could send the wrong impression when the college cannot make any guarantees.

“Having the administration be willing to do the right thing for people who have really put a lot of dedication into this place for a long time and acknowledge the fact that there are resources and benefits they can offer to some of those people at low costs to the college, if any, It would be a way of restoring some sort of goodwill in a relationship between administration and faculty that has gotten tense over the last 10 months,” Miranda said.

The APP has resulted in contingent faculty members losing their jobs because the process was conducted in line with Section 4.9.8 of the Ithaca College Policy Manual, which states that terminations resulting from the discontinuation of a program will be done in the order of part-time per-course faculty, adjunct faculty, faculty employed by term appointments, non-tenure-track faculty, tenure-eligible faculty and tenured faculty.

Mark Baustian, retired professor in the Department of Biology, former steward for the union and current member of the union bargaining committee, was involved in negotiations for the first contract and is knowledgeable about the bargaining experience. The union first ratified its contract in April 2017, after 17 months of negotiations, rallies and a threat of a strike.

He said that when the union first began negotiations for its original contract, it aimed to address issues of job security and low pay. He said the union made some progress with this, but with the college’s current financial situation, furthering this will be a challenge.

He said a focus is to bring part-time faculty pay closer to parity compared to their full-time counterparts based on the amount of work they do.

“We want people to feel confident that they can make an investment in Ithaca College in terms of their time and intellectual fire power and whatnot,” Baustian said.

Baustian said that during his time as steward of the union, he dealt with issues that arose surrounding the contract and issues with implementing the contract. He said there were sections that were ambiguous and the union did face issues with the college maintaining contract security.

“There’s some unfinished business in the original contract, bits of language here and there, how grievances are filed, how evaluations are done, the issue of how in these times we’re going to handle compensation and job security for the union,” he said. “It’s mainly to just continue the problems of contingency of poor pay and job insecurity.”

Miranda said that he hopes the bargaining does not take as long as the negotiations for the first contract but that there are issues that need to be addressed.

“There are things that have been very problematic, on our side and on the administration’s side,” he said. “You don’t know how those things are going to play out in real life, especially when things get as complicated as they are now.”

Emily Rockett, college counsel and representative of the bargaining committee, said the college is committed to negotiating with the union in good faith.

“We look forward to a productive and respectful bargaining process,” Rockett said via email.

Miranda said the union and administration will work through some aspects of the contract that have not worked and come up with an agreement that both groups can live with.

“I’m not sure that’s going to play out,” Miranda said. “I’m hopeful because we seem to have a decent rapport and seem to be hearing each other, … but also from my vantage point as chair of the union, I really want to put protections in place for people who are going to be here even long after I’m gone. … I want members to be protected, and I’d like to build toward the gains that the people who came before me were working for.”