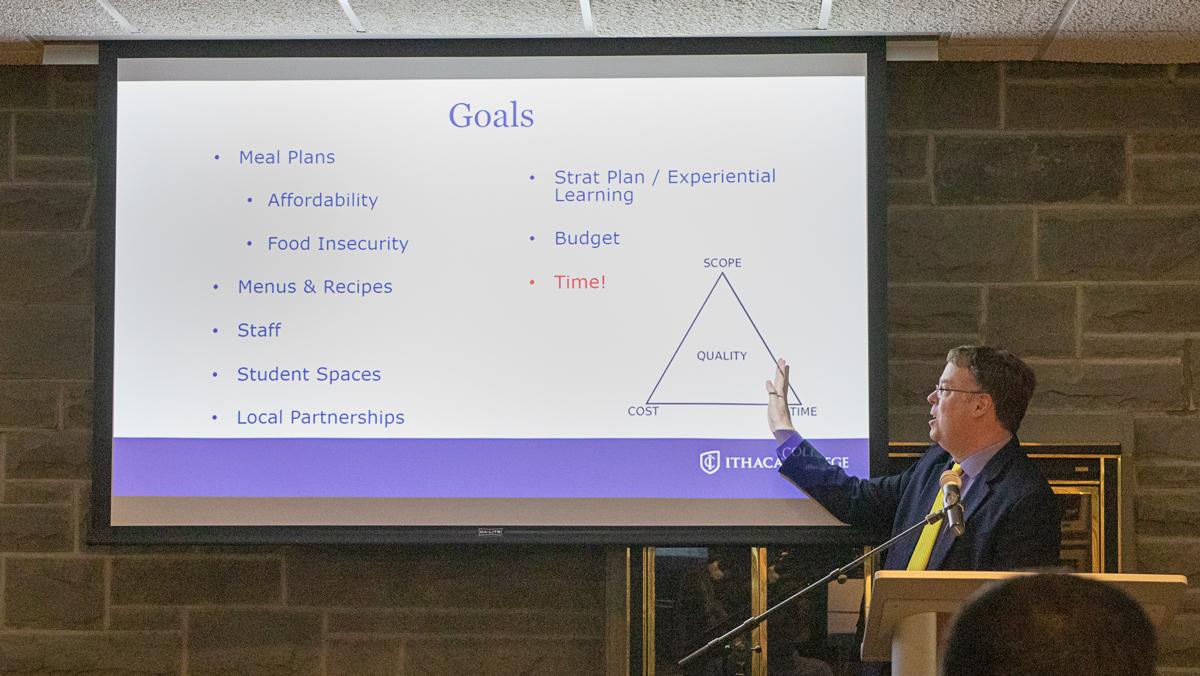 Four students attended an open forum to offer feedback about the change in meal service providers, which was hosted by Ithaca College Dining Services on Oct. 15. The college started its own dining program in August 2019 after dropping its long-term food provider, and student reactions have been mixed.

The college announced it was cutting ties with long-time food provider Sodexo in March 2019, after receiving complaints from the campus community. The college had three months to put together a new dining system.

Dave Prunty, executive director of auxiliary services, said he was not sure that holding the forum before fall break was a good idea because of low attendance. At the forum, students questioned quality assurance and the lack of vegan and vegetarian options.

While some students agree the food is improving, long lines and the closing of Towers Dining Hall and Late Night at Terrace Dining Hall sparked critiques from students.

Junior Eden Strachan asked why there are differences in the food quality in the dining halls and in the retail markets if both are cooked on the same campus.

“In some cases, I’ve seen undercooked meat, and then at Towers or any other retail place, I’ve never had that experience,” she said. “That’s a major problem, and that’s why a lot of my friends only have like two dollars left in Bonus Bucks, and we’re in October.”

Prunty said quality assurance is harder in the dining halls because so much food is being cooked at one time.

Sophomore Brigita Przybylski said she is upset by the insufficient amount of vegan food in Towers Marketplace. Prunty said the college is figuring out what students want and hopes to add healthy options like soups and salads.

“As a vegan, I haven’t really found many options other than ordering an Impossible Burger, and, while it’s great, I would also like to have a healthier option that I could get at Towers,” she said.

A concern among students in general is long lines at Terrace and the Campus Center dining halls, specifically during lunch and dinner hours.

Since opening for the semester, the Terraces line has repeatedly extended to the salad bar, with approximately 30 students waiting in line. At the Campus Center Dining Hall, students have to wait outside the dining hall to avoid filling it past its maximum capacity of approximately 425 people during the main lunch hours from 11 a.m. to 2 p.m.

“There are lines — I’m not gonna say that there are not,” said Scott McWilliams, director of Dining Services. “It happens every year, to be perfectly honest with you.”

Prunty said he is confused by the lines because there has been a decrease in the number of people being swiped into the Campus Center compared to last year. In the fourth week of September at the Campus Center, approximately 1,000 students were swiped in between 11:30 a.m. and 12:30 p.m. At that same time last year, approximately 1,200 students were swiped in, according to graphs provided by Prunty.

Prunty said he does not think the lines are related to the closing of Towers Dining Hall.

The closing of Late Night and the change from Towers Dining Hall to a retail location have also been sources of concern for students. Prunty said the goal to decrease the meal plan cost and underutilization of Towers Dining Hall affected the decision to eliminate Late Night.

“You can’t do that without trying to find some money in your budget to actually offset that loss of revenue,” Prunty said.

Sophomore Joel Duval said he was so unhappy with the changes that he emailed the college’s President Shirley M. Collado with his concerns about the new marketplace and lack of Late Night.

Duval’s email was redirected to McWilliams, who offered to meet to discuss Duval’s complaints, but Duval said he chose not to respond because he felt it would not change anything.

“The main thing is that they got rid of a dining hall, and now 6,000–something students have to go to two dining halls that aren’t even open that late,” Duval said. “You’re limiting our options of swipe meals.”

A petition to bring back Late Night began circulating online Sept. 27. To date, 1,178 people have signed. The Ithacan could not verify the identity of the campaign organizer.

Students who commented on the petition said it is necessary for a nonretail late–night dining option. Prunty said the college cannot reinstitute Late Night without ensuring the college can afford it.

Sophomore Jonah Robertson, a student worker at Terraces, said he signed the petition because he was unhappy with the lack of late–night options. He said Towers Marketplace was no longer an option for him because he used all of his Bomber Bucks.

“I’m kind of condemned to not eating past nine if I don’t have food already,” he said.

Junior Carmen Enge, a founder of Not Another Bite, a student organization dedicated to improving Dining Services, said she believes the issues are because of staffing shortages and a need to cut expenses.

“It’s a big staffing issue at the root of the problem right now,” she said. “All the workers are already overworked because of the sheer amount of labor that is expected.”

Prunty said he thinks the workers seem overwhelmed because of the shift to in-house dining. He said 457 students and 157 staff work in dining halls and catering. He said a few workers left during the transition. He said the college is specializing its staff, including recently hiring a vegan chef to run the vegan station at the Campus Center.

Students host forum on future of Dining Services at IC