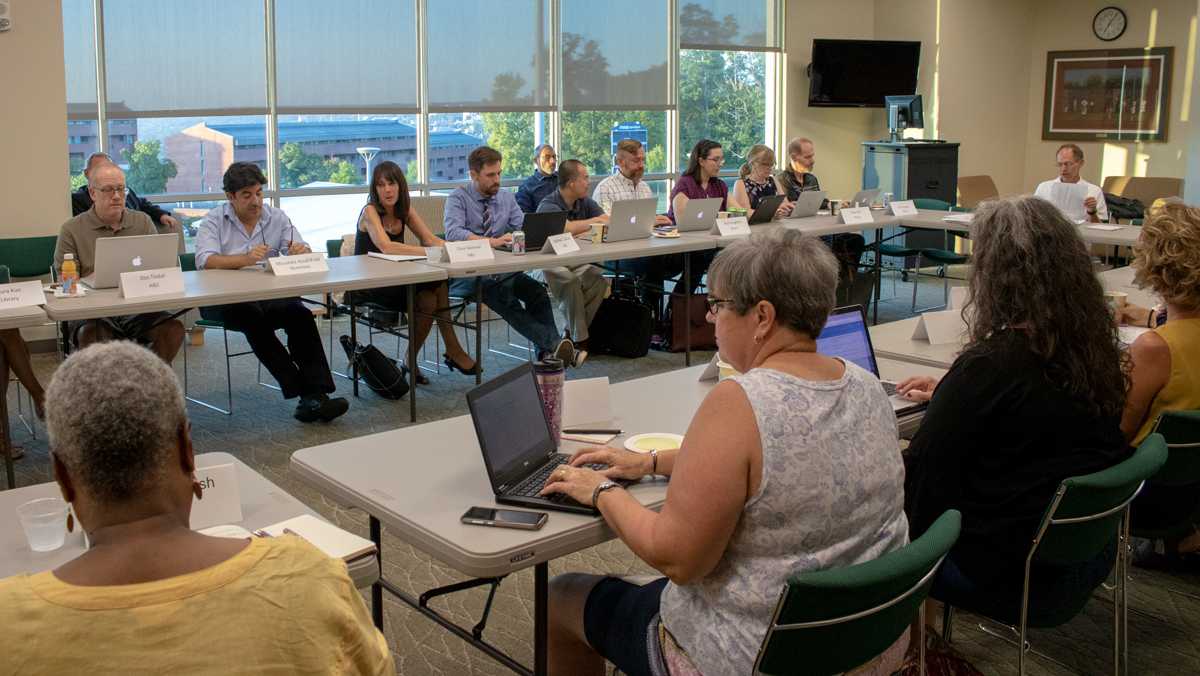 Caroline Brophy/The Ithacan
The Ithaca College Faculty Council (FCEC) held a working group meeting of the Faculty Council on March 10 to discuss holding a no confidence vote against the administration. Featured image is from a Faculty Council meeting from Sept. 4, 2018..
By Alexis Manore — News Editor
Published: March 11, 2021

The Ithaca College Faculty Council has decided it will not hold a vote of no confidence against the administration.

The council discussed having a vote of no confidence at its March 2 meeting but tabled  the discussion for a March 17 meeting to see if faculty constituencies were in favor of holding a no confidence vote or if they wanted to pursue other options. The Faculty Council Executive Committee (FCEC) held a working group meeting of the Faculty Council on March 10. The vote would have been a response to the administration’s handling of the Academic Program Prioritization (APP) process, in which 116 full-time equivalent faculty positions are to be eliminated. During the working session, the council discussed feedback it received about a no confidence vote and unanimously endorsed a resolution from the School of Humanities and Sciences (H&S) Faculty Senate asking the Academic Program Prioritization Implementation Committee (APPIC) to provide benefits and aid to terminated faculty members.

The council passed a motion to not pursue a no confidence vote, with 25 in favor of the motion, seven opposed and one abstention.

At the meeting, representatives from each school at the college reported whether or not their constituents supported a no confidence vote, according to a working session report written by Claire Gleitman, professor in the Department of English, women’s and gender studies coordinator and secretary of the council.

The School of Health Sciences and Human Performance held a meeting and polled those who attended. Of those who attended the meeting, 68% opposed a vote of no confidence. In a separate poll that garnered 84 responses, 77% were opposed to a no confidence vote, and 23% were in favor. The Department of Occupational Therapy described itself as unanimously opposed.

The School of Music held an anonymous survey, to which 47 faculty members responded. Of those who voted, 28 were in support of a vote of no confidence vote, and 19 were opposed. Representatives from the music school said some faculty members think that the faculty were not fairly represented on the APPIC. The APPIC is the group that made the decisions about how many faculty positions would be terminated and which departments, majors and programs would be eliminated. There are no faculty members on the APPIC.

The representatives said this is shown through the lack of changes from the draft recommendations to the final proposals, despite the fact that college community members provided feedback to the APPIC. They also said that the administration has not provided a rationale for the cuts, that the cuts do not seem to be strategic and that curriculum will be impacted greatly without faculty consent.

There were also concerns around enrollment and yield, according to the report. Many faculty members also raised concerns that the opinion piece that President Shirley M. Collado and La Jerne Cornish, provost and senior vice president for academic affairs, wrote for Inside Higher Ed expressed issues with faculty to the national media.

However, other faculty members felt that a no confidence vote would further harm the college’s reputation, that it would be damaging to the college’s enrollment and recruitment efforts and that the process to hold a vote has been moving too rapidly and does not give the administration time to announce its plans for phases two and three of the APP. Some faculty believed that the discussion of a vote of no confidence is laced with racism and sexism, and worried that the vote would alienate students and faculty of color.

“Faculty do not speak in one voice in their response to APPIC,” the report stated.

Representatives from the library said librarians were unanimously opposed to a no confidence vote.

Chris McNamara, clinical associate professor, clinic director in the Department of Physical Therapy and chair of the Faculty Council, said she received approximately 165 emails before the meeting, 90 of which were from staff members. She said that some of the messages expressed concerns about the possible vote and that some believed that faculty members were not considering the good of the college and the damage that a no confidence vote would cause.

Some messages stated that faculty members were being insensitive to staff cuts. At least 264 staff members have been furloughed or laid off since March 2020.

McNamara said she received messages from students and faculty who were not in favor of a vote of no confidence.

The group IC Alumni Against Austerity created a letter voicing its support for the potential no confidence vote. According to the letter, the group emailed the letter to the FCEC on March 10. The letter has received more than 70 signatures from alumni, as of March 11.

“We want to reinforce that there are other ways forward,” the letter states. “We join in many across the community to ask for a pause in the present order of things and a more serious retooling with sustained collaboration and buy-in among constituents. Accordingly, we would also support a Vote of No Confidence in the Board of Trustees, should the faculty council decide to move in that direction.”

McNamara said that in a conversation with Dave Lissy ’83, chair of the Ithaca College Board of Trustees, he told her that the board views the APPIC recommendations as final and that the board fully supports the Senior Leadership Team (SLT). He said a no confidence vote would not change that. Lissy also said a vote of no confidence would have a negative impact on the college’s reputation.

There was also discussion about claims that critiques of the SLT have been racist. In November 2020, a group of faculty members of color approached the FCEC with similar concerns.

Some council members wanted to hear specific examples of racist critiques of the SLT and asked how they can express concern about the SLT without being perceived as racist, according to the report.

One council member mentioned the no confidence vote against former President Tom Rochon, who resigned after students held protests against racism on campus, and the college community believed that Rochon was unfit to change the campus climate and lead the college. The results of these votes showed that the majority of staff, students and faculty had no confidence in Rochon.

The council member said he did not want to go back to a time when the college had a president who did not speak out about racism at the college.

“While he agreed that there are reasons to criticize the college leadership, he wondered why — if our concerns are rooted in the APPIC recommendations — we have not lost our confidence in those people on the implementation committee … who are the recommendations’ authors and, he added, the ones who seemingly ignored the feedback they received. Why, he asked, is our anger focused on the President and Provost?” the report stated.