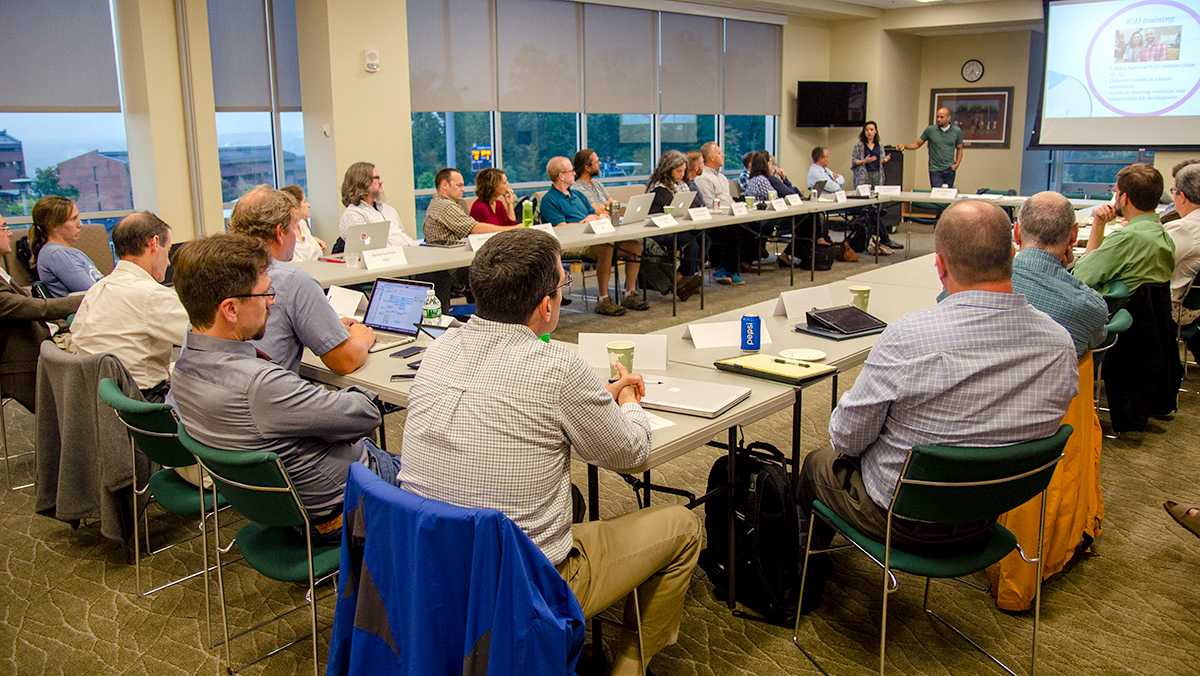 File Photo/The Ithacan
Members of Faculty Council were able to share their concerns and questions about the changes made to their dental plan that was enacted this year, elected the executive committee and held an executive session for about an hour at its final meeting of the semester. Both the 2021–22 and 2022–23 faculty council members were present for the meeting.
By Olivia Stanzl — Assistant News Editor
Published: May 4, 2022

The Ithaca College Faculty Council met May 3 for its final meeting of Spring 2022 to discuss employee benefits, elect the executive committee for the 2022–23 academic year, confer degrees and meet with President La Jerne Cornish.

Members of the council were able to share their concerns and questions about the changes made to their dental plan that was enacted this year, elected the executive committee and held an executive session for about an hour. Both the 2021–22 and 2022–23 faculty council members were present for the meeting.

Hayley Harris, vice president in the Office of Human Resources and Planning, presented on the changes made to the college’s dental plan for 2022, which only impacted out-of-network services.

Faculty members who are eligible for benefit coverage include hourly employees who work at least 1,000 hours per fiscal year, salaried staff who are not temporary and work at least 50% of the time in the fiscal year and faculty who teach at least 14 credit hours per academic year.

The college’s Faculty and Staff Benefits Committee (FSBC), Harris’ benefits team and partners like Aetna, a managed healthcare company, and the National Financial Partners Corporation, an insurance company, consult the Office of Human Resources on decisions regarding benefits.

The FSBC consists of 12 members of the campus community who were nominated by both faculty and staff council. Harris said the FSBC meets monthly, but Peyi Soyinka-Airewele, professor in the Department of Politics, said she heard the committee may not be meeting that frequently.

“I met a faculty member a couple of weeks ago who said she was on the committee, and they hadn’t met in a while,” Soyinka-Airewele said.

Harris said that at the end of Spring 2021, her team and partners recommended that the college reduce certain coverages for network dentists by 10%. Harris’ slide showed that Type A out-of-network coverage — preventative services like cleanings and x-rays — was reduced from 100% to 90%. Type B out-of-network coverage — basic services like filings and emergency care for dental pain — was reduced from 80% to 70%. The college also changed the amount it was reimbursing employees for out-of-network services to align with the amount it was reimbursing for in-network services, which has resulted in participants seeing a significant change in their reimbursements.

Harris said that while salary is the largest portion of the Office of Human Resources budget — at 50% — faculty benefits are second at 15%.

In an email sent to the college’s faculty and staff March 25 that was obtained by The Ithacan, Harris said the prior structure of dental benefits was not a good use of the college’s resources.

“Under our prior structure, a dentist could have hypothetically charged $500 for a basic cleaning and the college would still have allowed 85% of that charge — $425 — and reimbursed that at 100%,” Harris said in the email.

According to Harris’ presentation, the components of the benefits budget include $12.5 million for medical plans; $1.2 million for dental, vision, life, accident and long-term disability insurance; $5 million for the Teachers Insurance and Annuity Association; $3 million for tuition remission; and the remainder include benefits like flu shots, unemployment and workers compensation.

“When these recommendations were presented, they seemed quite reasonable,” Harris said. “We make lots of decisions every day. This was not something I felt, at the time, that we needed to vet broadly, because 10% is 10%.”

“Knowing that, we would have done [dental plan changes] differently, communicated differently, for sure,” Harris said. “But that was a year ago and we were making decisions based on the information that we had at the time.”

Charis Dimaras, professor in the Department of Music Performance, said it is difficult for the college to run smoothly day-to-day if professors are out sick for dental related issues because they were unable to get the care they needed.

“If you’re sick, or if you’re faltering, or if you can’t eat and if you can’t teach, then I don’t think you’re very worried about what will happen in your retirement in 30 years,” Dimaras said.

“The Faculty Council recommends to the board of trustees that all those students who have completed the requirements of their respective degree as certified by the records of the Office of the Registrar be awarded the appropriate degree at this year’s commencement and on each of the additional approved graduation dates during the coming year,” McNamara said.

Commencement will be held in two sessions at 9 a.m. and 3 p.m. May 22 in the Glazer Arena of the Athletics and Events Center and virtually through a livestream.

Executive Committee for the 2022–23 academic year

“I’m encouraged for next year’s Council to take us forward and my biggest wish is that you get to meet in person,” McNamara said. “And really, that will mean a big positive on so many fronts, that we will be a healthier community.”

The Faculty Council also met with La Jerne Cornish for about an hour in a closed session which The Ithacan was not allowed to attend.