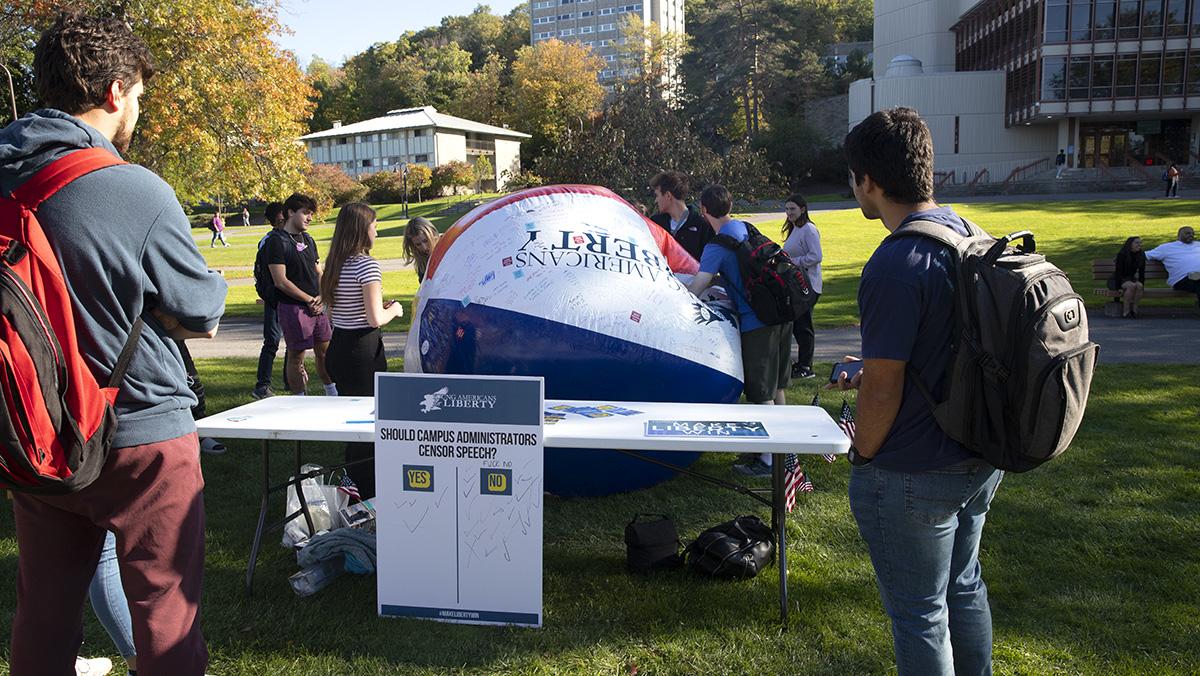 Kalysta Donaghy-Robinson/The Ithacan
Senior Caroline Peyron, president of ICYAL, said the activity was meant to remind students about their right to free speech and assembly and allowed students to write on a giant beach ball over five feet in height. Later in the day, the situation escalated when some students slashed the ball and argued with the organizers.
By Prakriti Panwar — Contributing Writer
Published: October 10, 2022

Ithaca College students engaged in heated discussions Oct. 5 on the academic quad outside of Campus Center around a free speech ball set up by the college’s Young Americans for Liberty (ICYAL) chapter.

Senior Caroline Peyron, president of ICYAL, said the activity was meant to remind students about their right to free speech and assembly and allowed students to write on a giant beach ball over five feet in height. Later in the day, the situation escalated when some students slashed the ball and argued with the organizers. Peyron said writing on the ball was conditional to two rules: No threats would be accepted because that is not freedom of speech and there would be no censorship of others’ speech.

Young Americans for Liberty (YAL) is an organization that works with college students to advance a pro-liberty ideology. Peyron said the ICYAL is a constitution-based, pro-gun group that believes in free speech and small governments. The chapter held the same activity in 2016 as a part of Freedom Week.

According to Niche.com, 92% of students at the college are either progressive/very liberal or liberal.

First–year student Rowan Keller said the people they saw were against the club, but they saw students express their opinions peacefully.

“I just kind of mainly saw people either going up and having political debates with the people who brought the beach ball for the club or going up and kind of retaliating … [by writing] very progressive things [on the ball], opposed to the intent of the club, which is right–wing,” Keller said.

Keller said that from what they observed, they found it interesting that the libertarian organizers came prepared to deal with the consequences of setting up the beach ball in the middle of a college campus with a largely liberal student body. They said the campus community may be affected by the event in the future in context of political activity on campus.

“I feel like we may have more demonstrations like this, maybe by opposing clubs,” Keller said. “I’m sure this will be infamous among [the college’s] students.”

The beach ball activity was set up around 10:15 a.m. and by 2 p.m., the beach ball was scribbled with messages from members of the campus community. Phrases like “COVID isn’t real” and “Roe is dead and it’s great” — in reference to the Supreme Court overturning the Roe v. Wade legislation that guaranteed the right to abortion in the U.S. — caused mixed reactions from the campus community as students debated and discussed what was on the ball.

Some students who did not agree with the message being conveyed on the ball and by the organizers protested by writing messages in support of more liberal views, like “Happy LGBTQ+ month” and “No person is illegal” on the beach ball.

Particularly, the phrase “hate speech is free speech” stirred up controversy among students.

First-year student Augie Brightman said while he is a proponent of free speech, he believes that hate speech is a real issue and there should be limitations to what people can say.

“I think all they wanted to do was just denounce hate speech and claim that it’s not real when it very much is,” Brightman said. “This may sound broad but really, you can’t say whatever you want. That’s just the fact of the reality and I think that’s honestly kind of a good thing.”

Peyron said while there could be social consequences for what is considered to be hate speech, the government should not interfere because anything can be considered offensive.

“My opinion on that is that the government should not be able to limit what you say regardless of whether it’s considered hate speech or not,” Peyron said. “I’m not endorsing anybody who insults or discriminates against people verbally, but I do believe that it is your right to say what you believe. It’s not going to gain you any friends if you go around insulting people, but it is within your right to do so.”

Elianna Geertgens, field representative for The Leadership Institute for upstate New York, said that the free speech ball encouraged students to engage in discussion. Geertgens was at the college to help set up the event and talk to people, Peyron said. The Leadership Institute is a non-profit that trains conservatives across all age groups to grow in politics through workshops, seminars and training schools.

Geertgens said despite the tension and debates, she felt that the exercise was successful in conveying its intended message.

“Everyone got to express their opinion whether they chose to do that verbally or with pens,” Geertgens said. “We did have our pens stolen. We had our ball slashed, [and] we covered it up with a sticker that some of the students provided and put on the ball. We had a couple of our flags stolen and other stuff, but it was okay. I think it was good.”

Many students questioned Geertgens credibility when they found out that she was not a student, faculty or staff member of the college.

Sophomore Zoe Blain said she found it strange that Geertgens was instigating animosity on campus when she was not a student of the college. Blain said she felt disturbed by the pro-gun discussions that took place.

“I feel very unsafe when people are talking about gun rights on campus because this is where I live,” Blain said. “And I think I’d be a lot more comfortable knowing that we’re a gun–free campus and the campus doesn’t really believe so much and so strongly in the right to bear arms.”

Peyron said Geertgens had the right to be at the activity because according to the college’s club re-recognition guidelines, as long as 51% of the members are from the college, anybody is allowed to be a part of an on-campus organization. Peyron said the student organization, which stopped sometime around 2016, is currently being restarted with her as the president and senior Julian Lacono as the vice president on the executive board.

“So I think some people who were unhappy with her being there were just unhappy with the things that she was saying because they didn’t agree,” Peyron said. “She had every right to be there.”

First-year student Lee Moran said they found the free speech ball to be excessive. They said despite that, the incident could lead to important discussions in the future.

“I feel like it’s kind of not worth it almost to give them the time of the day,” Moran said. “But I think this should open a dialogue at least about what free speech actually is and what are some of the implications of the smaller comments on the ball.”