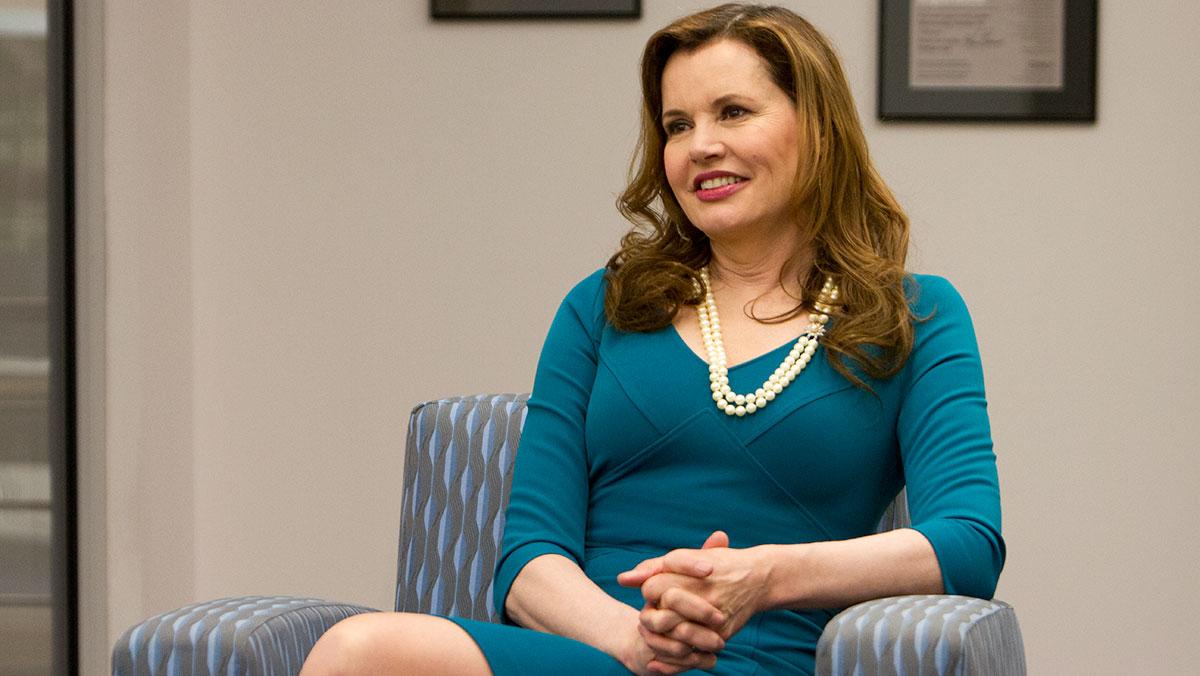 Corey Hess/ The Ithacan
Geena Davis said she decided to found the Geena Davis Institute on Gender in Media when she was watching television with her daughter and noticed the lack of women on screen.
By Maura Aleardi — Staff Writer
Published: April 1, 2015

Hundreds of Ithaca College students emerged from Geena Davis’ open address March 31 with the influence of gender inequality in media fresh on their minds.

Famous for signature roles in “Stuart Little,” “Thelma and Louise” and “A League of Their Own,” the actor and founder of the Geena Davis Institute on Gender in Media spoke to students, faculty and Ithaca community members in Ford Hall. The focus was not on her acting career, but on her efforts to highlight the role women have played in many forms of media.

Davis said she decided to found the Geena Davis Institute on Gender in Media when she was watching television with her daughter and noticed the lack of women on screen. She said she was motivated by one question: How many female characters are in children’s movies and films?

When Davis would bring up this inequality to her friends, she said they were unaware of the discrepancy. She said she noticed this more than her friends did because of the role she played in the film “Thelma and Louise,” which follows two housewives who leave their boring lives to go on an unusual road trip.

“It was the reaction that impacted me so much,” Davis said. “It made me suddenly realize how few opportunities we give women to feel like that about the female characters.”

Davis said the tendency for women to be seen and treated differently from men is largely subconscious because of the way media portrays both genders, specifically for young girls and boys.

“The more hours of TV a girl watches, the fewer options she thinks she has in life,” Davis said.

Freshman Dakota Collina said this not only shows the negative influence media has on girls, but also on boys. He said it is a perfect example of the gender issues in media today.

“It’s just one of the facts that shows such the parallel between guys, because the more hours they watch, the more confident they are about themselves,” Collina said. “It just shows how unjust television is currently, and film, because how can we have 50/50 population and then girls watching TV and feeling like they can’t do anything, and guys watching TV and feeling like they can do anything. That just is a really great example that illustrates what’s going wrong and what needs to change.”

Ithaca High School senior Maddie Vandenberg said Davis’ ability to lead a diverse lifestyle allows her to reach more people in her efforts to fight against gender inequality in media.

“I think she’s inspiring because she’s not only an empowering actress, she’s also done sports, and now she has this amazing company,” Vandenberg said. “It’s empowering to everybody, not just people who want to be actors.”

Not only has Davis made efforts outside of her own films to promote gender equality in media, she said she also advocated for the cause on-set for “Stuart Little.” She said while filming the boat-race scene, Director Rob Minkoff was gathering boys to race the boats and girls to cheer. Davis said she looked at the scene and suggested to Minkoff that some of the girls race boats. Minkoff completely agreed and was surprised he hadn’t thought of the same idea, Davis said.

As an example of how influential media can be, Davis spoke about her role as President Mackenzie Allen in the show “Commander in Chief.” She said after the show, a survey was conducted that showed 68 percent of the people surveyed were more likely to vote for a female president after watching one season of the show.

Additionally, Davis said female characters on screen are influential on females in the workforce. Specifically, she said one reason why females are rarely employed in jobs behind the camera is because there are few females represented in the same roles on screen. She said there is no shortage of female forensic scientists and engineers because of the many shows and films that feature females in these careers, such as “Bones” and “CSI: Crime Scene Investigation.”

“Media itself can be the cure for the problem it’s creating,” Davis said.

While many students were inspired by Davis’ efforts, some were skeptical, such as junior Erica Moriarty. She said she agrees with Davis’ intentions, but doesn’t think Davis is looking at the bigger picture.

“I did find her call to action of needing more women in all arenas a bit superficial,” Moriarty said. “While I do agree to some extent, I believe there’s a larger issue of the gendered wage gap that she didn’t delve into. More female lawyers? Yes. More female doctors? Please. But what happens when the girls grow up to be women and finally get into these arenas? If they’re still not getting paid as much as the men, have we reached equality?”

Moriarty said she is particularly concerned with Wal-Mart’s sponsorship of Davis’ upcoming Bentonville Film Festival. The film festival will boost efforts to increase women and diversity in film, according to the Geena Davis Institute on Gender in Media website, but Walmart was involved in a class-action gender discrimination lawsuit in 2011, Wal-Mart Stores, Inc. v. Dukes. Moriarty said by partnering with Wal-Mart for the film festival, Davis is sending the wrong message.

“By accepting them as a sponsor, the festival accepts their practices,” Moriarty said. “There are many other avenues to explore for distribution than Wal-Mart. The distribution company Women Make Movies is a great place to start.”

By speaking at the college, Davis said she is able to reach even more people than just those in the audience, which is highly beneficial to the fight against gender inequality.

“When you reach people who are going to be in positions of power and authority, it has an exponential effect because they can share it with everybody,” Davis said. “You can share this with everyone you know. Just by talking to you, I’m reaching so many more people, so it’s a very important place to come and talk.”

Collina said Davis is inspiring because of her dedication to the cause, even after thriving in the film industry, as opposed to an actress who might fight for gender equality in media and come off as trying to gain more female roles for herself.

“Such a prominent person in the industry who has already found success as a woman actress to then go back and try and fix things that she already kind of conquered herself is very inspiring,” Collina said. “She’s at a level that’s much more ‘This isn’t just because I want more parts, this is because society needs it.’ I feel inspired just because she’s looking back and then helping other people get forward.”

Davis closed her speech by sharing her one dream with the audience. She said she wishes to be able to tell her daughter the story of when women were seen as less than men, to which her daughter would reply, “Mom, are you making this up?”