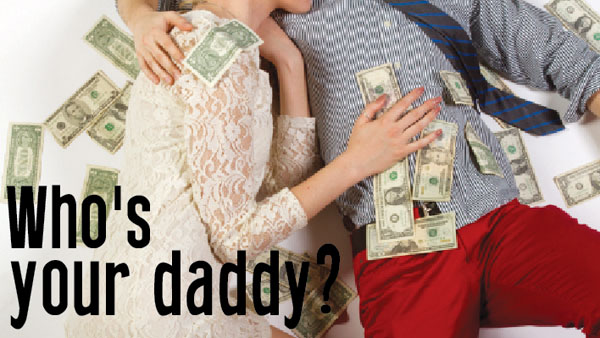 It all began with a wink.

Ithaca College senior Bridget* slipped out of her house one afternoon during fall break last year after telling her mother she was driving to New York City to meet a friend. However, she left out some details — specifically that this friend was a 43-year-old corporate attorney, and they first connected when he virtually “winked” at her online.

Bridget met him for the first time at a cafe, his usual location to meet in person with girls he interacts with online. Sitting across from him at a round table, Bridget hashed out logistics of their potential arrangement, including a monthly allowance to assist her with college expenses and student loans.

“It was the most uncomfortable experience of my life,” she said.

Bridget is one of about 40 students registered with an ithaca.edu email address on SeekingArrangement.com, a dating website that connects young men and women — “sugar babies” — with wealthy benefactors — “sugar daddies” and “sugar mommies.” The sugar babies offer companionship in return for compensation, whether monetary or otherwise.

On SeekingArrangement, college students are offered premium memberships for free. Angela Jacob Bermudo, public relations manager for SeekingArrangement, said the website appeals to college-aged users because it’s an alternative to taking out student loans or working a part-time job.

“What we want to do is help out college students,” she said. “We don’t want them to have to spend more money to make money.”

Launched in 2006 by MIT-graduate Brandon Wade, the website brands itself as “the elite sugar daddy dating site for those seeking mutually beneficial relationships and mutually beneficial arrangements.” Bermudo said the site currently has more than 2.7 million members worldwide, with approximately 2,000 to 3,000 new members joining each day.

The running joke about Wade creating the site to overcome his social awkwardness and meet girls has some truth to it, Bermudo said.

“He soon realized that he was not the only one who had this issue, and it wasn’t just reserved to men who didn’t have the social skills for dating,” she said. “It was also men who were just busy, who didn’t have time for your conventional relationship.”

Members on SeekingArrangement must pay to upgrade for access to certain features. For instance, there are three levels of membership for sugar daddies: “basic” allows members to view profiles, “premium” adds the ability to send messages and those with a “diamond” membership are able to have their income and net worth verified.

Two of the around 40 sugar babies on SeekingArrangement registered with an ithaca.edu email address are actually male. There are only around 12,000 sugar mommies on the site, compared to around 357,500 sugar daddies, which equates to about 30 sugar daddies for every one sugar mommy.

Scott*, a 36-year-old environmental lawyer, signed up for SeekingArrangement two years ago. He states on his profile he is “looking for a young woman who likes to be treated like a princess and enjoys the company of a slightly older man.” He said he is partial to this blunt approach to dating.

“I’m a very busy person, so I don’t really have time for traditional relationships,” Scott said. “I’ve always had an appreciation for women who are young, intelligent and lovely.”

His one previous arrangement lasted two years and ended last May after the girl graduated from college. She received a $3,000 monthly allowance, but Scott said he does not believe paying her to date him was exploitative in any way.

“Everything in the world comes with some kind of price, be that obvious or hidden,” he said. “I like the idea of being able to provide some assistance for somebody that has potential in life.”

Background verification is a separate feature from membership levels. The site employs TC LogiQ, a screening company, to perform a basic criminal check that is $25 for sugar babies and $50 for sugar daddies and sugar mommies. A small checkmark symbol is added to member profiles if the results indicate they have not committed a crime.

“We advise all of our members to consider dating only verified members because that’s safer,” Bermudo said.

To create a profile on SeekingArrangement, an interested user must first specify a type of account — either a sugar daddy, sugar mommy, male sugar baby or female sugar baby. Then the user fills out some basic information about his or her location, marital status, physical characteristics, drinking habits, among other personal data.

The registration process looks like a typical dating website until one reaches the “Lifestyle Expectations” option. Here, sugar babies can specify the amount they expect from their sugar daddy or sugar mommy to support their lifestyle, ranging from “minimal” at less than $1,000 per month, to “high” at more than $10,000 per month. This can either be in the form of an allowance or other forms of pampering, such as dinners, gifts or travel.

Bridget selected the “negotiable” option when she signed up for the site at the beginning of the 2013–14 academic year. She said it began as a joke to see how many hits she could get, and within months her inbox was filled with more than 120 messages.

“I’ve had messages where the first thing they’ve said to me is ‘spit or swallow?’” Bridget said. “And I’ll simply reply, ‘I’m not a prostitute,’ and then block them from seeing my information. There’s always going to be those creepy people, but it’s totally your choice.”

Bridget had four successful arrangements through the site, but she said her fifth arrangement quickly became uncomfortable when he immediately expected her to have sex with him.

“He wasn’t understanding that this kind of relationship is not exactly prostitution and it’s not exactly dating,” she said. “It’s somewhere in the middle.”

According to Article 230 of the New York Penal Law, a person is guilty of prostitution when such person engages, agrees or offers to engage in sexual conduct with another person in return for a fee.

Todd Livingston, a legal studies lecturer at the college and a practitioner of criminal and family law in Ithaca, said SeekingArrangement and other sites like it operate under the same model as an escort agency in that one trades or barters for companionship, not sexual acts. He said the problem lies, however, in defining what constitutes a sexual act because everyone has personal interpretations.

“If someone has a total foot fetish and they get a job as a shoe salesman, is that sexually inappropriate or is it a lucky byproduct?” Livingston said.

The state legislature, out of necessity, has had to draw a line delineating what constitutes prostitution, and that is where SeekingArrangement and other corresponding issues such as massage parlors, strip clubs and Craigslist hookups, are able to blur it, according to Livingston.

“A lot of these people are probably engaging in prostitution,” Livingston said. “What is the compensation for? Is it really for going out to dinner? Is that what they’re getting the diamond bracelet for? Or do they sleep with the guy so he’ll pay to go out to dinner with them again? What are you actually getting?”

Kate Korgan, senior associate dean of the graduate college and a professor of sociology at University of Nevada, researches legal brothels in the state and finds women from diverse backgrounds — young and old, college-educated and high school dropouts. She said the advent of the Internet has transformed the sex industry, and there are no clear boundaries anymore regarding sex work since mainstream culture has become more sexualized.

Korgan co-authored a book, “The State of Sex: Tourism, Sex and Sin in the New American Heartland,” with Crystal Jackson, assistant professor of sociology at the John Jay College of Criminal Justice. Jackson said she thinks the explicitness of sites like SeekingArrangement make people uncomfortable.

“We don’t like to be reminded that young women realize that we live in an unequal society where women’s value can be calculated on how normatively attractive they are, and that intimacy and money do intersect,” she said.

Bridget said she is not ashamed of anything she does, and the one thing she wants people to know is that she is not a prostitute.

“I have not had sex with any of my sugar daddies,” she said. “That doesn’t mean I haven’t had physical relationships with any of them. You can draw a lot of lines for yourself.”

*Names have been changed to protect anonymity