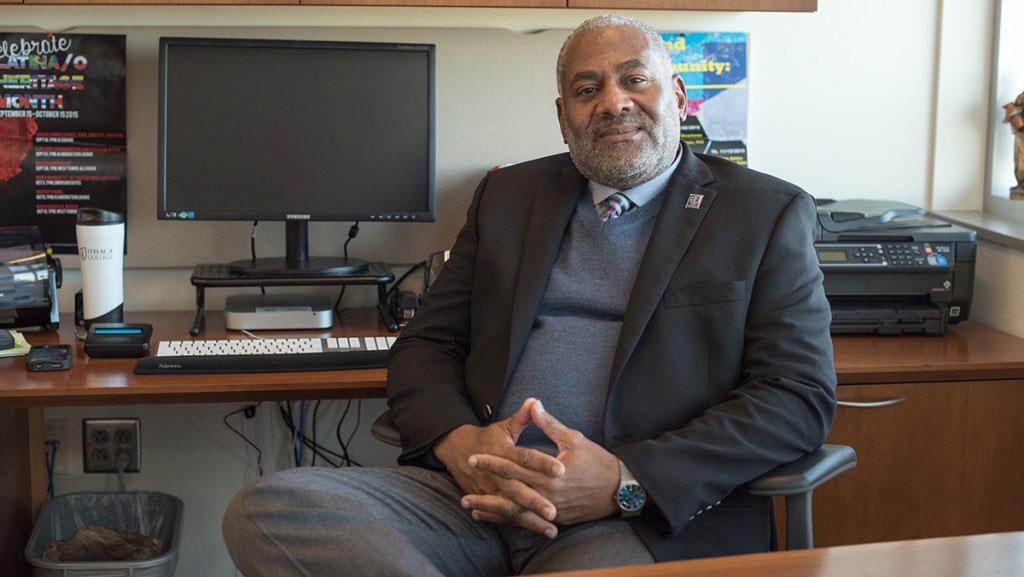 Amanda den Hartog/The Ithacan
Roger Richardson, associate provost for diversity, inclusion and engagement, was announced by President Tom Rochon on Nov. 10 as the interim chief diversity officer. According to a recent announcement, it is unclear whether a permanent person will be hired for the position.
By Elena Piech, Faith Meckley — Staff Writer and News Editor
Published: March 23, 2016

Consistent with The Ithacan’s March 2 report, the March 23 announcement on behalf of Roger Richardson, associate provost for diversity, inclusion and engagement and interim chief diversity officer, stated, “the college has fallen short on projected deadlines for some of the action steps we mapped out in October.” However, accomplishments have been made with smaller goals and deadlines. The announcement discussed 10 different updates.

The announcement discussed an internal search to fill a new position called the director of programs and outreach. This person will organize workshops focused on diversity and inclusion and serve as a resource for students who feel they have experienced bias or microaggressions on campus and will log reports of those instances. The job opening was posted March 7, and the target start date for the position is June 1. Additionally, the college has expanded the number of people who can serve as support for those who experience bias and discrimination. The full list of individuals can be found on the Support Network section of the Diversity at IC site.

Additionally, the announcement confirmed the establishment of a Diversity Postdoctoral Fellowship for those in the science, technology, engineering and math fields, and applications are currently being accepted.

Richardson said the college is currently unsure of whether or not a permanent chief diversity officer will eventually be hired. According to the announcement, community members have questioned whether the college will benefit more from a singular position, suggesting instead “a more distributed approach, with staff in multiple units who have diversity and inclusion as its responsibility.” Currently, President Tom Rochon is considering this feedback and working with the Council on Diversity and Inclusion to decide what to do with the position.

Missed deadlines include the formation of a community review board for Public Safety. The announcement said the college is waiting for the United Government Security Officers of America to review the drafted plan for how the community review board would function. As for the goal to hire an external review board to examine Public Safety, the announcement stated the school has found three firms that have expressed interest in performing this review, and the next step is the formal vetting process of the three candidates.

Regarding employee diversity training, the announcement said from September 2015 until just before spring break, there have been more than 40 workshops, webinars and other sessions to provide education on diversity and inclusion. Richardson said over 500 staff and faculty have attended these sessions, and Michelle Rios-Dominguez, manager of diversity and inclusion in the Office of Human Resources, predicts an additional 700 attendees in the next couple of months. All staff members are required to attend two training sessions by July 15 to be factored into the yearly performance review process.

Richardson said in the announcement that it’s easy to point out the college has missed some of its deadlines.

“Major shifts are accomplished through many smaller ones, and it would be disingenuous to connect missed deadlines with lack of progress.”