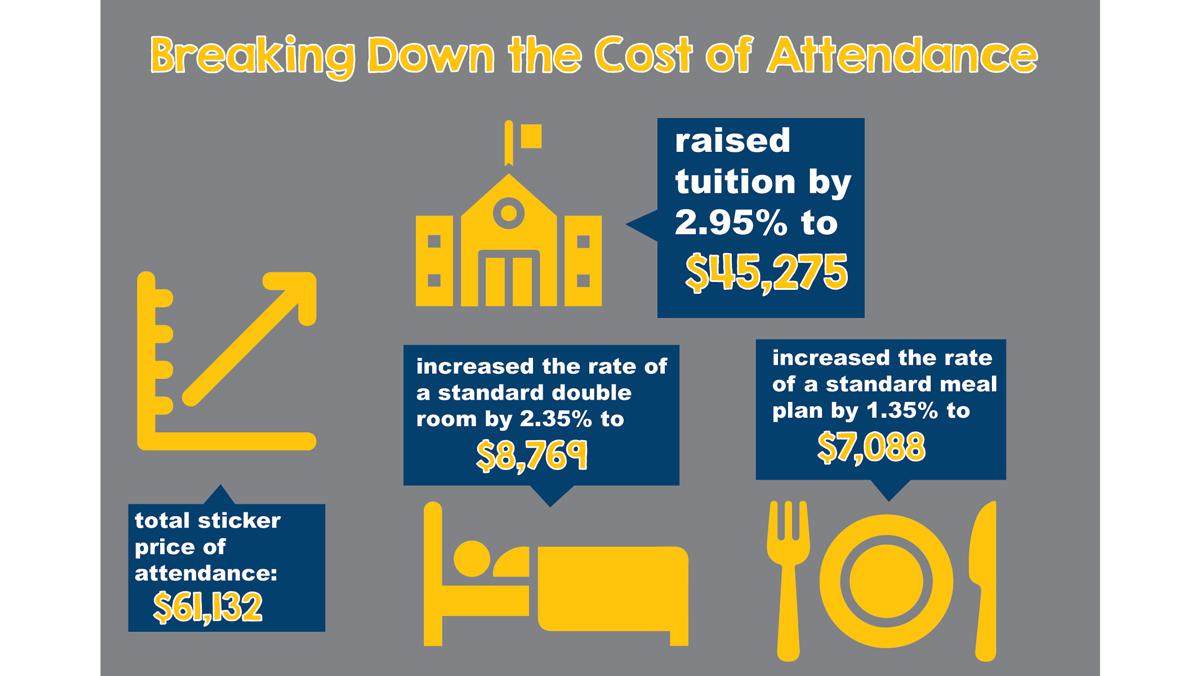 During its fall meeting, the Ithaca College Board of Trustees approved a 2.95 percent tuition increase for the 2019–20 academic year. This increase marks the first time in the college’s history that the total cost of attendance will exceed $60,000.

The college’s tuition costs have been increasing every year for decades, but in recent years, the percentage of increase has been on a downward trajectory, a priority of former president Tom Rochon’s. This recent increase changes that.

In the email, Collado said the increase reflects changes made to invest more in the student experience.

“The board makes its decision to set tuition during its fall meeting in order to provide this information as early as possible to families to support their decisions around college applications and admissions,” Collado said in the email. “The level of increase in tuition from the current year reflects our diligence in balancing efforts to keep costs as low as possible for students and their families while simultaneously investing in a high-quality student experience.”

The most recent campus climate survey, from 2017, conducted by Rankin & Associates, Consulting, detailed numerous findings that indicated a general dissatisfaction among the student body in the diversity and inclusiveness of spaces on campus. The survey found that “members of several constituent groups indicated that they experienced exclusionary, intimidating, offensive, and/or hostile conduct” and “several constituent groups indicated that they were less comfortable with the overall campus climate, workplace climate, and classroom climate — specifically referencing women, people of color, people with disabilities and first-generation students.”

The college has previously stated that the changes among the Division of Student Affairs and Campus Life, as well as additional personnel changes on campus — including the addition of two more counselors at the college’s Center for Counseling and Psychological Services — were done in an attempt to address these findings.

Some of that additional investment was a response to the campus climate survey, in which students expressed a desire for more outlets on campus to address intersectionality. The college made staff changes to the Division of Student Affairs and Campus Life, which was partially funded from the budget surplus.

During this current academic year, the college surplus dropped from $20 million to $5 million. Roughly $6.7 million of that went to salary and benefit increases, $6 million went to financial aid, $1 million was the result of lower enrollment and the remaining $1 million went to miscellaneous costs, William Guerrero, vice president of the Division of Finance and Administration, said. According to previous reporting by The Ithacan, Beth Reynolds, controller for the Office of Business and Finance, said part of the $6.7 million of the budget surplus went toward funding new positions within the Division of Student Affairs and Campus Life.

Guerrero also said the increase came as result of funding more programs and positions on campus.

“We don’t want a tuition increase, but we need to be responsible in trying to continue to meet the needs that are out there for the school,” he said. “That means investing in the right places, meaning investing in our students through financial aid and student services, and then also investing in the people that take care of our students.” 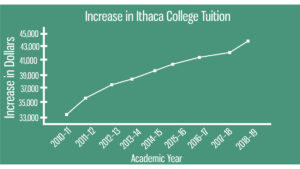 The price of Ithaca College’s tuition has increased each academic year. (Design by Maya Rodgers)

He said it is important to remember that the sticker price for tuition is not the amount that most students pay. Collado echoed this message in the campuswide email, saying that over 90 percent of students receive some form of financial aid. According to College Board, the average financial aid package for students at the college is $38,729.

Guerrero said there is currently a debate among some colleges about tuition resets — the practice of colleges drastically reducing their sticker tuition prices and their financial aid packages.

“There hasn’t been a case study that’s proven that it’s an effective strategy,” he said. “There’s always the challenge of value versus price. If you look at $60,000 versus $30,000 as a sticker price, you feel like you would get a better quality education for 60K than 30K.”

While the college budget is funded almost entirely through tuition and fees, the college also has another financial resource: the endowment, which is currently over $300 million. Some critics of high college tuitions cite college endowments as evidence that colleges could lower tuition rates.

The endowment is the college’s financial investments that are funded through donations, returns on investments and, sometimes, small pieces of budget surpluses. It can serve as a financial safety net for the college.

“You can’t just take the principal of an endowment and use it toward financial aid unless it’s designated for that specific purpose,” he said. “The donor restricts you on what the dollars are for. Right now, our endowment earnings contribute around $7.5 million to financial aid.”

In theory, the college could dedicate its entire yearly budget surplus to financial aid, but one of the issues with that comes down to budgeting philosophy and planning ahead, Guerrero said.

“You don’t plan ahead to have a large surplus,” he said. “Unfortunately, the mechanism doesn’t work reactively in a budgeting process to say ‘OK, let’s take this money and put it in financial aid. You begin the process saying, ‘OK, this is how much we are going to contribute to financial aid with an expected surplus of a certain dollar amount.”

Guerrero said many decisions about the budget are made by the Institutional Effectiveness and Budget Committee.

The IEBC is a committee comprised of deans, faculty, staff and two students. It meets every Tuesday and reviews historical budgets, current financial documents and feedback from different departments on campus to help make budget recommendations to the board, Guerrero said.

“Determining a tuition increase in higher ed goes through a very thorough shared governance process, meaning a lot of conversations with many stakeholders,” Guerrero said.

The same study said the average combined price of tuition, housing and dining for private institutions during 2018 and 2019 was $48,510, which is significantly lower than the college’s sticker price.

Senior Alyse Harris, Student Governance Council president, said she met with Collado shortly after the tuition price increase was announced. She said the administration seemed very cognizant of the fact that the rising cost of tuition is concerning to many students.

“She gave a lot of really great insight about what went into the process,” she said. “They know that it has a very real impact on students.”

“Frankly, that’s one of my big passions is how do I fix that challenge in why college is so expensive?” he said. “I really do believe that a college, especially a great school like this, should be affordable and accessible for students that want a great education.”

“I think they should do better redistributing our tuition dollars throughout campus,” he said. “I would prefer lower tuition over [extra features] because I know a lot of students definitely stress out over tuition. I think there are a lot of things we can give up rather than have a higher tuition.”

Junior Adam Schneider said he knew tuition was high going into college and expected it to rise throughout his time on campus.

“If they’re making the school better, I get it,” he said. “I mean, coming to Ithaca, I feel like you know as soon as you get here, that tuition is just going to keep going up.”

Sophomore Emma Dolan said she is supportive of some increases when it has significant benefits for students but said she has some reservations about this latest tuition increase. She said asking students to pay even more in tuition can be a lot.

“For what we do right now, I feel like it’s a lot to ask for,” she said. “I don’t think there is enough financial aid to support all these students.”