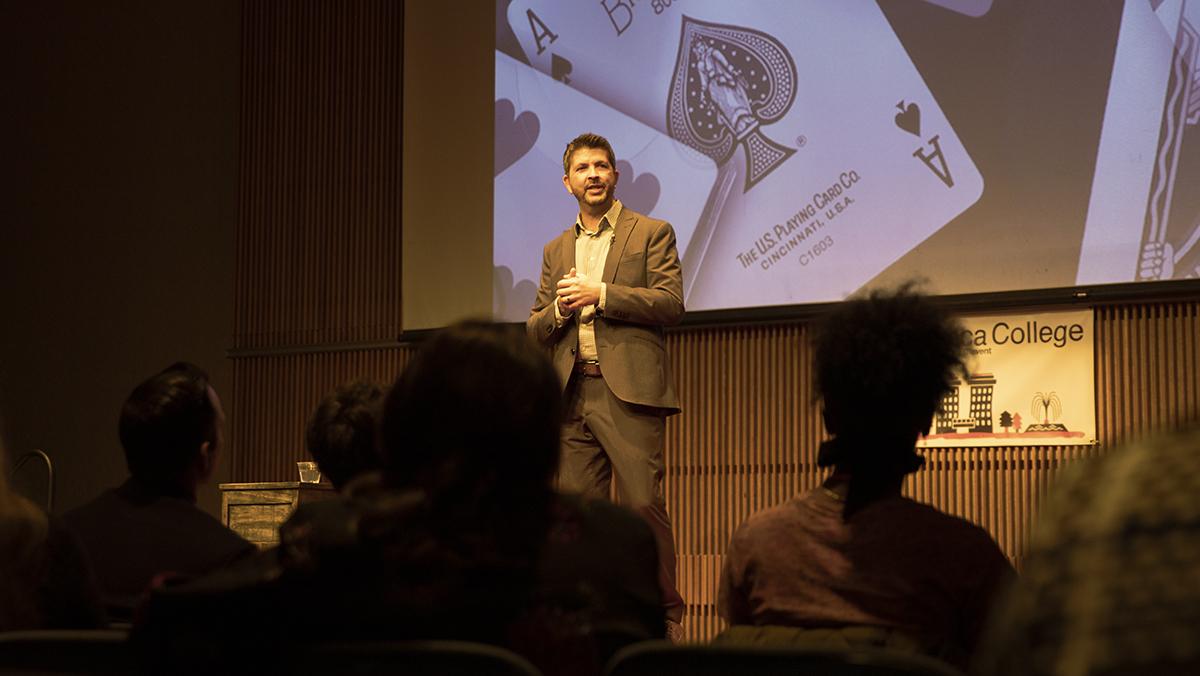 The audience murmured, gasped and cheered as Ithaca College’s first TEDx conference since 2017 was held Oct. 22 in Emerson Suites alongside a livestream screening in Park Hall, featuring 10 speakers who presented talks on the theme of “Empowerment.”

The doors to Emerson Suite’s doors opened at 9:30 a.m., where the audience was checked in and provided with a nametag and a scannable digital event program. The first half of the conference featured five speakers till noon, after which the speakers and audience broke for a lunch break. The conference reconvened at 1 p.m., after which the last five speakers presented their talks. Live updates of the event were also made available through the club’s Twitter.

Out of the 62 people that signed up, 55 attended the event. While none were present in Park Hall, 30 people viewed the livestream screening of the conference independently.

First-year student Dante Conde said he enjoyed attending the conference and found it to be an informative experience.

“The speeches were very well thought out and they were very well done,” Conde said. “I am very happy with the turnout because even though it is not an entirely full audience, it is an audience of those who care enough to be there.”

Dominic Cottone, organizational and industrial psychologist who presented “How to Unsuccess Yourself: Identity work in the Age of Workism,” addressed the cultural obsession of society with achievement and said the success of living itself is enough.

“I think our pursuit of success — I think sometimes the constant need for achievement in our lives — is killing us,” Cottone said in his talk. “We all have different viewpoints on what success is, but …  the risk right now is that we are making our success, and our work that it takes to get there, our primary identity.”

Alyssa Davis, model, marketer and presenter of “Shame Sucks. Let’s Talk” encouraged the audience to become more aware as consumers of products, advertisements and marketing campaigns. Davis spoke about shame versus empowering marketing and shared her own experiences with self image issues as a tween.

“If you’ve fallen prey to fear, shame–based marketing, you’re not alone,” Davis said. “I myself have 100% been guilty of adding yet another mascara tube to the makeup graveyard. … But even before I had access to beauty products or the money to buy them, I already had access to the impacts of this type of messaging on my self image.”

Elizabeth Bleicher, dean of Student Success and Retention and professor in the Department of English at the college, gave a presentation titled “Why are we here? Rethinking the Purpose of College.” Bleicher highlighted historical and economic events, such as formal education being accessible only to the aristocracy in 19th century England, to make students think about their goals while being true to themselves.

“I am also here to challenge the assumptions that reduce college to a transaction in professional credentialing,” Bleicher said. “If you approach college as only a means to a job, you are positioning yourself to serve larger economic forces, not to shape them.”

John Guastaferro, a magician and executive director of Hyundai Hope on Wheels Foundation and Genesis Inspiration Foundation, presented “Wonder is One Degree Away.” Guastaferro demonstrated that everyone has the ability to create wonder in their lives by engaging the audience in his magic tricks.

“Even a one degree microshift in our daily actions can bring wonder to life,” Guastaferro said. “You most certainly came in here as an audience of wonder seekers — you are now an army of wonder makers.”

Mark Addona, assistant professor in the Department of Strategic Communication and adviser to the TEDx Ithaca College club, said that while the turnout was not as high as the club had expected based on the sign-ups, the event was a success nonetheless.

“I’m really happy with everything that’s happening,” Addona said. “I think the [executive board] did a great job, especially [in] the last 24 hours [by] getting everything finalized and set up. The crew coming in from the live events class is doing an amazing job setting everything up, getting things working [and] getting the livestream going.”

Junior Nicole Kelly, who was at the conference for her Live Events class, said the conference was a great opportunity for her to gain hands-on experience.

“We just did the inauguration a few weeks ago [with our professor],” Kelly said. “… Now we are kind of alone for this one, so it’s cool problem solving without [the professor], just among ourselves.”

Cottone said he was impressed by the e-board’s team efforts and enjoyed interacting and building a network with other speakers.

“I think all of the people who are here today are my heroes,” Cottone said. “The team who put it all together is an amazing group of student leaders. And leadership is what I do for a living. I’ve just watched them work really well together. The team and the collaboration behind this is incredible.”