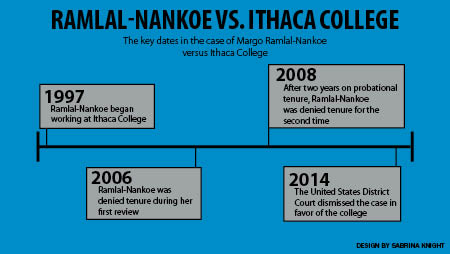 Federal court judge Glenn T. Suddaby dismissed the case of Margo Ramlal-Nankoe, a former professor in the Department of Sociology, versus Ithaca College on Jan. 27. Ramlal-Nankoe sued the college because she believed she was denied tenure based on her political views.

The decision was made more than six years after Ramlal-Nankoe’s final semester teaching at the college in Fall 2008. She taught at the college for 11 years.

Nancy Pringle, vice president for human and legal resources, said the college thought there was no employment discrimination, and Suddaby confirmed that belief. Pringle said the college is happy with the result of the case.

“All the claims that were raised by the plaintiff, Dr. Ramlal-Nankoe, the court found to be without merit, and there was found to be no issue of fact and therefore ruled on the basis of the memorandums of law that had been submitted by both sides and decided in the college’s favor,” Pringle said.

Ramlal-Nankoe was hired at the college in 1997 and underwent her first tenure review in 2006. After she was denied tenure for failing to meet the institution’s necessary requirements, Ramlal-Nankoe appealed the decision and was put on a two-year probationary period on her tenure.

In 2008, the Department of Sociology again denied tenure to Ramlal-Nankoe. In response, she hired Lynne Bernabei, an attorney in Washington, D.C., who sent an 11-page letter to President Tom Rochon and William Schwab, then-chair of the Ithaca College Board of Trustees. In the letter, Bernabei said Ramlal-Nankoe had met or exceeded the standards for teaching, service and scholarship, and therefore should be granted tenure. The letter focused on Ramlal-Nankoe’s anecdotes, which suggest how she was discriminated against for her political views on the Israeli-Palestinian conflict and the tension between her and Julian Euell, then-chair of the Department of Sociology, regarding her political views and how openly she expressed them in the classroom. At the end of the letter, Bernabei requested that the board of trustees grant Ramlal-Nankoe tenure to avoid a “long and protracted legal case.”

Ramlal-Nankoe’s first point stated she was discriminated against because of her age. In an affidavit by Traevena Byrd, associate counsel and director of equal opportunity compliance, Byrd said Ramlal-Nankoe filed a claim at the Equal Employment Opportunity Commission on March 2, 2009, but only checked the boxes for race, sex, national origin and retaliation, not for age and religion.

The second point stated that Ramlal-Nankoe filed for sex discrimination, which the college’s memorandum of law said the court should dismiss because it falls outside its jurisdiction.

Point three stated how Ramlal-Nankoe cannot receive relief because her cause of action is not timely. According to the college’s reply memorandum of law, the only appropriate way for a plaintiff to challenge the college’s execution of its policies is an Article 78 proceeding in New York State Supreme Court, not the United States district court where the case is filed.

According to Page 6 of document 40, “a plaintiff who fails to commence an Article 78 proceeding within the four-month statute of limitations is prohibited from recasting her claim as a breach of contract claim.” Ramlal-Nankoe took longer than the four-month limit.

In another point of untimeliness, Ramlal-Nankoe did not respond to the college’s argument in the original memorandum and therefore lost her legitimacy to continue challenging the college because she took too long to take action.

The fifth and final point the college made is that the plaintiff did not find enough evidence to prove the college denied her tenure based on sex, race or retaliation claims.

Page 7 reads, “Ramlal-Nankoe has not produced even a shred of evidence upon which a reasonable trier of fact could rely to conclude that she has established … sex discrimination, race discrimination or retaliation.”

In conclusion of the college’s attempt to prove Ramlal-Nankoe’s case is not valid, the college requested that “this Court grant its motion for summary judgement, dismiss Ramlal-Nankoe’s amended complaint in its entirety and grant such other and further relief that is deemed to be just and proper.”

Currently, the case is dismissed, but Pringle said Ramlal-Nankoe may appeal in a higher court.